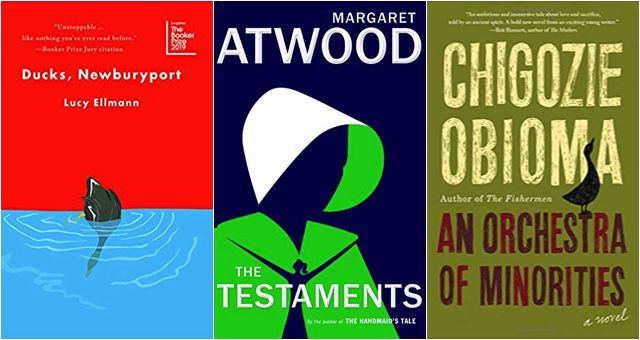 The 2019 Booker Prize Shortlist has been announced! This year’s shortlist includes six novels that span the globe, with the notable return of two previous winners of the award—Salman Rushdie, who won in 1981 with Midnight’s Children, and Margaret Atwood, whose The Blind Assassin won in 2000. First awarded in 1969, the Booker Prize is open to writers of any nationality writing in English and published in the UK or Ireland. This year’s shortlist was selected from 151 submitted books. The winner will be announced October 14.

Gaby Wood, Literary Director of the Booker Prize Foundation, writes of the shortlist: “It was hard to watch the judges narrow down their longlist to this shortlist: they were so committed to all 13 of the books they’d chosen just over a month ago that the discussion was intense. Still, these six remain extraordinary: they bring news of different worlds; they carry a wealth of lives and voices; they’re in conversation, in various ways, with other works of literature. I think it’s fair to say that the judges weren’t looking for anything in particular—they entered this process with an open mind—but this is what they found: a set of novels that is political, orchestral, fearless, felt. And now, by association, those six will be in fruitful conversation with one another.”

We are pleased to announce our #BookerPrize2019 shortlist. Watch what our judges had to say about the six selected books. #BookerPrize2019 #FinestFiction #BookLoversDay #shortlist #announcement pic.twitter.com/eq3LdFsohE

10 Minutes 38 Seconds in This Strange World by Elif Shafak