Do you like dungeons with your dragons? Or maybe you prefer to find paths (or stars)? Maybe you just want that old school RPG feel without the hassle of a gaming group. We’ve got you covered.

Will there be dice? You bet your +1 orb of randomization there will be dice! 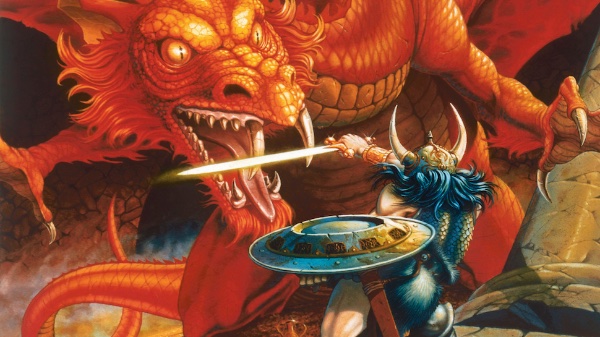 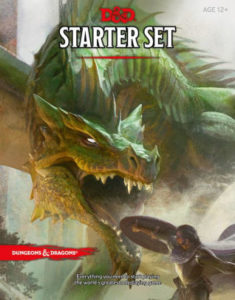 Let’s start at the very beginning (a very good place to start) with the Dungeons & Dragons Starter Set. It’s got five ready-to-play characters, a rulebook for the players, an adventure guide for the dungeon master, and a set of dice. It also has a blank character sheet if you want to roll your own character. If you’re looking to introduce someone to D&D, or you just want to try out the system and see how it’s different from the others out there, it’s a great way to get your toes wet. You’ll probably want to pick up a basic RPG map and some minis, since none come with the box. Oh, and extra dice (keep reading for suggestions). Believe me, sharing dice is only fun until someone rolls a 1 and then hands you the d20 for your roll. You don’t want that cursed polyhedral anywhere near you! 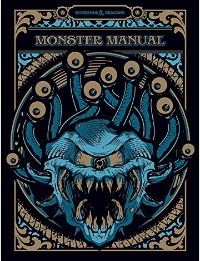 Once you’ve moved past the Starter Set, there are three books that most D&D players (and every dungeon master) needs: the Player’s Handbook, the Dungeon Master’s Guide, and the Monster Manual. Wizards of the Coast has put together an absolutely stunning set of these three rulebooks, along with a limited edition DM screen. Featuring art-deco style cover art by Hydro74, they just look exactly like you’d expect portals leading to arcane worlds, dangerous magics, and fearsome monsters to look. There’s also a Dungeons & Dragons Core Rulebooks Gift Set that’s about $20 cheaper and features foil printing, but it doesn’t have the impact of the Alternate Covers set. This set takes the gift of D&D from “exciting” to “mind-blowing.” 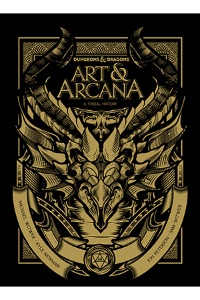 Of course, if you’re just in D&D for the amazing art, we’ve got you covered there too. Just released last month, the Art & Arcana book is an exhaustive 450-page tome that wends through the 40-year history of Dungeons & Dragons. D&D has always been defined as much by its art as the rules that make up the game, giving countless players a jumping off point into creating their own worlds. D&D has also inspired scores of artists over the decades to create some of the most fearsome, beautiful, and exciting works of fantasy art ever seen. If that was all Art & Arcana had, that would be enough, but the Special Edition adds even more with an amazing cover by Hydro74, 10 posters, and a pamphlet-sized printing of the original Tomb of Horrors adventure module by the master, Gary Gagax himself. Simply put, if you have a D&D fan in your life, they will love this book. 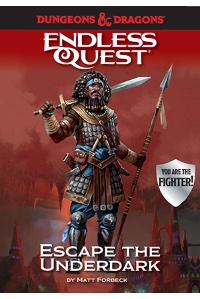 Remember Choose Your Own Adventure? Back in the day, Dungeons & Dragons had their own brand called Endless Quest. Author Matt Forbeck has brought them back with a new series, each centered around a core D&D class. There’s the fighter in Escape the Underdark, the wizard in Big Trouble, the rogue in To Catch a Thief, and the cleric in Into the Jungle. Each are smartly written, do an excellent job of not telegraphing which choice is the “correct” one, and have multiple endings, letting you play through the book again and again. They’re a great way to bring a little bit of dungeon crawling to your day when your game group can’t get together. 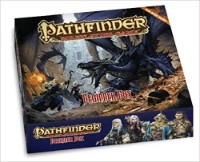 Pathfinder was originally created as an offshoot of a previous D&D ruleset (essentially, it was for fans who enjoyed the nuance found in a more complex set of rules). Despite its somewhat erudite beginnings, Pathfinder has evolved into one of the most accessible fantasy RPGs. Along those lines, its Beginner Box far outshines the D&D set. It comes with four pre-generated characters (the “iconics” that you’ll see in the artwork throughout all of Pathfinder’s various books and comics), a Hero’s Handbook and Game Master Guide, and a set of dice, as well as a flip mat for adventuring, and cardboard miniatures for your characters and monsters. What I love is that the Hero’s Handbook lets you play an adventure solo, acting as a “GM-in-a-book” to teach you the basics of the system. When you’re ready, you can continue on with the adventure in the GM Guide (where, spoiler, you get to fight the dragon on the cover of the box). The ruleset taught isn’t simplified like the D&D Starter Set’s either—this is real deal Pathfinder and gives you the best idea of how well you’ll like the game. I highly recommend it for anyone that wants to play an RPG but doesn’t yet have a system preference. 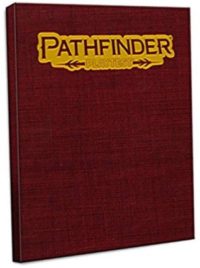 For the Pathfinder or RPG fan that wants to have a say in the next generation of Pathfinder, this is the book to get. The Pathfinder Playtest is currently underway, with a draft rulebook available for fans to try out and comment on the second generation of the Pathfinder ruleset. Paizo has set up forums for playtesters so they can gather feedback and find out what works and what doesn’t. Initial impressions are very positive, with playtesters enjoying the more simplified play flow and rewards for roleplaying that still manages to keep the crunchy numbers that have always been Pathfinder’s core. The Deluxe Rulebook is a limited edition that adds an attractive hardbound cover (though it’s nothing like D&D’s limited editions). The caveat is that you’ll need to pick up a new book in a year when the finalized rules are released. But then the feeling of satisfaction, knowing you helped shape those rules, is a pretty good one. 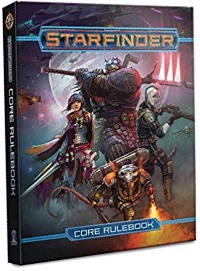 But what if you’re not interested in dungeons or dragons? What if you prefer starships and aliens? Paizo has you covered there as well. Their newest game gets rid of their home planet of Galarion (literally) and replaces it with a space station. From there, you can choose one of half a dozen alien races, classes, and roles and set out on adventures across the Pact Worlds. Discovering lost technologies, uncovering corporate espionage, and risking everything in the depths of asteroids in the far flung reaches of space. Paizo has done an amazing job of taking the fantasy base of their core product and adding on science fiction trappings. You’ll still encounter dwarves, but they may be cybernetically enhanced. There are dragons and elves, but they control planetary societies. At the same time, there are also intergalactic swarms of sentient insectoids, aliens who are nothing more than brains in floating jars, and disembodied spirits of travelers, trapped by the void of space. Paizo has created a veritable playground of a setting for anyone who wants to try their hand at sci-fi RPGs. 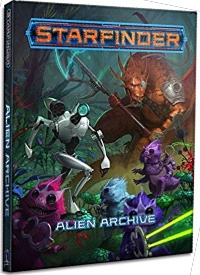 For those that have already dipped their tentacles into Starfinder, the Alien Archive provides statistics and background information for over 80 weird and wild creatures that inhabit the Starfinder universe. With amazing art and engaging descriptions, the Alien Archive does more than just offer up creatures to throw at adventurers. Hidden amongst the slavering alien hordes are sentient creatures that players can use to create their own characters. It’s a must-have for anyone who’s playing Starfinder. 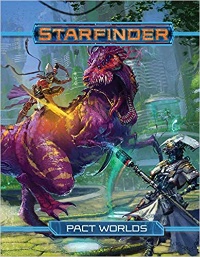 While the core rulebook and the adventure paths themselves give a lot of information about the universe that your characters are playing in, this supplement offers an exhaustive examination of each of the Pact Worlds in the Starfinder home star system. With details on biome (or lack thereof), history, governance, and more for 14 major worlds, it’s everything a player needs to craft deeper backstories for her characters. There are also additional archetypes and player races, giving players even more options for crafting exactly the kind of play experience they want to have. Plus, there’s a purple alien T-Rex on the cover and details of a world that’s ruled by dragons. I’m not made of stone here, people! 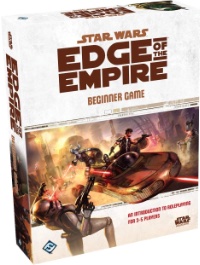 If Starfinder is still too rooted in swords and sorcery for your liking, travel to a galaxy far, far away with the Star Wars roleplaying game. Like the other starter sets, the Beginner Game box has pre-generated characters, rules for players and GMs alike, plus maps, dice, and tokens to use for characters and creatures. What I love about the Star Wars RPG system is that it encourages you to role play and think of unique solutions to situations. There is a “Destiny Pool” that players and GMs can draw from, using the die there to give themselves a bit of luck (or throw a wrench in someone else’s plans). Being a Fantasy Flight Games product, the rulebook is…verbose (the joke is that FFG designers must be paid by the word), but the game they’ve produced is faithful to the Star Wars movies. The Star Wars RPG is easily the most fun I’ve had with a roleplaying game in years. It’s highly recommended for anyone who wants to try something new. 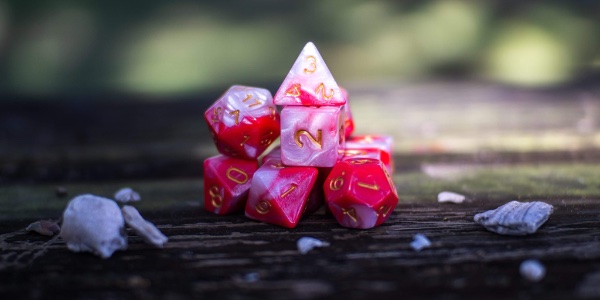 One of the joys of starting an RPG habit is that you get to develop a healthy dice addiction as well. Other than the Star Wars RPG, which uses proprietary dice, everything on this list will need a set of dice to roll for damage, skill checks, etc. Some of my favorite include the limited edition Huntress Set from Skullsplitter (shown above). They’re swirly white and red with gold numbering and look positively snackable. Kraken Dice are another dangerously addictive dice company to follow. Something about the way they mix their colors make their dice sets irresistible. Their semi-precious stone dice are amazing, but their resin dice are just as jaw-droppingly gorgeous. The only trick is finding a set in stock (they usually sell out within a few hours of being posted to the site). 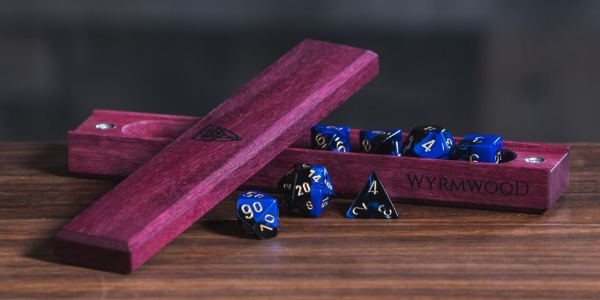 Once you have your dice, you need a way to transport them! You could schlep them around in the bag they came in, but the discerning gamer knows that dice are precision weapons and must be treated as such. That’s why I prefer Dice Vaults from Wyrmwood Gaming. They come in a variety of woods, from relatively inexpensive red oak to the jaw-droppingly deluxe gabon ebony. Each handcrafted piece is held together with strong rare earth magnets and the interior foam keeps your dice from rolling around. You can get custom engraving as well—maybe one for each of your characters? Wyrmwood has other fun things on their site as well. I’m a fan of their Personal Dice Trays, which help contain your wild rolling. If you’re willing to wait, I’d recommend checking out their Adventurer’s Arsenal preorder, which combines the Personal Dice Tray and Dice Vault, and adds space for storing your character’s miniature and a hand-turned pencil, which brings me to my last item… 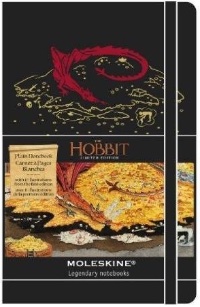 One thing you’ll have to do as a player or GM is take notes, lots of notes. And there’s no better way to take handwritten notes than in a Moleskine journal, period. Their lie flat binding and stone smooth pages make note taking effortless. Plus, they look amazing. While there are a number of licensed properties you can choose when picking your Moleskine, from Looney Tunes to Marvel Avengers, the obvious choice for the erudite adventurer is this notebook based on J.R.R. Tolkein’s The Hobbit.

Sign up to The Goods to receive emails about new products and promotions in the Book Riot Store.
Thank you for signing up! Keep an eye on your inbox.
By signing up you agree to our Terms of Service
Check out our picks for 2020's most anticipated books!