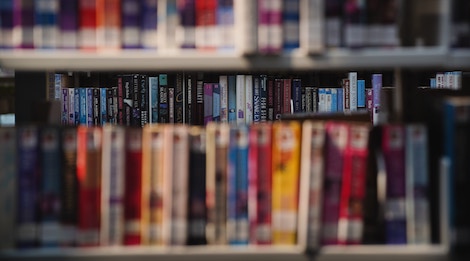 I attended the Texas Book Festival in Austin back in October and I have to say, the festival was the best I have been to. And I have attended the festival on numerous occasions. Why was it so much better this year than in previous years? Because the Latinx Lit tent was straight fire! I did not move away from that tent the entire festival because every author spoke with such a passion and they evoked the Latino/a spirit of courage, pride, humility and honesty. Listening to Luis Alberto Urrea speak was a dream come true, but the Latina authors were just on another level. They truly are amazing women.

Historically, Hispanics have been marginalized and in light of all the racist comments, tweets, and stories being disseminated, now is the time to talk about Hispanic literature and culture. In my opinion, it has never been more relevant. It has always been comical to me that those who are not Hispanic want to steal our culture and claim it as their own here in the U.S., yet they hypocritically deny our people every chance they get. It is an injustice to Latino/a men and women everywhere. John Leguizamo said it best when he said, “We’re not taught anything that we contributed to this country and we’ve been around for 500 years.” At the end of the day, it’s institutional racism. Most will deny it, but I beg to differ.

So, here are some amazing reads by fascinating Latina Women:

I am Not Your Perfect Mexican Daughter by Erika L. Sanchez 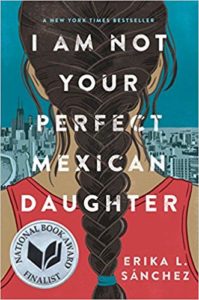 Winner of the Tomas Rivera Mexican America Children’s Book Award, instant New York Times bestseller and finalist for the National Book Award, I am Not Your Perfect Mexican Daughter is a remarkable read. When Erika Sanchez spoke about her book at the festival, she spoke about how women are held to higher standards than men and are expected to be without flaws. If they are not, they are criticized harshly. Most Mexican daughters, for those of you who do not know, are supposed to be even more perfect. They are not supposed to leave for college and they do not move out of their parents’ house after they graduate high school. So, Erika Sanchez decided to write this book about Julia, a young woman who is not the perfect Mexican daughter. She is beautifully flawed, blunt, angry and just an all-around bad ass. (Spoiler alert) Julia loses here sister Olga due to a tragic accident in Chicago and she is left trying to reassemble the broken pieces of her family. She is shattered and hurting just as much as her family, but nobody seems to acknowledge it. Julia’s mother is harsh and points out all the ways Julia has failed instead of acknowledging her pain. But Julia discovers her sister may not have been as perfect as everyone else assumed she was. She, too, had flaws and Julia, with the help of her best friend and her boyfriend, is determined to find out. This book truly is great and I highly recommend it. 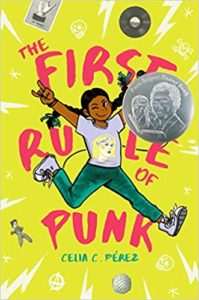 Winner of the Tomas Rivera Mexican American Children’s Book Award and a 2018 Pura Belpre Author Honor Book, The First Rule of Punk is another great read. Like Julia in Sanchez’s book, Malu is the bad ass woman protagonist in this book. She, too, is beautifully flawed and is the epitome of punk! Malu loves to upset her middle school’s queen bee and she constantly breaks the school’s dress code with her punk rock look. She disappoints her college professor mom along the way but always remembers her father’s (who lives a thousand miles away) words, “Things will get better as long as you remember the first rule of punk: be yourself.” Malu loves zines and skateboarding and soon finds herself starting a band with like-minded individuals. And when she no longer feels like an oddball, she does everything she can to preserve her punk rock ways. Even if it means going up against the anti-punk school administration. All Malu wants to do is express herself creatively and not be judged for it. This book is a great examination of finding yourself and standing out in a crowd like no one is watching.

Category ID: 477
Category ID: 476
Category ID: 468
What’s Up in YA? Newsletter
Sign up for What's Up In YA? to receive all things young adult literature.
Thank you for signing up! Keep an eye on your inbox.
By signing up you agree to our Terms of Service

All Around Us by Xelena Gonzalez 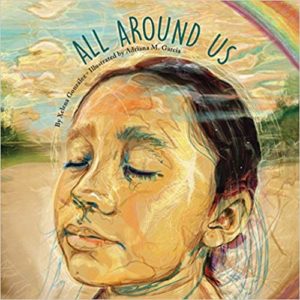 Winner of the Tomas Rivera Mexican American Children’s Book Award, 2018 Pura Belpre Illustrator Honor Book, and 2018 American Indian Youth Literature Award: Picture Book Honor, All Around Us will captivate you with its words and one-of-a-kind illustrations. Xelena read the enitre book while on a panel at the festival and I, along with others in the crowd, was deeply moved with the book’s central message: That everything around us is within us and is a circle of life. No matter how far away we get from the places we laid our roots, we will always be drawn back to the beautiful earth and patches of land we will always call home. The grandfather in the story shares his wisdom with his granddaughter and explains to her that seeing a rainbow in the sky only points to half of it. The rest of it is down below, in the earth. The two examine the trees, grass, seeds and the earth where our bodies come from and where they return to. This is a great book that will leave you mesmerized. I recommend you read this one to your children.

Someone Like Me: How One Undocumented Girl Fought for Her American Dream by Julissa Arce 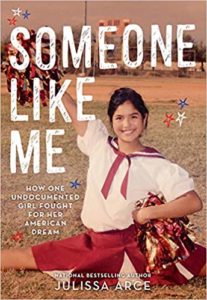 From National Bestselling author, Julissa Arce, (My Underground American Dream) comes this remarkable story about the author’s actual journey to belong in America while growing up undocumented in Texas. This story is a fascinating one that will resonate with dreamers across the country. Many dreamers will relate to this story because they, too, have experienced institutional racism and an avoidance of the law to keep a clean slate. When Arce spoke on her panel with award-winning author Yuyi Morales, she spoke of her experiences growing up in Texas and of being afraid of just driving over the speed limit. While others had to be mindful of the law, she had to be doubly cautious to ensure she could remain in a place where she knew she belonged. Her story is blunt, gripping and just an all-around good read for anybody interested in knowing more about those who live American lives while undocumented. 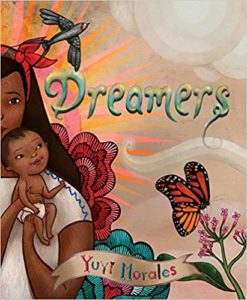 An instant New York Times bestseller, seven starred reviews, winner of Publisher’s Weekly Best Book of 2018, and voted New York Public Library’s Best Book of the Year, Dreamers is an amazing and colorful read that will captivate readers of all ages. There is not much more I can say to add to the greatness that is Yuyi Morales, but this book, in my opinion, is extra special. Yuyi spoke of her experiences coming to the U.S. with her son, and of her journey to becoming the great author that she is. Her devotion to her son and her yearning to make a difference in the lives of others who have experienced a life similar to hers comes out in her writing. All of her books have been amazing but if you have never read a Yuyi book, then this is the one I recommend starting with. Her illustrations are truly one-of-a-kind and the entire story is just touching and powerful.

The Latinx author pool is deep. There are so many talented authors that do a great job of highlighting Latino/a culture, so I invite you to start with these. Appreciate and respect the culture, too. There is so much beauty in this world and it is never too late to learn about cultures and people you are unfamiliar with. Happy reading!