If you were a child in the last three decades, chances are pretty high you had at least one encounter with Marcus Pfister’s The Rainbow Fish. I came upon the book again recently and could not remember the plot, but the images of the shiny scales were familiar and I recalled doing a small unit around the book in elementary school, where we designed our own rainbow fish. When I found the book again, I decided to give a quick read, figuring it might be something I used at story time.

It turns out The Rainbow Fish is actually pretty messed up. Let’s go page-by-page, shall we? 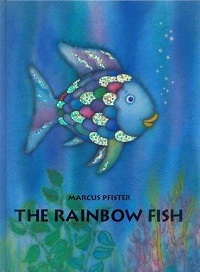 Pfister starts the book off with the narrator describing how beautiful the Rainbow Fish, who does not otherwise have a name, is. He has laser focus on the physical beauty here, but I’ll give him that, since it’s a metaphor. Okay, cool.

Before long, we learn the Rainbow Fish’s beauty is the source of his woes. The shiny scales scattered among his more typical fish scales make him beautiful and, therefore, seemingly better than anyone else. When the other fish encourage Rainbow Fish to play with them, he “would just glide past, proud and silent, letting his scales shimmer.” What an ass.

But, okay, books—especially picture books—are often about character development and lessons learned. Certainly not all of Aesop’s protagonists are likable from the start.

But then it just gets gross, especially if you’re having a literal reading.

“Please give me one of your shiny scales. They are so wonderful and you have so many.”

Now, before we start screaming about socialism, I want to point out that the other fish are literally asking Rainbow Fish to dismember (okay, so he doesn’t have limbs, but that’s essentially what’s happening here) himself for their own aesthetic purposes. That’s messed up. And what’s worse? When the Rainbow Fish, understandably, I think, says no, everyone ostracizes him. Of course, Rainbow Fish apparently thought he was too good for the rest of the fish, anyway, so maybe this isn’t a problem for him, but still—“From then on, no one would have anything to do with the Rainbow Fish [because he refused to harvest his own body parts for their enjoyment]” is harsh.

It seems the Rainbow Fish does care, however, because with no one willing to interact with him, there is also no one who is there to admire his “dazzling, shimmering scales.” Frankly, I don’t have a lot of sympathy for Rainbow Fish, but his co-fish are pretty awful, too.

Why is everyone so obsessed with the bodily removal of the Rainbow Fish’s scales? What is this, some kind of ocean take on Saw?

The Rainbow Fish leaves the octopus behind and, on his return to the colony, happens upon the blue fish who asked for scales in the first place. Despite the Rainbow Fish’s earlier refusal, blue fish just doesn’t get it and asks again with language that sounds like classic manipulative language to me: “Rainbow Fish, please don’t be angry. I just want one little scale.”

Hey, blue fish! He said no.

Except by now, the Rainbow Fish has been swayed by the creepy octopus and agrees to—let me just say this again—dismember himself for the gratification of this annoying fish who won’t take no for an answer. Messed. Up. (I suppose to Rainbow Fish’s credit, here, he only provides the “smallest scale”—I’m looking for ways to be lenient here because it’s a children’s book, but Pfister makes it awfully difficult.) The blue fish then “tuck[s] the shiny scale in among his blue ones.” Great, so now we have a Franken-fish situation. Gross.

Soon enough, all the other fish are gathered around and clamoring for their own cut of the Rainbow Fish’s scales. (Seriously, what is wrong with these fish?) It’s a total frenzy. And Rainbow Fish is just taking it as he “share[s] his scales left and right.” Wow. You know that surprised Pikachu meme? That’s my face right now.

Pfister’s narrator instills the moral of the story with, “And the more he gave away, the more delighted he became.” So, maybe it wouldn’t be a bloodbath—note: do not Google “fish blood” or “rip scales off fish” during lunch—but still. This is horrifying.

And this is only if you take the story literally!

Let’s take a quick look at the metaphor, shall we? The message here is that if there is something special about you, you can count on people to love you for it, you might be inclined to believe you are better than others because of this special thing, and if you ever want to be happy, you better plan on giving that special thing away to others or otherwise hiding it.

It works okay, I suppose, if your special thing is a great talent for playing the violin—yes, please do share your talent with the world (but no pressure)! But for people whose special thing is not as easily shareable, like being book-smart (or “gifted” as they like to use in education), you might be better off hiding it, unless you want to do everyone’s homework for them.

The Rainbow Fish might be a children’s picture book classic, but sometimes our old favorites are worth a closer look. In the case of this beautifully-illustrated work, it has not aged particularly well. From a disturbing metaphor involving—let me say it one more time—self-dismemberment to a message that basically says, “Don’t be special. If you are special, people will hate you for it and the only way to be happy is to shed yourself of that special trait,” The Rainbow Fish does not stand up to the test of time.

What are some of your childhood favorites that haven’t quite held up?