There are few things in my life that define me as wholly as my love of books and reading. My now husband always references the fact that I was sitting reading a book for the first time he laid eyes on me. He found it remarkable. To me it was rather ordinary. Books and reading are a long-standing tradition in my self-identity. But it wasn’t until recently that I fully realized the impact they’ve had on my own thoughts and feelings. More specifically, how they’ve influenced my thoughts on femininity, womanhood, and gender. 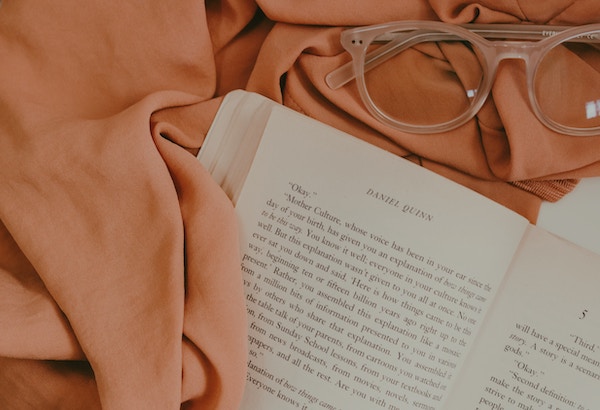 Let’s start with Elementary school Danielle. While living in a small town, the library was a refuge unlike any other. It was there I found myself drawn to books like the Strawberry Shortcake, Nancy Drew, and Karen: Little Sister series. Hindsight shows me that these formative reading experiences shaped the way I viewed my gender immeasurably. They were full of deep female friendships and daring adventures. Unfortunately, they were also steeped in patriarchal views of what women should be like and were packaged in the most stereotypical ways.

Then there was middle school Danielle. She was just starting to take ownership over herself and discover that she not only had opinions, but that they often differed with what society wanted from her. Surrounding herself with characters like Hermione Granger, Princess Mia, and the Sisterhood of the Traveling Pants. These female characters gave me the strength to speak my mind, encouraged me to read and write more, and actively worked to change the world around them. That being said, they also emphasized the role of romantic relationships with men and undid a lot of the work that my previous reading had done to show me the value of female friendships. If your girlfriends aren’t there to hear you talk about the boys you like (i.e. Sisterhood of the Traveling Pants) or to provide you with a viable dating option in the form of a brother (i.e. Mia in the Princess Diaries) they just don’t exist at all (i.e. Hermione in the Harry Potter series).

High School Danielle was really lucky. Thanks to her hard work and love of books, she was given the opportunity to take an Advanced Placement English class. This meant that I was able to choose the books I read instead of following the mandated curriculum. At the time I didn’t think much about it, but in hindsight I’ve recognized that when given the choice I read exclusively female authors. Diving into the works of Jane Austen, Margaret Atwood, and the Brontë Sisters shaped my understanding of history and feminist writers immeasurably. However, my experience was unique and I was constantly reminded that this level of choice in what to read was a privilege at my school, not a right. The impression of superiority thrust upon me wracked me with guilt when I chose to deviate from my reading list and engage with books that academia considered unworthy. It also gave me a narrow view of gender and the world, as the works were often those of white women.

This narrow vision of feminism as being white and middle class continued on in my university coursework. As a theatre major I was met with reading lists full of Joan Macleod, Caryl Churchill, Judith Thompson, and Kristen Thomson. The rest were overwhelmingly white men, which often made me annoyed and upset. The academic rigour of university often drained me and much of my extra-curricular time was spent watching television/movies. Reading for fun left me with even deeper feelings of guilt than before, because the stories I gravitated towards were often written for young adult audiences and featured strong female heroines (this was my era of Katniss Everdeen, The Divergent series, and Cinder). This, in the eyes of academia, made them unworthy, which in turn tainted my own ideas of their value.

A few years ago I decided to read only female authors for an entire year. A decision derided by a lot of online publications, including Jezebel. However, as I continued on into that year I found that what I was craving and discovering were stories I never would have previously picked up. Somehow, deciding to read in a world with a singular identity actually made way for a multitude of viewpoints and styles. There were memoirs (like Forward by Abby Wombach) and graphic novels (like This One Summer) and nonfiction collections (like Hidden Figures) and creepy fantasy horrors (like The Ghost Bride). My world and my views were opened up and I started to see how all of the other reading I had done had impacted and limited my own views and ideas. My eyes had been opened and I kept reading voraciously in an attempt to learn more and more of what I felt had been hidden/kept from me.

This year, when given the option of what to cover as a delegate for the Toronto International Festival of Authors, I chose 100% female authors. I saw panel discussions that talked about the construction of gender and how it relates to feminism and power, a double interview of a female biographer and her subject (a female creator who has often been silenced or ignored in her career), and an interview with one of the great contemporary female authors working to re-tell classic canons from a distinctly female perspective. As I sat and listened to these incredible authors and thinkers speak and later read their words I was left with two clear thoughts:

I am so grateful for the words of authors and artists like: Vivek Shraya, Madeline Miller, Rachel Giese, Sarah Henstra, Buffy Sainte-Marie, and Andrea Warner. As well as for the opportunity TIFA gave me to sit with these thoughts and continue this work.

Now I’m off to do more reading and hopefully continue walking down this path of un-learning or relearning.

If you’re looking for further reading for your own un-learning I’d recommend the piece on Reading as a Way to Refuel by Nicole Froio or Christina Orlando’s Intersectional Nonfiction 2018 List.