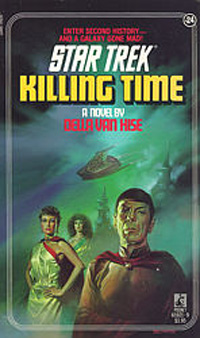 Killing Time. It is a name spoken in revered whispers among certain Trekkies. Originally, in 1985, it was just another Star Trek novel published by Pocket Books. But then a few fans thought they noticed something, well, queer about it. According to legend, author Della Van Hise, an open Kirk/Spock shipper, intentionally slipped in some slashy content. When Trek creator Gene Roddenberry found out, he pitched a fit and demanded that Pocket Books recall and revise the book. Pocket Books complied, but a few copies of the original version are still out there.

Like most legends, it’s an interesting story. But is it true?

Well, Killing Time certainly exists, and there are certainly multiple versions of it. The original features lines like “Kirk sighed and reached out to cover the Vulcan’s hand with his own. Men like Spock weren’t standard issue” and “Something stirred inside him…something ancient, something familiar.”

While that does sound suspiciously like every fanfic I’ve ever stayed up late reading, were these lines really meant as a dog whistle to the author’s fellow slash fans?

According to Van Hise herself, no. She was hired to write a novel, not fan fiction, and that’s precisely what she did. “If people chose to see overtones of K/S in [Killing Time],” Van Hise said in one of her many public statements on the subject (seriously, leave the poor woman alone already!), “maybe it’s because there were overtones of K/S throughout Star Trek itself.”

The story behind the recall is also boring. There were multiple manuscripts of Killing Time floating around, each with corrections and suggestions from different invested parties, including Paramount, which owns Star Trek. And since publishing is a long and complicated process dependent upon many busy individuals who can easily misinterpret or lose track of communications with each other, the wrong manuscript went into print. Once Paramount found out, they asked for and got a rewrite.

What happened, then? Did Roddenberry change his mind by 1985? Was he okay with slash in fanon but not in canon? Was he angry about something other than the alleged subtext? All unanswerable questions, unless someone wishes to pull a Spock and die just long enough to ask Roddenberry about it themselves.

So are the legends about Killing Time being a stealth slash fic true? Doesn’t look that way. But in the end, does it matter? Why should authorial intent be more important than fannish enjoyment? If slash is your thing and you’re looking for something new to read, Killing Time may just amuse you. Heck, it may amuse you even if slash is not your thing. It’s up to you—or, as Van Hise put it, “it’s all in the eye of the beholder.”