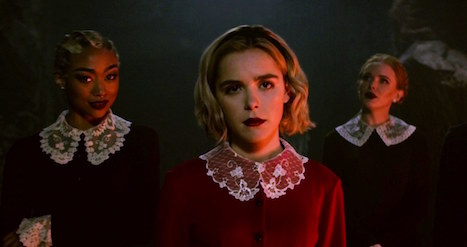 The Satanic Temple made good on its threat to sue Netflix and Warner Bros. on Thursday, filing a $50 million copyright suit accusing them of ripping off the temple’s statue of Baphomet to fuel “Satanic panic” in the Netflix series “The Chilling Adventures of Sabrina.”

But this was not always the case. My own institution, the Bodleian Libraries in Oxford, created a restricted class, a special category for books that were deemed to be too sexually explicit. These books were given the shelfmark Φ – the Greek letter phi – and students had to submit a college tutor’s letter of support in order to access the racy materials that were contained there. The Bodleian was certainly not alone in this approach to risqué books: one of my first jobs as a curator was in the National Library of Scotland, and the equivalent shelfmark there was frequently the target of break-ins which must have been perpetrated by library staff. (It is a closed-stack institution and only the librarians knew where such good stuff was kept.)

On the Bodleian Library’s Phi collection, which was designed to protect young minds from “immoral” books (going on display for the first time).

“Good Night Stories for Rebel Girls,” a bestselling children’s book featuring 100 stories of prominent women, was published in Russia this year – but with one story missing.

Liza Lazerson, a feminist blogger who owns a copy, said she was surprised to see that while the cover promised 100 stories the book contained only 99 and one blank page – supposedly for the reader to add their own.

The Russian publisher removed the story of a transgender girl due to Russia’s 2013 ban on the spreading of “propaganda for non-traditional sexual relations” to minors.