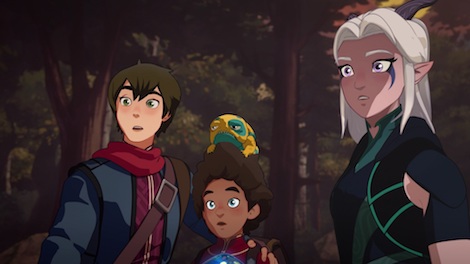 Have you watched The Dragon Prince on Netflix yet?

This original series from the creators of Avatar: the Last Airbender gives us a delightful fantasy world where elves and humans are at war because the humans murdered the last dragon prince (still an egg), except…it turns out the egg is still alive? And the human princes team up with a young elf to try to bring the egg back to where it belongs. Oh, and by the way, the elf is sworn to kill one of the princes, but she decides not to and that decision might kill her.

My family and I marathoned season 1 and loved it. The world-building is similar to that of Avatar in that you’re given the backstory you need upfront and the rest comes out simply and organically. In general, I hate fantasy info-dumps, but The Dragon Prince manages to present the information as a story that I just want to hear more of.

Just as Avatar: the Last Airbender was divided into seasons/books by the elements (Water, Earth, and Fire) and The Legend of Korra was divided by further elements and concepts (Air, Spirit, Changes, and Balance), The Dragon Prince is set to be divided into types of magic—primal sources—used in the world of Xadia, starting with season 1, Moon. There is room, based on the presumed formula, for another five or six seasons (Sun, Sky, Star, Earth, Ocean, and potentially Dark).

The good news is there will be a season 2 (no word yet on which primal source it will draw upon):

Return to a world of magic, friendship, and dragons in 2019. Are you ready for Dragon Prince Season 2? pic.twitter.com/fQs2mEs7Tu

There is also a video game in the works, which got me thinking about other media I would enjoy seeing set in this world. (Hint: all of them.)

Both Avatar: the Last Airbender and The Legend of Korra were expanded and continued in comic book form, and I would love to see a comic run (or two, or a hundred) set in the world of The Dragon Prince. May I suggest a prequel, a la The Steel Prince? Please and thank you.

A fellow Rioter recommended an in-universe series for kids starting with Ezran’s Guide to Care and Feeding of Glow-Toads, which I love.

And how about some books about the history of Xadia narrated by Callum and Rayla, a la Rick Riordon’s mythology books in the Percy Jackson universe (also a fellow Rioter’s suggestion)?

There is a Deaf character who uses sign language in The Dragon Prince (she is shown signing and a hearing character interprets verbally), and seeing a disabled character who is a general in the army was incredible for me—a hearing person—so I can only imagine how it is for Deaf viewers. There is also (minor spoiler) a plot line in the last few episodes that initially looks like disability erasure but plays out in a way that, while I was not 100% comfortable watching, I think ultimately shows that disabled people (and non-people) are whole just as they are.

I’m not sure exactly what I’d like to see more of here, but I would definitely like more. General Amaya’s Sign Language Dictionary, perhaps? S.W. Sondheimer suggests: “A whole comic arc done the way Fraction and Aja did the issue where Hawkeye lost his hearing aids.” Or what about an app for kids that incorporates sign language lessons, animation, and a game element?

Speaking of Apps for Kids

What about an app version of the video game? How about an elf dress-up game? Adopt and raise a dragon egg—take good care of it so it can hatch! I am not an app developer but I am quite sure that alllllll the apps my kids love could be adapted or riffed on to create some fun games set in the world of The Dragon Prince.

This is where my heart lies. Please oh please give me an RPG set in this world. The possibilities are endless, but at the very least I will need a player’s guide, a game master’s guide, and a sourcebook for each magic faction. Okay, and maybe also some adventure modules. And maps. Give me all the maps, please.

I play Dungeons & Dragons and other RPGs with my children, who are 8 and 12, and would love to have more options for gaming with them—especially options that don’t require learning a complex system or adapting an existing one (though I am happy to make tweaks). Ideally, I’d like something with more flexibility than Hero Kids and less complication than D&D; Marvel Superheroes is my sweet spot, and I am also a fan of Savage Worlds, which can be adapted for any setting…hint, hint.

(Bigger hint: I am available to write these source books. Call me.)

Jonathan Strange & Mr. Norrell is Being Made into a Board Game

How Avatar: the Last Airbender Can Acknowledge Its Inuit Roots