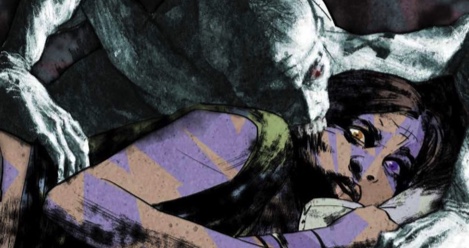 Far from the Javits Center, deep in the bowels of the New York Public Library’s Stephen A. Schwarzman building, in a room with a glass-domed ceiling that stretched 30 feet into the air, I felt somewhat out of place in my red tights and Marvel comic combat boots. But I had decided to start my ComicCon not in the throng of cosplayers zombie-marching up and down the aisles in Artist Alley, but across town, in an attempt to answer a question that had been nagging at me for the past year:

With all of the smart cultural commentary being published in response to the garbage fire that is our world lately, why was I so damn hungry for horror comics?

The folks behind Image Comics had put together a panel that would hopefully address my question. They had gathered together writers and artists from two of their more recent titles—Infidel and the forthcoming Bitter Root—to talk about how their books were especially adept at tackling real-world issues. For the next 45 minutes, they spoke of how the interweaving of supernatural and real-life horror forced readers to interrogate their assumptions about the world around them.

I could have listened to them talk for hours.

The Best Horror Is About Helplessness

When I think about the most terrifying nightmares from my childhood, I remember a recurring nightmare in which I am adrift in a vast sea, floating farther and farther away from my house which, inexplicably, bobs in the middle of an ocean. The worst part? I am floating on my back and, for some reason, cannot move my arms. There is nothing I can do to save myself.

When asked what makes for good horror, David F. Walker, the author of Bitter Root, mentions a “complete lack of control.”

Category ID: 18121
Category ID: 1074
Category ID: 13095
The Fright Stuff Newsletter
The latest and greatest from the world of horror
Thank you for signing up! Keep an eye on your inbox.
By signing up you agree to our terms of use

Horror comics shine in the way they magnify this sense of helplessness. In Infidel, for example, the protagonist is beset by mysterious entities that are brought forth by the hatred and xenophobia of others. She is helpless to escape these entities, just as she is helpless to control what others think and feel about her. The way in which Pichetshote’s comic plays these two forms of helplessness against each other is brilliant.

The news cycle has been beset by devils and angels. People who are wrong, and people who are right. As a result, we’ve neglected to discuss the gray areas that exist at the heart of the most difficult issues. When faced with the question of what makes for good horror, Pornsak Pichetshote, the author of Infidel, says that true horror is “being confused and not knowing what the right answer is.”

Horror amplifies this not knowing. In Victor LaValle’s Destroyer, we see how an act of racially charged violence pushes a grieving mother to make difficult choices. In the end, we are forced to ask ourselves: Is she hero or villain? It’s an impossible question to answer.

What is clear, however, is that this woman has become consumed by the same hate and rage that led to her initial loss. Which adds a layer of complexity to the reader’s—and the protagonist’s—dilemma.

Similarly, in Bitter Root, the main characters work to cure those who Walker jokes have been “infected by all the things that have made American great again.” He’s referring, of course, to racism, sexism, xenophobia, and other societal ills. These infected humans have become monstrous creatures. Later on, one character—who has managed to escape infection, but who has become consumed by his hatred of them—finds that he has “become the monster that created him.”

The monsters that run rampant in horror are often metaphors for the real monsters we encounter in everyday life. Sometimes, the message is overt. Other times, it’s something that burrows beneath the skin, making you think about the book long after you’ve shut it. For me, the best horror has never been about guts and gore. It’s been psychological. It’s been the stuff that haunts my nightmares, waking and otherwise. As we’ve been faced by the horrors of our day, how have we responded? What have we become?

The best Horror Makes You Think: What Would I Do?

Horror often inspires us to ask: What would I have done? We say that we never would have run up those stairs. Entered that dark basement. Gasped aloud just as the killer walked by the closet in which we were hiding. But—faced with the actual thing—would we live up to this idyllic version of ourselves?

For me, this question is a close cousin the one we ask ourselves when faced with the atrocities that often occur in the real world. The question of what would I do in this situation? so often leads to what can I do now?

And then there is the visual element. It’s easy to see how horror is well suited to cultural commentary. But where does the graphic component come in?

For me, it is in the sense of dread that builds in me when I see a particularly well-done image.

In Infidel, it is the first two-page spread in the very first issue of the series, in which we see an evil entity crawling over the protagonist as she struggles to fall asleep. The way Aaron Campbell and José Villarrubia approached their visual representation of these evil entities is some kind of dark magic. 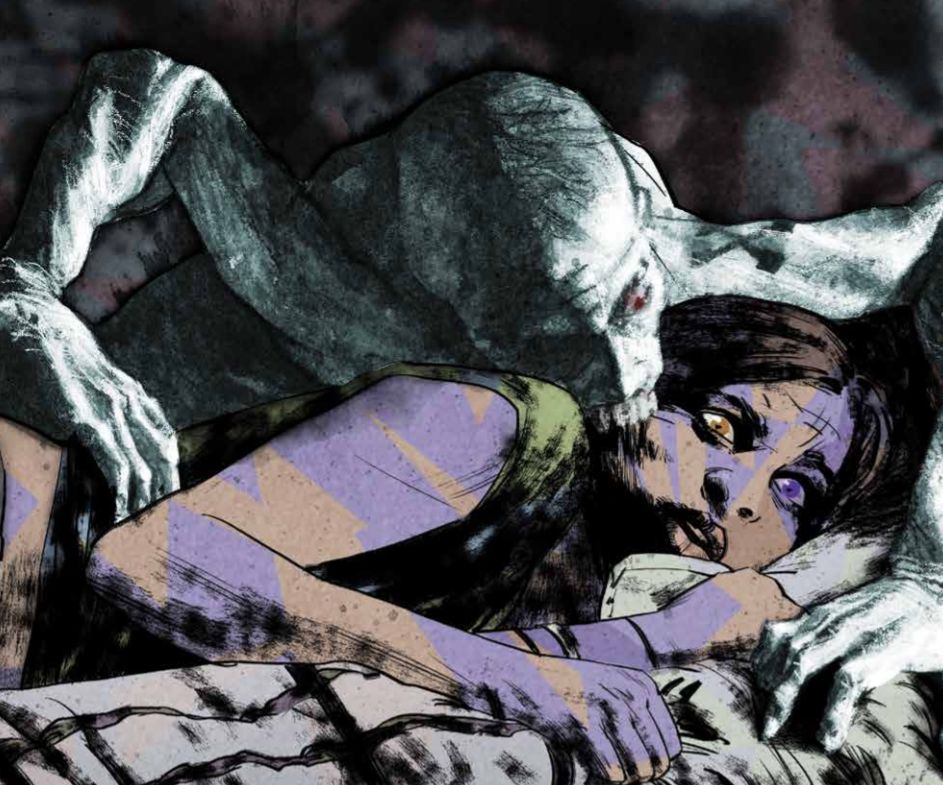 In Victor LaValle’s Destroyer, it is a half-page panel in the fifth chapter, mostly dark except for a smattering of light. This panel shows us the heartbreaking truth behind the death of the protagonist’s young son. All hail the talented Dietrich Smith.

And in Winnebago Graveyard, it is the play of light and color and texture created by Alison Sampson and Stephane Paitreau that combines to create an atmosphere of inescapable, heightened terror. 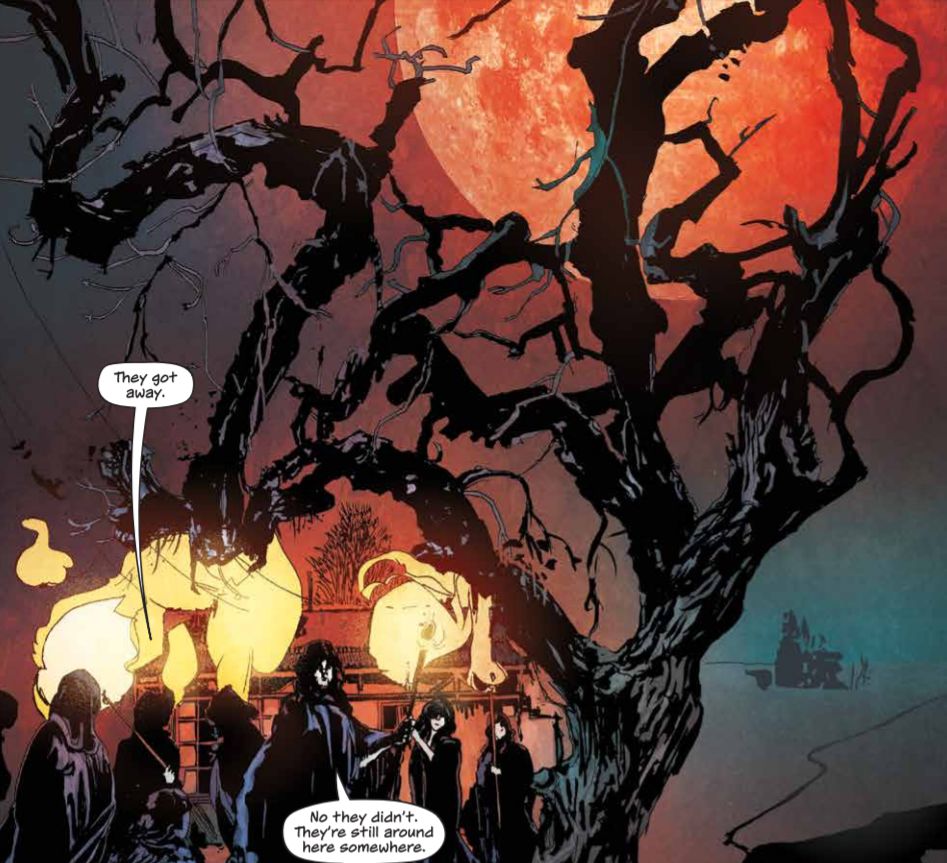 Perhaps the answer to my initial question—why am I reading horror comics at a time like this —lies in the fact that, in my exhaustion over the news cycle, I would prefer to examine these day-to-day horrors obliquely, rather than head-on. What better way to do this than through the visually sumptuous, metaphor-heavy world of horror comics?

Do you find yourself doing the same?