When I read YA novel Inkmistress by Audrey Coulthurst earlier this year I was expecting the same kind of fun light queer fantasy I had found in Coulthurst’s first book, Of Fire and Stars. (I remember fellow Book Rioter Danika saying the first book was like Frozen, but more gay. She was absolutely right). I was really surprised, however, to find that Inkmistress ended up being much more to me than a fluffy queer fantasy YA. And that was because of its treatment of bisexuality. 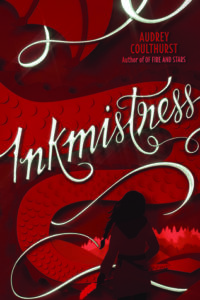 As I sat down to write what I thought was going to be my usual quick Goodreads review, I found myself writing a lot more than I had intended. Once I was deliberately thinking about the bisexual representation, I realized Inkmistress was doing something I had never really seen before.

Inkmistress is a story about love and found family above all things. One of the main plot lines that investigates those themes is the central romance, between Asra, the protagonist, and Hal. Hal is  a boy who is at first Asra’s reluctant travel companion, then a friend, and then a lover. It’s a sweet, wonderfully done romance.

A lot of bisexual women and girls struggle with feeling not queer enough or that their queerness is invalid, especially if they’re in relationships with men/boys. Inkmistress is a wonderful counterpoint to that without ever being preachy or didactic. Yay for empowering bisexual YA!

Back to the actual novel: in fact, Asra’s love for Ina—and the dangerous path it sets her on, misusing her blood magic as a demigod—is what sets the plot in motion. After Asra’s spell that was supposed to help Ina goes horribly wrong, she is forced to follow Ina across the kingdom to stop Ina from making a terrible mistake that could have far-reaching, grave consequences. Significantly, though, Asra being bisexual is irrelevant to the plot. This is despite the fact that her ex-girlfriend is key to the story. Either her ex or her current partner could have been someone of any gender and it wouldn’t have made a difference.

It was when I had that revelation that I really recognized that Inkmistress was doing something new with bisexual representation. Other plot lines often found in bisexual books (especially YA) were similarly missing: there wasn’t a love triangle where one interest is a boy and the other is a girl and it wasn’t about a girl who has only dated boys falling for a girl for the first time. It’s not that books that feature those narratives or that make bisexuality a main topic are bad or uninteresting. But it is unbelievably refreshing to read a book about a bi character that doesn’t feature any of those occupations. (Sidenote: Inkmistress is also set in a fantasy world with no bi/homophobia, which is always lovely to read.)

Category ID: 9969
Category ID: 480
Category ID: 468
What’s Up in YA? Newsletter
Sign up for What's Up In YA? to receive all things young adult literature.
Thank you for signing up! Keep an eye on your inbox.
By signing up you agree to our terms of use

The more I think about it, the more Inkmistress feels like a radical bisexual book. Not only does it not make the protagonist’s bisexuality a plot point, it also avoids the typical plot lines often given to bi heroines. Here’s to more empowering bisexual representation that break the mold!