“Why Coming Out is a Creative Endeavour” is sponsored by She/He/They/Me by Robyn Ryle. 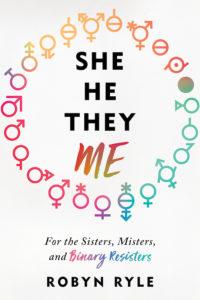 Hypothesis: the acts of reading, writing and coming out all reflect a belief in the power of words to constitute, not merely describe, one’s reality.

At 14, I came out to mum. I’ve no memory of it, it was that easy. I can’t even picture where it happened. (Mum says the kitchen.)

Both of us had long known. I can’t recall why I choose that exact moment. I wasn’t afraid, I wasn’t experimenting, and I never expected less than her total acceptance. The only explanation that makes sense to me now is that I was testing out the word.

Seeing how it sounded. How I sounded.

And I sounded kind of gay.

Soon after, I told my mum’s boyfriend. We were on holiday in Spain. The night before, I got drunk for the first time and passed out. On the night in question, in the interests of science, I drank a bottle and a half of wine to see what would happen.

Then they got back and I tried to stand up and talk.

It was messy but sweet. And he was very sweet about it.

Leaving aside my alcohol content, I kept wondering why I found “G-uh” a hard word to say.

At 29, the word still doesn’t feel comfortable in my mouth. It’s fine as a prefix. Gay-march or gay-rights or gay-anything, really. But if I don’t say anything immediately after it, I feel uneasy. Why?

Your mouth stays open, lips parted, when you say it. So there is a physical exposure to mirror its declarative content. The word itself disappears: a single syllable, barely a word. Depending on the listener, it might be the sound of an anticlimax or the sound of a bubble bursting.

When I say it, I always feel like I’ve not said enough. I say “I’m gay”, and a burden of unanswered questions presses at my back. I’m afraid I’ll never have time to address them all.

At least ‘homosexual’ gives you four syllables’ worth of breathing space. That’s something. 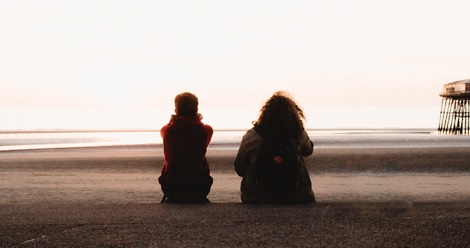 At 26, I told a friend. We taught at the same school. By this point, we’d known each other 18 months, six of them under the same roof.

I hadn’t told her because we had radically different world views. I was afraid to look at the difference too closely. I mentioned Darwin once — that was enough.

But I was heartbroken, full-fat adolescent, and she asked why I was always tired.

“I thought you were sick or something.”

“I thought you’d think I was sick or something.”

“What?” She laughs, full-throated. “Look at your head!”

This is affectionate mockery; she isn’t suggesting that I’ve got horns there.

“But sir”, says Sharif, “all I’m saying is, they should all have rights and everything yeah, but if one of my friends was like that, I’d be messed up. I wouldn’t know how to be around them. I’d be questioning myself all the time.”

It’s near the end of a day near the end of the school year. There are five of us in the classroom: me, two boys, two girls. The rump of my lower-sixth tutor group. I’m at my desk by the whiteboard, boys to my left, girls to my right.

“Sharif, you know that I’m gay?” The girls visibly react. The boys, not so much. “I have straight friends. Being around gay people doesn’t make you gay.”

Sharif respects my honesty. All the same, he doesn’t choose to stick around, and we never discuss it again.

“What do gay people do?” one of the girls asks.

“Lots of things,” I say, adding, guiltlessly for once, “Google it.”

I’ve never had difficulty coming out to those close to me. What bothers me is how anxious I feel about telling casual acquaintances. To people at my weekly badminton club, for example.

It’s the fear of being defined by one thing about yourself. This is why I think many gay people put it off. They hope to reach a point where they are ready with answers to all the likely questions. And while they may reach that point of preparedness, they can’t have answers to all of the questions that remain unsaid. Not all of them.

Coming out involves accepting that other people may have thoughts or ideas about you as a result, which you will never have access to but may, regrettably, still spend time worrying about.

Here lies a parallel with book publishing: a person coming out and an author both cede some control over their stories.

An author accepts that readers will draw their own meaning from their words. Anyone who comes out accepts that part of their story is now also subject to interpretation. A writer trusts that her loss of control is outweighed by the discovery of what she shares with her readers. A person comes out to better understand their self, what it is that one is ‘coming out’ as, and, through the reactions of others, what it means to be ‘gay’ in the circumstances of one’s life.

All too often, I think I stay closeted because I don’t want to know something about myself. It’s not really about how others will react. It’s just that…I’d prefer not to know that it still bothers me what total strangers think of me.

Here’s the thing though: it wasn’t until I sat down and wrote this that I realised it bothers me.

You put something into words and words bring other things to the surface.

I’m still a man though.

What’s wrong with the other gays?

Nothing, but this is my story, not theirs.