Circe by Madeline Miller has been optioned for a TV series! The author of Circe and The Song of Achilles announced the news on her Instagram.

Toasting some thrilling news with my trusty water bottle: Circe has been optioned for a TV series!!! Flying back home after meeting with the fabulous team in LA, including the brilliant writers. More details soon! #excitedexcited #Circe #witchofaiaia

“A bold and subversive retelling of the goddess’s story,” this #1 New York Times bestseller “manages to be both epic and intimate in its scope, recasting the most infamous female figure from the Odyssey as a hero in her own right” (Alexandra Alter, The New York Times). 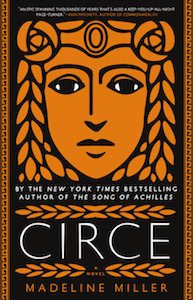 Circe is born into the house of Helios, god of the sun, but she’s unlike the other gods. She’s not powerful like her father or gorgeous like her mother, the nymph Perse. She does, however, have the power of witchcraft. Threatened by her powers, Zeus banishes her to a deserted island. On the island she grows stronger, honing her craft, and also crossing paths with some of the most famous figures in all of mythology, including the Minotaur, Daedalus and Icarus, Medea, and, of course, Odysseus. Circe is a “triumph of storytelling.”