Access to a safe, legal abortion should not be up for debate, no matter one’s personal values. Sadly, in many places it still is. Those who seek abortions are often—if not always—shamed into silence. Some women, especially in rural areas, have to travel great distances to get one. It was only this year that Ireland held a referendum to repeal the 8th Amendment to decriminalize abortion. On Prince Edward Island the abortion ban wasn’t lifted until 2017. Moreover, in America, women’s rights and reproductive freedoms are rolled back every day. The attack on Planned Parenthood continues, the international gag order continues, and the possibility of overturning Roe V. Wade looms large. Right now we need some good, accessible nonfiction books about abortion that normalize it. 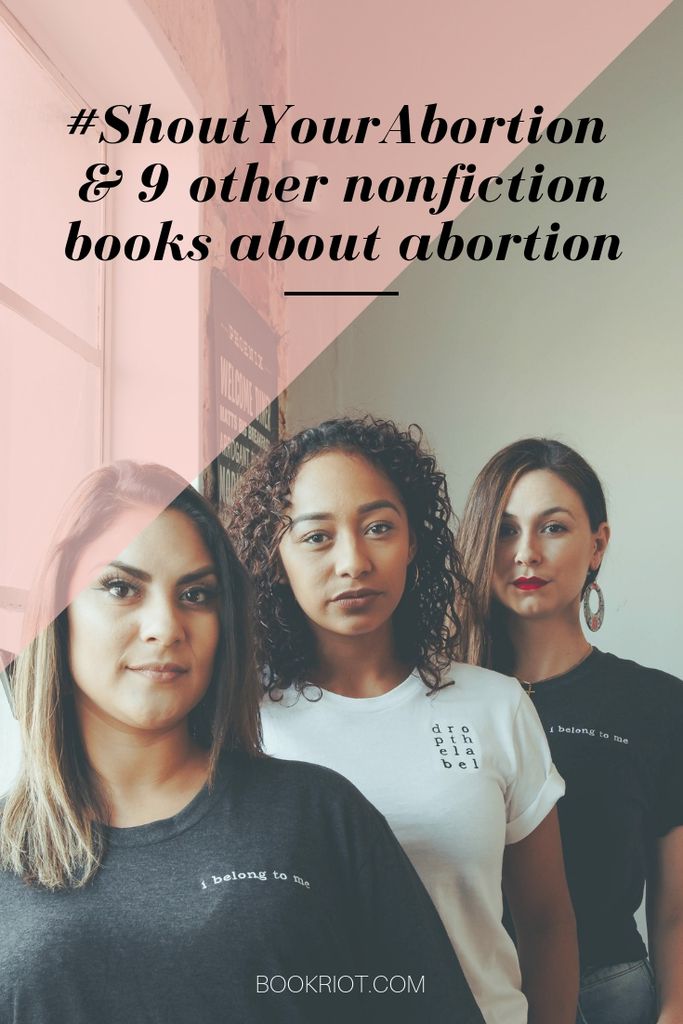 When Congress first wanted to remove federal funding from Planned Parenthood in 2015, the hashtag #ShoutYourAbortion began as a way to normalize stories about abortion. It went viral and became a movement. It’s now an organization, and they continue the work of normalizing abortion. Abortion is normal. Abortion is not a dirty word. Abortion is necessary. Abortion is safe. Many abortions are not traumatic.

Now, Shout Your Abortion is coming out with a book and I am so here for it. It’s on kickstarter right now, so if you’re interested in grabbing a copy, back them and preorder it. If you want to shout your abortion, shout about abortion in general, and/or start the conversation around normalizing it, here are some great nonfiction books about abortion! 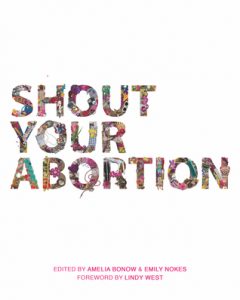 Shout Your Abortion edited by Amelia Bonow and Emily Nokes

With the hashtag #ShoutYourAbortion going viral, sparking a movement, and turning into an organization, its creators are now coming out with another way to normalize abortion and build community: a book! It’s a collection of photos, stories, essays, and other creative works to refuse shame and to normalize abortion. It’s a call to action, and many of the kickstarter perks include things to start your own movement and conversation in your own community. 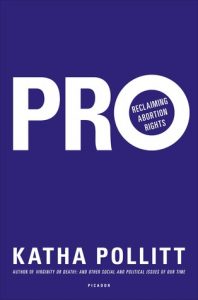 “It’s as if we think motherhood is the default setting for a woman’s life from first period to menopause, and she needs a note from God not to say yes to every zygote that knocks on her door—even if, like most women who have abortions, including my mother, she already has children. There is deep contempt for women in that—and disregard for the seriousness of motherhood as well.”

Even though Roe vs Wade was over forty years ago, abortion is still a dirty word. And even though it’s a normal, necessary, and important part of a woman’s reproductive life. Abortion is not something that everyone agonizes over, and it’s not something that a woman should have to qualify. It’s safe, legal, and as Pollitt would argue, a social good. So why are women’s reproductive rights being rolled back every day? Pollitt calls us to action: we need to reclaim our rights to abortion. 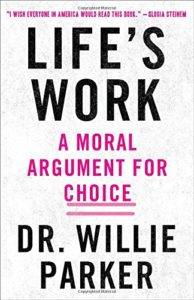 Willie Parker is a Christian reproductive justice advocate and abortion provider. And he’s doing this in the Deep South. At first this seems counter-intuitive. Aren’t many anti-abortion groups associated with the Christian church, especially in the South? However, Dr. Parker has found that his faith propels him to non-judgmentally provide this service to the women who need it—especially women of colour and women in poverty. Here he talks about the different elements and values that affect his beliefs and his life’s journey that brought him to this important work. 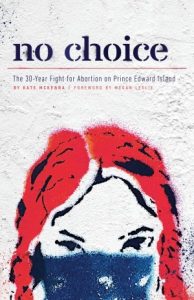 No Choice: The 30-Year Fight for Abortion on Prince Edward Island by Kate McKenna

Kate McKenna is an esteemed Canadian journalist for the CBC from PEI. In No Choice, she dives into abortion access in Canada and how legality and access are not the same thing. When abortion was decriminalized in 1969 (with R. vs Morgentaler removing many legal barriers in 1988), it did not mean that women would now be able to easily access this service. On Prince Edward Island, it’s been something activists have had to fight for for 30 years. With a strong anti-abortion contingent funded by the Catholic church, the abortion ban on the Island wasn’t lifted until last year. This was a hard-fought and long-awaited victory that came at a great cost to its activists (literally and figuratively). In No Choice, McKenna tells the story. 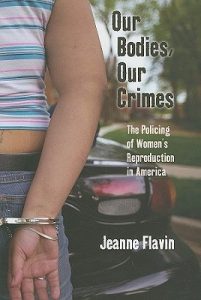 Our Bodies, Our Crimes: The Policing of Women’s Reproduction in America by Jeanne Flavin

In Our Bodies, Our Crimes, Jeanne Flavin looks past the immediate issue of abortion (though it’s certainly covered) to look at the issues behind it. Flavin discusses the barriers that women, especially women of colour and women in poverty, face when having and parenting their children. She talks about how the state wants to define what a “good” woman and mother look like while policing and dehumanizing us. Our Bodies, Our Crimes is “at its heart…about the right of a woman to be a healthy and valued member of society independent of how or whether she reproduces” (Goodreads). 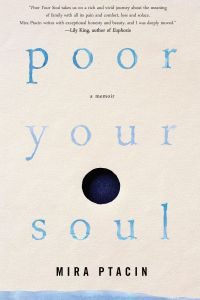 This book covers another side of abortion. In this memoir, Mira Ptacin reflects on the loss of her pregnancy. She became pregnant unexpectedly, but was excited to have a baby. She was engaged and happy. Further along, doctors told her unfortunately the pregnancy wasn’t viable. The child would not be able to live outside of the womb. She had two options: she could terminate the pregnancy or wait for an inevitable miscarriage. Ptacin grapples with this loss alongside her mother. Many anti-choice folks don’t consider that later term abortions are only provided in times like these or when the mother’s safety is at risk. Abortions are an important part of women’s reproductive health and lives. 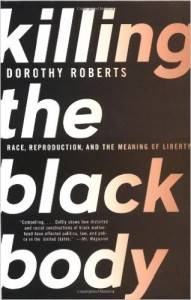 Killing the Black Body: Race, Reproduction, and the Meaning of Liberty by Dorothy Roberts

This book is not explicitly about abortion, but it does talk about it. Instead, through a black feminist perspective, Killing the Black Body discusses the ways black women’s bodies are controlled and even criminalized. Roberts uses history and politics to highlight the ways black women’s reproductive lives are affected by the history of slavery. Not only are black women affected by the same systems that oppress all women, but they are doubly affected due to intersecting systems of racism. Here Roberts seeks to address policy that affects black women’s bodily autonomy, their ability to control if and when to have children, and the ways they are able to parent their own children. 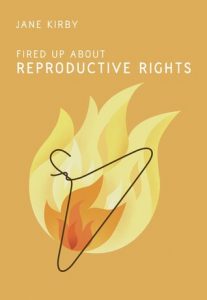 Fired Up About Reproductive Rights by Jane Kirby

Reproductive rights are human rights. Although R. vs Morgentaler decriminalized abortion in Canada in 1988, and Roe vs Wade decriminalized abortion in the U.S. in 1973, 30+ years later we’re still fighting for those rights. Here, Kirby talks about reproductive rights, like access to safe and legal abortions, but she also discusses the broader movement of reproductive justice began by women of colour. While many white women fight for their right to not have children, women of colour fight for those rights alongside the right to actually have and parent their children. This book isn’t only about abortion. It’s about the ways reproductive rights are tied in with other social justice issues and the  intersecting nature of the many barriers women face. 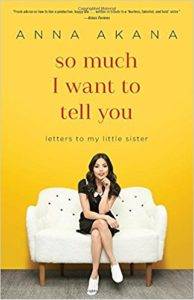 So Much I Want to Tell You: Letters to My Little Sister by Anna Akana

This popular YouTuber and comedian lost her little sister to suicide a few years back. In this heartfelt memoir, she talks about personal experiences she wishes she could share with her sister. Though not explicitly a book about abortion, in it Akana shares her own abortion story. The openly sharing of these stories breaks the silence and helps normalize abortion. 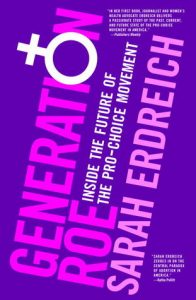 Generation Roe: Inside the Future of the Pro-Choice Movement by Sarah Erdreich

In Generation Roe, Erdreich provides an overview of the state of reproductive justice in America. Through both the personal and the political, Erdreich critically examines the Pro-Choice movement. She talks about things that are working and things that aren’t. She looks at the stigma women still face, the dangers of providing abortions, and the way abortion is portrayed in pop culture. As she examines both sides of the debate, she argues that the pro-choice movements needs to re-center the discussion on women—not on party politics, hyper-focus on Roe vs Wade, or anti-choice rhetoric. When we focus on these things it waters down the movement. It shows how the movement has been manipulated, it allows room for gradual anti-choice changes, and it perpetuates shame and stigma.

Do you have a nonfiction book about abortion to recommend? Drop it in the comments!

Looking for more? Check out Books to Make Sense of Abortion Rights, HB2, and Scotus, Abortion in YA Lit, and Why We Need Abortion Stories in Our Fiction.