Quite by chance, I found out the other day that this September is the 35th anniversary of the release of Alanna: The First Adventure (1983), by Tamora Pierce. It’s funny to think that Alanna’s first book is already 35 years old, and that I wasn’t even born yet the year it was published, given the profound impact that this book has had on my life.

It’s my desert island book; it’s the book on my shelves that I have owned the longest. My copy is sun bleached and cracked along the spine, and if I stick my nose between the pages they will smell like a hundred long days spent with my childhood best friend, pretending to be palace pages out among the prickly juniper bushes behind her house.

But only if you want to get technical.

Alanna was my role model when I was a child. I cut my hair like hers, I refused to wear skirts, I wanted to have great adventures. I insisted on having every book Tamora Pierce ever wrote. I was absolutely obnoxious (sorry Mom), but I was so happy. And while I’m not a child anymore (technically…) I keep Alanna: The First Adventure on my shelves for one indisputable reason: this book changed my life.

It sounds dramatic, but really it’s a very simple truth. I was 10 years old when I read it for the first time, and the impact it had is still very clear to me as I look back at my life. Who I am as a reader, who I am as a writer, and who I am as a person have all been affected by my deep love of this one little, brightly colored, 216 page book; by Tamora Pierce and her boundless imagination; and by a prickly, temperamental redhead, with whom I have far too much in common.

Which is why I am here to say: 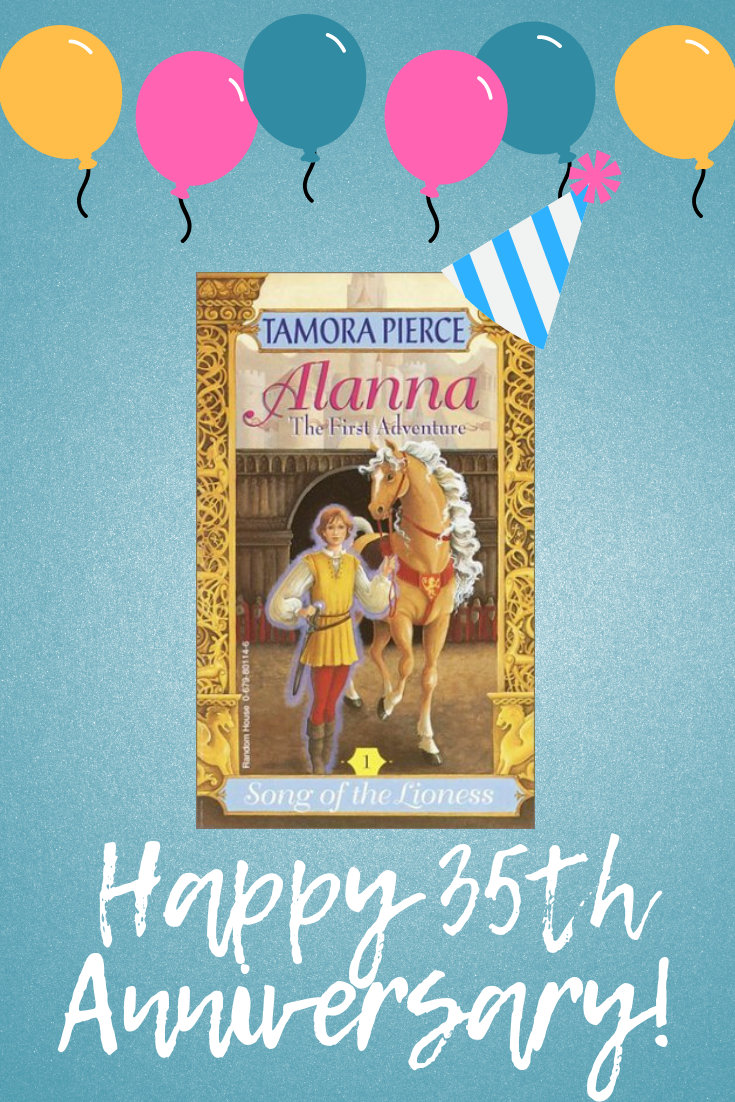 If you have never read any of Tamora Pierce’s books, Alanna: The First Adventure, first in the Song of the Lioness quartet, is the perfect place to start. Along with being Pierce’s first book, Alanna: The First Adventure is also the gateway to her expansive Tortall universe. Chronologically it’s no longer the first book; that honor belongs to Terrier, the story of the ancestor of one of the main characters in the Song of the Lioness quartet. But for many readers, their journey began with Alanna.

And when I say that the Tortall universe is expansive, I’m not exaggerating. What began as one quartet became two with Wild Magic and the rest of The Immortals, then three with First Test and the Protector of the Small series. Followed by a duology (Trickster’s Choice and Trickster’s Queen), and then the Beka Cooper trilogy that begins with Terrier. Recently Tamora Pierce has taken the world yet further with Tempests and Slaughter, which released this February.

Like most lengthy series, the Tortall universe can seem daunting to new readers, but it’s well worth taking a chance on. This Reading Pathways post on Tamora Pierce can give you a bit more detail about her many Tortall books, and where you might like to begin. But trust me when I say that if you want strong but flawed female characters, enthralling world building, magic both beautiful and terrible, sword fighting, epic battles, and seemingly impossible god-given quests, this is the series for you.

If you don’t need to hear any of this, because you too are a Tortall fan from way back, high five me. Then go check out this awesome tribute to the many memorable secondary characters in the Beka Cooper trilogy. Also known as “the trilogy of pain and suffering of which we do not speak”…but that gets a bit wordy.

I could talk for hours about Alanna and Tortall. Days really. Longer, given that I’ve been pushing it on all my reading friends for *mumble mumble* years. But for today at least, there’s only one thing left to say:

Here’s to many more.

Sign up to Swords & Spaceships to receive news and recommendations from the world of science fiction and fantasy.
Thank you for signing up! Keep an eye on your inbox.
By signing up you agree to our Terms of Service
#Science Fiction/Fantasy#Young Adult Literature#alanna#Tamora Pierce#tortal