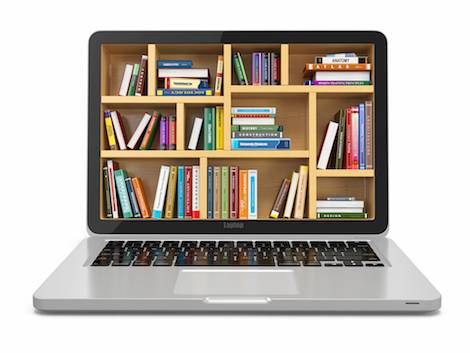 On September 18, a reader noticed that all the issues of FIYAH literary magazine had been deleted from Goodreads. Executive Editor Justina Ireland noted that other speculative fiction magazines had not been given the same treatment. 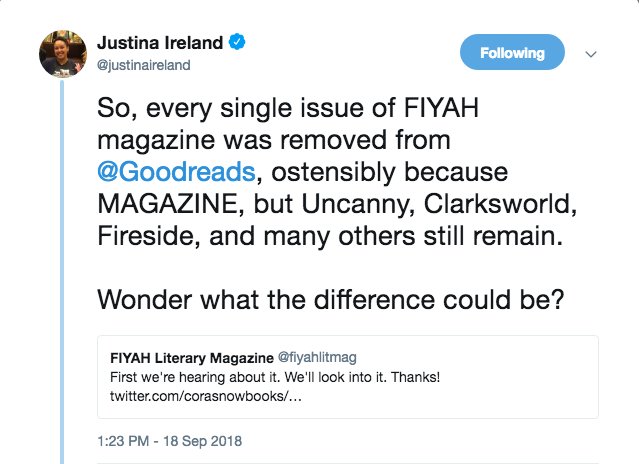 (Note: We’re using screenshots of Justina’s tweets rather than embedding on her advice.)

If you’re not familiar with FIYAH, by the way, now’s a good time to correct that error. Following in the footsteps of the Harlem Renaissance’s Fire!!, FIYAH is a quarterly magazine of black speculative fiction. (Full disclosure: I am a subscriber of FIYAH, and let me tell you, it’s cutting edge and damn good. I am also a supporter of Fireside, mentioned later, and Twitter friends with Troy and Brian.)

Brian J. White, founder of Fireside Magazine, which is notably also the home of the #BlackSpecFic Report, immediately took to the Goodreads forums to demand an explanation.

All of @fiyahlitmag has been deleted from @goodreads. Most other spec fic mags are still up. A GR librarian says mags not allowed on GR, but removal is spotty cause it's too daunting, which sounds like someone went to extra effort to delete #BlackSpecFichttps://t.co/B27W1JZddv pic.twitter.com/9ejv6KN807

The above tweet basically summarizes this screenshot, which is also included. But it’s noted that the magazine Brian J. White founded, Fireside, was still on Goodreads at the time, while FIYAH has been deleted on the grounds of it not belonging.

I encourage you to read the entire thread, which starts on that tweet. There are lot more screenshots. I’ll also note that since this began, all but the first three issues of Fireside (which have ASINs) have now been removed from Goodreads as well.

Shortly thereafter, the editors of Anathema Magazine found out that they, too, had been summarily removed from Goodreads.

Well. Anathema's off @goodreads now too, alongside @FIYAH. (Best cool kids table ever!) Mostly so, in our case, as there's still artifacts of it on the site. See the image.

This is possibly related to our lack of ISSNs, yes. & hey, ISSNs are great cataloguing tools, true. BUT -> pic.twitter.com/f8O5Cw1ZkA

Anathema is a three-times-a-year free online magazine that focuses on speculative fiction by queer POC/Indigenous/Aboriginal writers.

The near-simultaneous removal of the only two speculative fiction magazines that exclusively publish Black writers and writers of color does not seem like a coincidental thing. There is ample cause for people in speculative fiction to be on the alert for activity like this. Speculative fiction is a small field—which is why you notice when two magazines suddenly vanish from site like Goodreads—and it’s had serious problems lately with the racist machinations of groups like the Puppies and even individuals who, for example, are just really upset about N.K. Jemisin winning so many Hugos even though they’ve never bothered to read her books.

As the other Executive Editor of FIYAH, Troy L. Wiggins says (referring to responses like this one):

not gonna go too deep, but I will say that I am very disappointed in the responses from the @goodreads librarians on this thread. To suggest that @fiyahlitmag was maliciously removed from GR listings is not preposterous, because racism isn't fantasy. https://t.co/O8GV1pD9Gf

Justina Ireland also makes the important point that how rules are enforced matters: 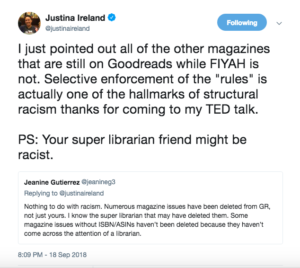 The Goodreads librarian who deleted all of Anathema Magazine and some of the issues of FIYAH has since responded on the Goodreads thread, saying the removals were not malicious and other magazines were also deleted at that time. Screenshot courtesy of Brian J. White from this tweet. 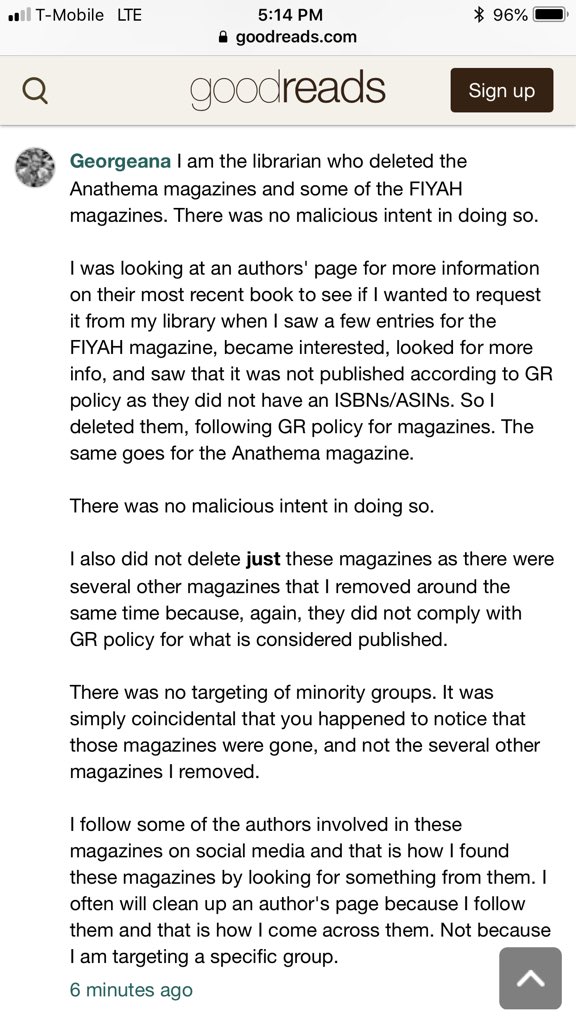 The Goodreads sticking points seems to be that periodicals without ISBNs and ASINs should be removed. ISBNs are not necessarily easy or cheap to get, particularly if you’re operating on a shoestring budget…which can be an issue particularly for marginalized creators. ASINs are the unique identifier assigned to products when they are sold on Amazon’s website.

In what is perhaps the most head-exploding revelation of this entire debacle, Brian J. White discovered (tweet) that it is not necessarily Goodreads policy as stated on their own site to require ISBNs for periodicals. See this help topic, “Not a book.”

* periodicals without ISBNs but substantially similar to books (e.g., perfectbound literary magazines), although they should be typed as “periodical” in the work: media type field

Between the nebulous ISBN policy exception (what does “substantially similar to books” actually mean?) and the examples of what else Goodreads does allow (coloring books?) the removal of FIYAH and Anathema seems even more arbitrary.

A Goodreads Community Manager has now responded in part:

“To clarify our policies, in general, magazines are not allowed, as Goodreads is designed to be a database for books. As we state in our Librarian Manual, periodicals should be deleted unless they have an ISBN or ASIN, or are bound in a way that makes them substantially similar to a book (e.g., perfectbound). It has long been standard procedure for our volunteer librarians and staff to apply these rules to all periodicals; over the years, countless periodicals without ISBNs or ASINs have been removed, of all types and genres. In this particular case, it looks like the volunteer superlibrarian was simply following our rules and had also removed other periodicals around the same time.

We agree that the type of binding should not be the deciding factor on if these publications are allowed on Goodreads; rather, it is their content and format that matter. We are discussing our policies around periodicals internally; a decision either way would have large implications, technical and otherwise, so we don’t have a timeline on when we will share more here, but we want you to know that we are listening and continuing the conversation with our team.

We also appreciate the concerns you have raised about the impact of our policy and the impact of its enforcement. While our goal has been to establish site-wide policies that benefit the community as a whole and make all readers feel welcome, we are also committed to ensuring that our impact matches our intentions. We are always open to our members’ feedback, and we are closely monitoring the discussion around this issue to see where we can improve.”

“We’re listening” and an acknowledgment that the standards for inclusion of magazines needs to be reconsidered is better than nothing. However, the nebulous timeline does not help Anathema Magazine, nor FIYAH, nor their readers right now. Goodreads, according to its own website, is “the world’s largest site for readers and book recommendations.” It’s an important place where magazines like FIYAH and Anathema can try to reach readers (some of whom may be underserved) and get the stories of their marginalized writers seen—and for the time being, they’ve been shut out completely.

“With that said, some participants in this thread have come close to violating the group rules, and we will not tolerate any name calling, personal attacks, or spurious accusations against other members, whether they are librarians or not. Any members that continue to post this sort of content will be removed from the group. Librarians are volunteers and we are grateful for their work on our database and their commitment to Goodreads. Goodreads and the Feedback Group are welcome to all opinions, and we will take appropriate actions to protect our members.”

If you’re a fish swimming around in polluted water, metaphorically speaking, another fish pointing out “Hey, I think the water is kind of dirty,” is not a personal attack. Issues of structural racism need to be addressed honestly, not defensively. Selective, arbitrary enforcement of rules—which happen to be pretty arbitrary of themselves—while not necessarily individually malicious, has a profound effect on the people least able to defend themselves.

And it’s worth asking who those rules privilege in the first place—why does the purchase of an ISBN or the presence of an ASIN magically confer literary worthiness of a magazine to exist on Goodreads? Goodreads, it should be noted, has been owned by Amazon since 2013. And if a periodical doesn’t have either an ISBN or an ASIN, it definitely isn’t being sold on Amazon.

It may seem strange in this age of Amazon’s market dominance that there’s anything that site doesn’t sell. But there are structural reasons for creators to sell independently, which often affect marginalized communities more. I asked the FIYAH team about their reasons and they said:

“We wanted to keep the price point low and accessible to our readership. As a fledgling magazine we didn’t have the space to only charge $3.99 for the magazine, pay contributors fairly, and pay amazon’s third party fees.”

Here’s hoping Goodreads is listening and will do better, considering its major role in the ecosystem of readers. If you can handle a headache by proxy, again I urge you to read Brian J. White’s entire incredible Twitter thread, which starts here. He’s got quite a few screenshots of the discussion, and according to him, some responses are starting to be deleted.

In the meantime, if you want to help out, here’s a few things you can do: