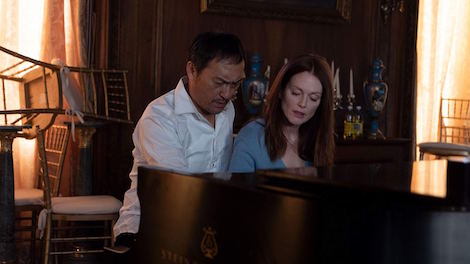 Bel Canto won both the Orange Prize in Fiction and the Pen/Faulkner Award for Fiction. I first read it in a creative writing class, where we discussed Patchett’s use of the omniscient narrator, so rarely used in modern novels though quite common in older ones. Because of this, Bel Canto has the feel of an older novel, while being very modern in its subject matter. Bel Canto loosely tells the story of the Japanese embassy hostage crisis in Lima, Peru in 1996-1997. The novel revolves around opera singer Roxane Cross,  Japanese businessman and opera lover Katsumi Hosokawa, his translator Gen, and their dealings with the terrorists who take them hostage. It appears that Gen will play less of a role in the film, judging by the trailer, but despite some other changes I noticed, the trailer looks promising. Julianne Moore and Ken Watanabe are perfect casting choices.

Bel Canto was previously adapted as an opera. Has anyone seen it? I would love to go to a performance.

If you’ve yet to read an Ann Patchett novel, Bel Canto makes a great starting place.