But…It’s not back yet. We still have a few months to wait until Doctor Who returns to our TVs. Ever since the announcement of Jodie Whittaker as The 13th Doctor, there has been so much energy and anticipation. And the enthusiasm of new fans…It’s been amazing! The most exciting part, as a long-time Whovian, there has been renewed interest from my…less fanatic friends.

The most common question: Do I need to catch up on previous episodes before watching Jodie’s Doctor?

Aw, hunny. There are 50+ years of episodes to ‘catch-up’ on. I have a much better way to welcome you and Jodie to the fold. Make yourself a cup of tea, grab some jelly babies, and pull-up these brilliant books: 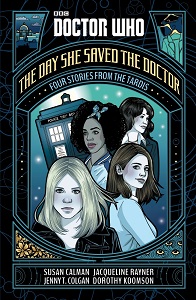 The Day She Saved the Doctor: Four Stories from the TARDIS written by Susan Calman, Jacqueline Rayner, Jenny T. Colgan, and Dorothy Koomson

This is the book you start with to celebrate our first female Doctor. It is perfect for this exact situation. The Day She Saved The Doctor is an anthology of four short stories, written by female authors about female companions and released on International Women’s Day earlier this year. It should be on every Doctor Who reading list, for new-vians and Whovians alike.

The four companions are Sarah-Jane, Rose, Clara, and Bill. Each of them captures the spirit of Doctor Who as a series: Sarah-Jane faces her greatest fear; Rose is caught up in romantic ideals; Clara struggles with the ‘cleverness’ of a situation; Bill strengthens the very personal bond between The Doctor and his companions. These are the four common elements of Doctor Who: Fear, escapism, smarts, and personality. Bring it all together with an adventure and you will understand why this series has been so popular for so very, very, long.

I know we have had plenty of male companions but there is something special about these stories. As Jodie said at the SDCC Panel, there’s a different way people speak to females. With the introduction of a female Doctor, we are going to see some shared experiences between The Doctor and the companions. There is a taste of this in the book where each of them has a moment of recognition for being female, followed by a moment of strength and character unique to them. It is the combination of these elements which saves The Doctor and brings out the best story-telling.

If there is one book to read before Jodie takes to the TARDIS, this is the book.

However, you’re here at Book Riot. And none of us can ever stop at one book… 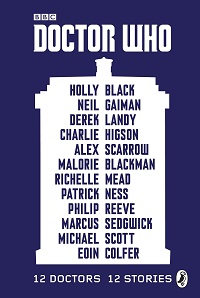 That’s a long list of contributing writers. They are all on the front cover of the book and they ALL deserve the recognition. It was originally published as a series of ebooks, but holding all of them together in one bound volume makes it far easier to dive into and enjoy. Many of the authors’ names you will recognise from their own books; don’t think this gives you an insight into the storylines. Instead, recognise this as a waltz through the timeline of The Doctor. Starting with The First, each story gives a glimpse of The Doctor’s personality and outlook on life (or…lives). As you regenerate from each story, it becomes clear how The Doctor is one entity with several outlets of expression. Each Doctor has their own personality, quirks, mannerisms, and relationships. Individual writers allow individual expression. However, the caliber of writers encourages the continuity that binds all Whovians together.

For new Doctor Who fans looking for a little insight into the history (without losing three weeks of their lives in a binge-fest), 12 Doctors 12 Stories is a great taster. After reading this, you may have a fair idea of your favourite Doctor. Or not. Maybe not. I’m still working on my Final Three. 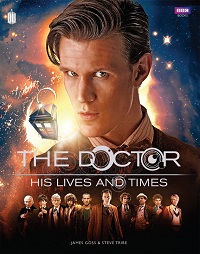 The Doctor: His Lives and Times written by James Goss and Steve Tribe

This is one of those ‘collection’ books, with a whole bunch of facts and quirks you would think would only be necessary for a Doctor Who Trivia Night. And while there are many of these books around, this one is my favourite because of the special comments and contributions from the production groups. Unfortunately, it only goes as far as Matt Smith (11th Doctor). If you know of a more recent edition, please share it in the comments, but until then, this is my precious. It has everything! Facts behind the props, stories behind the stories, anecdotes about the people behind the show. There are quotes from Verity Lambert, Carole Ann Ford, and William Hartnell. There are insights from Tom Baker, Christopher Eccleston, and Georgia Moffett. I love this book.

If you are watching Doctor Who with any Whovians, bring this book along. It will definitely help you keep up with any “in-jokes”. 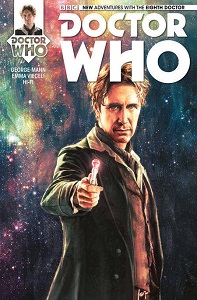 There are too many sub-series and writers to include on this, so my advice to you is to head to your local comic book store and ask for the latest Doctor Who comic. Even if you only pick up one single issue, it will give you a taste of the frenetic energy from the series!

The Doctor Who comics also give ample opportunity to visit some characters who really didn’t have enough screen time (I’m looking at you, sexy 8th Doctor). The tv series is amazing and will always be cherished, but the comics have expanded on so many teasers. The little moments where you go “I wonder what happened to…”

We still have to wait until October 2018 for the new Doctor Who series, so let’s make the most of it. The Doctor would definitely approve of some light reading until she arrives (after all, The Doctor IS a literary hero). And if you make it through these suggestions, fellow Rioter Dana Lee has a few sci-fi suggestions in the same vein. It will be October before you know it…And you didn’t even need a TARDIS.