I have a tumultuous, reading relationship with Ms. Woolf, or V. Dubs as my college friends and I unceremoniously dubbed her while studying abroad in Bath, England. I signed up for a Virginia Woolf class envisioning that I would open my mind to an author who pioneered experimental writing, stream of consciousness, and feminist essays. The study trip to Monk’s House (Woolf’s house and gardens) also wooed me.

On the first day of class, our smartly-dressed professor walked into the room and announced that, in order to honor the work of Virginia Woolf, he planned to teach each class in an unconventional way. He began by making statements, we tried to come up with questions and ideas, and, eventually, we ended at the main idea for each lesson. I tried to write my notes backwards—starting at the bottom of the page and working my way up. It was a failure, as were my papers and class comments. The rest of the class reveled in writing papers peppered with anagrams, poems, and feminist rants. I embarrassingly longed for some structure and a bit of linear thinking.

Our assigned readings were not much better. I enjoyed the accessible Mrs. Dalloway and Orlando, but balked when we started reading the more experimental The Waves and To the Lighthouse. While reading those, I pictured V. Dubs looking over my shoulder and maniacally thinking: “I know who is in the scene and she does not. I’m choosing not to let her make a mental picture. Only I know what goes on here.”

When it came time to return to the States, I sold back the books from my other classes, but decided to keep all of my Virginia Woolf books. I hoped that one day I would be free enough (tipsy enough?) to decipher and appreciate more of Woolf’s oeuvre.

reading The Waves with my beach chair in the waves 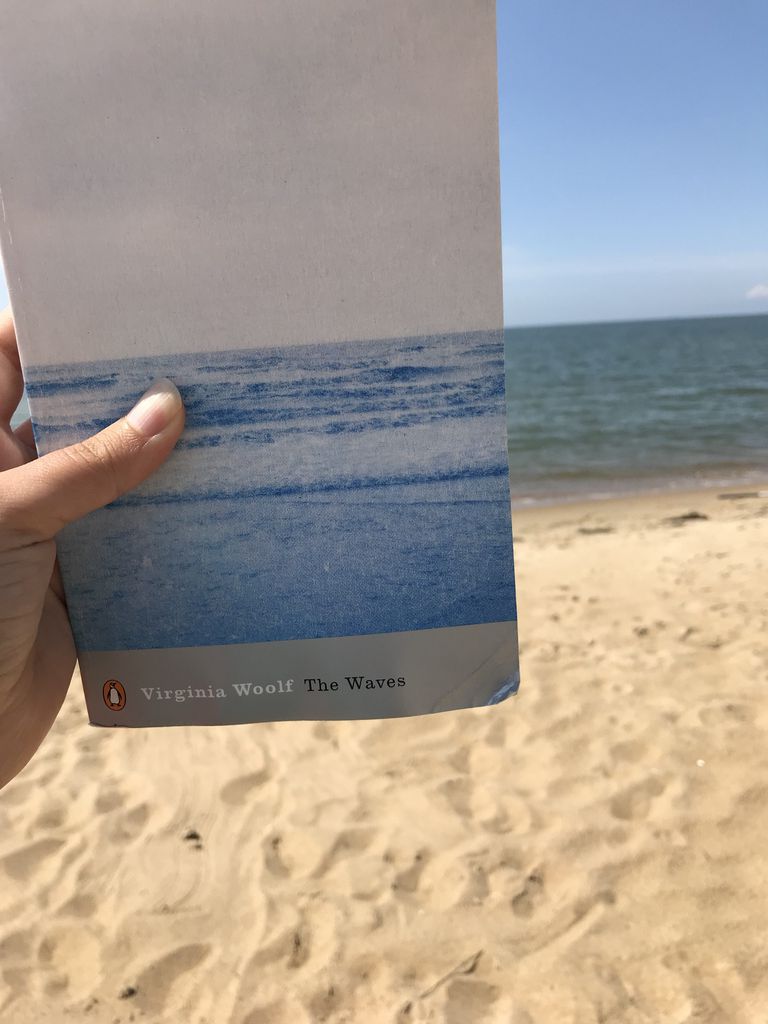 This summer, my husband and I shipped our son off to his Grandma’s house for a week of camp with his cousins. While he was away, my husband and I snuck off to the beach together. No children equals lots of beach reading. I packed five books and plucked The Waves off of my bedside table, where it had been buried in my to-be-read pile.

Once at the beach, we set up our daily camp: umbrella up, beach chairs on the edge of the surf, and a cooler loaded with IPAs and Strongbow Cider on hand. After plowing through David Sedaris’s new book Calypso, I gingerly decided to try The Waves.

I began with The Introduction and raised my beer to the first sentence, “The Waves presents a challenge to the reader. It is an exploration of the workings of the minds of the six named characters within the text: Bernard, Rhoda, Jinny, Louis, Neville, and Susan.” After reading this, I felt better. Others find this book challenging!

With my feet in the water and the sound of waves crashing and rolling around me, I started reading. An amazing thing happened. I stopped thinking so hard about the text and let it wash over me like the waves. The characters and the settings became clear in my mind. I found myself emotionally thinking of my own childhood and making connections to cherished books.

While exploring the garden, Bernard says, “Let us inhabit the underworld. Let us take possession of our secret territory, which is lit by pendant currents like candelabra.” I thought of Jesse and Lesley crossing the downed tree to enter Teribithia and how my childhood neighbor and I created our own secret kingdom behind my tool shed.

Later on, the characters are leaving for boarding school and Louis says, “He is composed, he is easy. He swings his bag as he walks. I will follow Bernard, because he is not afraid.” I thought of my own first days in at my all-girls high school, trying to emulate the girls who seemed the most confident, to mask my own awkwardness and fear of starting something new.

Neville looks to the sky and says,”The clouds lose tufts of whiteness as the breeze dishevels them. If that blue could stay for ever; if that hole could remain for ever; if this moment could stay for ever.” I read that line and felt the same way, I wanted this moment to stay forever. I felt I owed Virginia Woolf an apology. Her books are beautiful!

Those days on beach, with my feet in the water and sound of the waves the only sound I could hear, I felt Virginia Woolf “opening in my eyes a thousand eyes of curiosity.”

Want some more suggestions for unconventional, serious beach reads? Peruse this post about reading Bleak House and other classics on the beach!