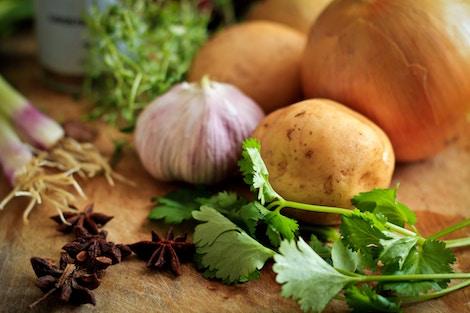 Last year, in a bid to finally kick my cheese habit, I started buying, browsing, and borrowing vegan cookbooks. Food is all about habit, and as I didn’t grow up with the habit of eating vegan food, most of my comfort meals and fallback recipes involve eggs, cheese, or milk.

After a lot of research and disasters, these are the vegan cookbooks that have steered me through nearly every temptation. 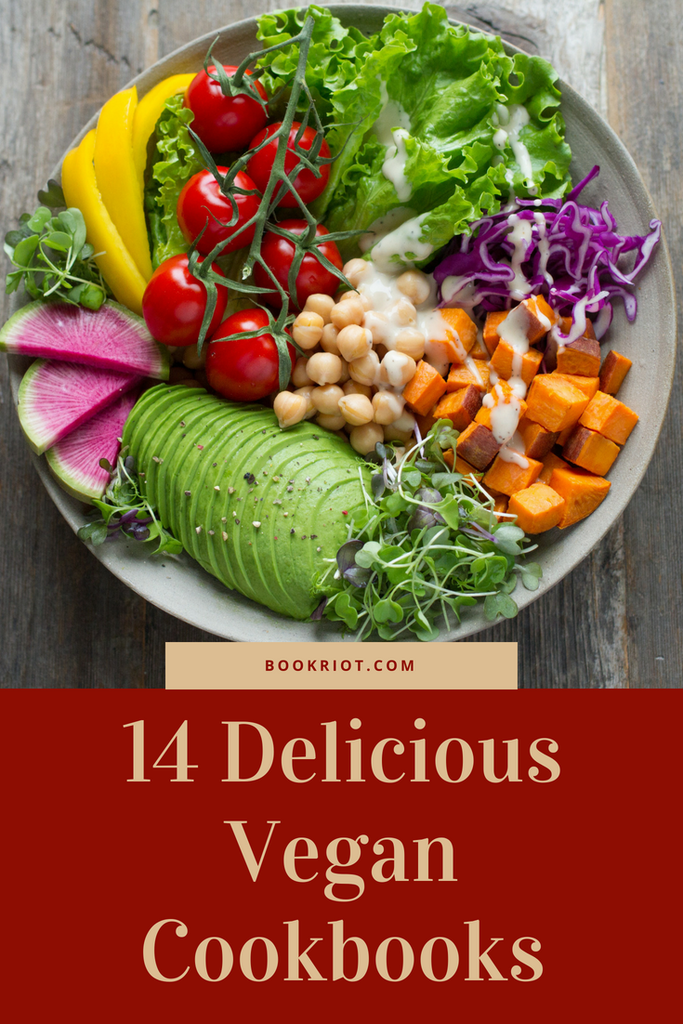 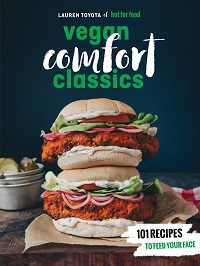 Received wisdom is that a cook approaching a new kind of cuisine should start with the basics. What is a spoon? How many grams in a bathtub? Is it possible to use olive oil as personal lubricant? But let’s be real: the first true test of your veganism is going to be a long day and a near-empty fridge. Which is why the best thing any new vegan can do is pick up a copy of Vegan Comfort Classics: 101 Recipes to Feed Your Face.

Category ID: 13193
Category ID: 4284
Category ID: 479
True Story Newsletter
Sign up for True Story to receive nonfiction news, new releases, and must-read forthcoming titles.
Thank you for signing up! Keep an eye on your inbox.
By signing up you agree to our terms of use 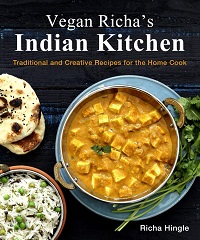 One word for you vegans reading this: dal. Two words: more dal. The fact that Vegan Richa’s Indian Kitchen has an entire chapter just for dal was more than enough reason for me to buy this book. Then I tried her recipes for Kathi Rolls and Whole Roasted Cauliflower-Gobi Musallam and my life changed for the better. Richa also includes gluten-free versions of all 150+ recipes and 40% of the books profits are donated to animal rights charities in India.

vegan in 7 by rita serano 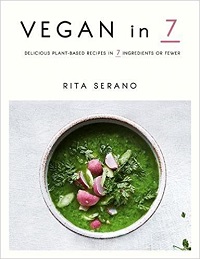 Saviour of students, overworked parents and the chronically uninspired everywhere: Rita Serano’s Vegan in 7 has a devoted following and was picked by Vogue as one of their best vegan cookbooks. So if you’re looking to feel vaguely chic while cooking easy food, this is the book for you. Every recipe is composed of seven or less ingredients and, at the time of writing, they’re impossible to mess up. 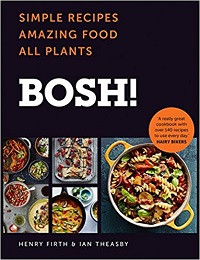 As a Brit I am genetically disposed to appreciate anything that uses the word “Bosh”. Unfortunately I’m also honour-bound to roll my eyes at Henry Firth and Ian Theasby’s adopted title of “food remixers”. Which means that I was in neutral mode when I discovered the multi-media, plant-based BOSH! community, watched all their videos and started coveting BOSH! Simple Recipes, Amazing Food, All Plants.

The Chickpea Revolution Cookbook by heather lawless and jen mulqueen 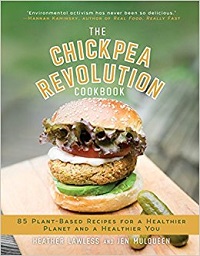 The Chickpea Revolution Cookbook is for those weekends when you’ve got a powerful desire to save the world, get healthy, and use up all those half-empty bottles of relish and chutney. I know it sounds (and is) a little crunchy but despite promising the reader “a high-five from nature,” these 85 recipes form Heather Lawless and Jen Mulqueen are easy, delicious, and worth taking seriously.

The Vegan Cookbook by jared bangerter 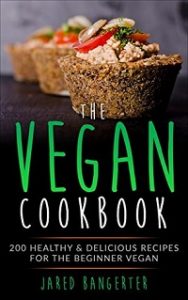 Most vegan cookbooks make a bit of an effort to go into the nutrition behind veganism. In The Vegan Cookbook, however, Jared Bangerter manages to give a detailed breakdown of how vegans can ensure they have a healthy, nutritious diet, without boring prospective cooks to tears. Despite an over-reliance on the dreaded d-words (‘diet’ and ‘detox’), Bangerter’s recipes are easy to follow and usually delicious. Check out the Molten Hot Fava Spread but steer clear of the Vegan Crepes. 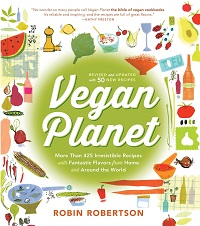 Every kitchen needs a battered beast of a cookbook that covers everything from how to peel an onion to how to plate a dinner for ten. Enter stage-right, Vegan Planet: 425 Irresistible Recipes With Fantastic Flavors from Home and Around the World by Robin Robertson. Robertson has written over 20 cookbooks and this is the most comprehensive to date. You can try a few sample recipes here. 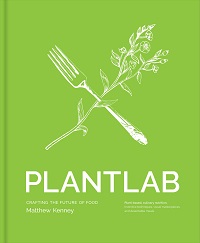 Matthew Kenney is a vegan cook who has pioneered new techniques in raw cooking (an oxymoron that I imagine it would take another book to unpack). The 100+ recipes in Plantlab take you from the basics to “professional” level cooking with results so pretty you’ll be physically incapable of taking a bite without first staging a photo shoot. I’m not exaggerating, this was the book that convinced me to put flowers on pizza (and I have never felt more alive). 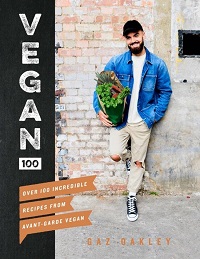 Another lad with a fondness for tempeh and a disdain for dairy, Gaz Oakley is all about flavour (praise be, there’s more than enough recipes for unseasoned nut roast out there). Vegan 100 includes recipes for big flavoured comfort food that vegan food normally struggles to do well. Fish and chips, cheesecake, meat balls and a purple soup so vibrant I don’t know whether to put it in a bowl or on my nails.

This Cheese is Nuts! by Julie Piatt 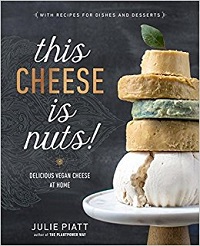 This Cheese Is Nuts! is a great title and any pun-lover would be proud to have this on their kitchen shelves. Actually making “cheese” from nuts always involved too much straining and soaking and sieving to be worth the effort. Or so I thought. Turns out that making your own cheese is a massive faff but Julie Piatt’s recipe for Smoked Almond Cheddar is worth devastating your kitchen over. 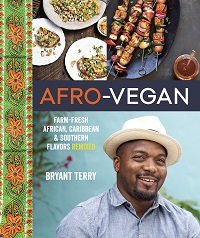 I am so torn over Afro-Vegan. On the one hand, it’s amazing. Each recipe is mouthwatering (none of those insipid filler soups) and comes with a musical playlist. One the other hand, these recipes are elaborate. It turns out that anyone can make and serve up an Afro-American fusion feast, as long as you have time for two days straight prep and three days to cook. Inspiring and daunting. 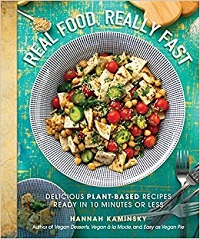 I was sold on Real Food, Really Fast as soon as I spotted a recipe for White Chocolate Peanut Butter in the content table, but it turns out that Hannah Kaminsky’s savoury dishes are the true stars. Pizza Waffles, Exploding Wonton Soup, Tofu Shakshuka and Tamale Pot Pies might not sound like the kind of thing you can “quickly whip up”, but it turns out miracles are real and dreams do come true. 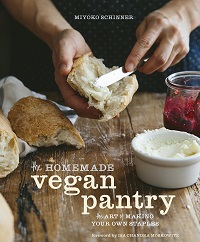 The idea that veganism is somehow healthier and better for the planet is pretty seductive and sadly inaccurate. The majority of shop brought vegan food comes with just as many preservatives as meat, and it’s usually wrapped in a ton of plastic. Thankfully, help is available from The Homemade Vegan Pantry, a cookbook full of recipes for how to make the basics, including all those plastic-fantastic meat substitutes. 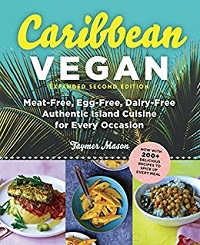 Taymer Mason is a dream instructor. Her recipes in Caribbean Vegan are fun, easy, and range from traditional Caribbean fare (cassava pancakes, pelau and Trinidadian doubles) to the contemporary (papaya chia smoothie bowl, plantain Wellington and Caribbean sushi). It’s also full of tips for how to do things like chop breadfruit (turns out that my ancient bread knife was not the answer) and making your own pasta.