Instead of reading in the evenings, I have been watching season two of Riverdale on Netflix. It is exactly the Dark Shadows–meets–Beverly Hills, 90210 show that I need, and while there is (so far) no paranormal activity, the show very much feels like there could be at any moment. 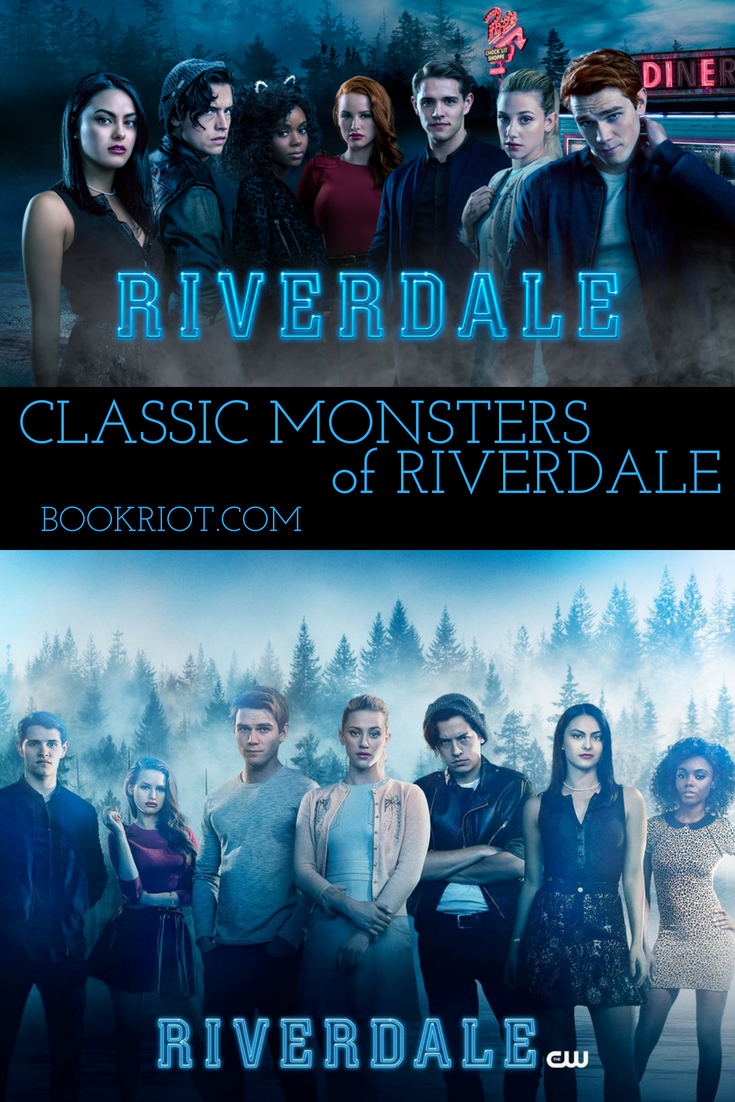 The show uses film noir techniques, including dutch angles and heavy filters, combined with horror movie tropes to evoke a very specific feeling that lends itself easily to the paranormal. Everything that happens feels high-stakes thanks to a combination of these visual techniques, interpersonal drama, and heightened emotions. Plus the episodes are all named after movies—mostly horror movies.

I think we can all agree that the most productive use of our time is to debate what type of classic monsters the characters would be. Here’s my take.

Riverdale’s creepiest family, with their ancestral manse on the hill and family “curse,” are obviously werewolves.

Riverdale’s mafiosa are undoubtedly vampires. And given half the chance, they will suck Riverdale dry.

This gang of mostly unwanted criminals with their serpentine symbols and rituals are surely swamp creatures.

Riverdale’s wannabe do-gooders are robots or hybrid monsters of some kind. There is no other way to explain their strange combination of bright-eyed innocence and bad decision-making. They’re running a faulty algorithm.

How do you solve a problem like the Coopers? Don’t worry, they’re already on the job, because they are mad scientists.

Josie and the Pussycats

Josie McCoy, her mother, and the other Pussycats are surely witches, and they’ve cast a spell on all of our hearts.

The supernatural is coming to Netflix in the form of The Chilling Adventures of Sabrina (aka Sabrina the Teenage Witch), based on the comics from Archie Comics. No release date has been announced, but I am eagerly awaiting the announcement. As I understand it, Sabrina and Archie take place in the same universe, so my theories about Riverdale aren’t so far-fetched. Well. They’re pretty far-fetched, but not impossible.

A fresh version of Scooby-Doo from 2010, this is eminently re-watchable and a ton of fun.

This pastiche show from 2014 combined several classic monsters and archetypes and brought the drama.

This show. Oh man. If you haven’t seen it, I don’t know what to tell you. It’s about brothers, and they hunt demons, and it is ~*drama*~ to the max.

While this 1999 show suffered from the same problems all of Whedon’s shows suffer from, it also employed some killer film noir and horror techniques, like Riverdale.

This very adult, very murdery 2013 show matches Riverdale in tone and in look, but as my husband said, comparing the writing would be like comparing Twilight to Sadie.

Check out this list of the books mentioned in season one of Riverdale, plus this deep-dive into Betty Cooper’s love for Toni Morrison, both from Connie Pan.

In the comics, Jughead is canonically asexual and aromantic, unlike the show with its Bughead ship. Eileen Gonzales wrote about the aro/ace representation in the comic and the erasure in the series.

Riverdale writer Britta Lundin’s novel Ship It is about fandom and comes highly recommended by my fellow Rioters.

Riverdale star KJ Apa will costar in The Hate U Give, also a page-to-screen adaptation.

Jamie Canaves recommends a comic for fans of Riverdale.