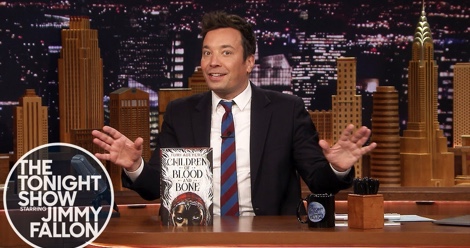 Fans voted to choose Children of Blood and Bone as the first pick for Jimmy Fallon’s Tonight Show Summer Read!

Last week, Jimmy Fallon announced that he was lacking a good summer read, so he decided he’d pull an Oprah and have his own book club. He chose five books, IQ by Joe Ide, Providence by Caroline Kepnes, The Good Son by You-Jeong Jeong, The Immortalists by Chloe Benjamin, and Children of Blood and Bone by Tomi Adeyemi.

Fallon said that he did his research: he read the inner flap and judged the cover. He described them to his audience, tested how they looked under his arm, and then asked his audience to vote.

Fallon compared Adeyemi to a J.K. Rowling and George R.R. Martin and called it a “young adult Game of Thrones-y kind of jam.”

Voting closed Thursday after over 140,000 votes, and the winner was announced on Friday night’s show. Children of Blood and Bone won with 47% of the votes.

Category ID: 470
Category ID: 468
What’s Up in YA? Newsletter
Sign up for What's Up In YA? to receive all things young adult literature.
Thank you for signing up! Keep an eye on your inbox.
By signing up you agree to our terms of use

Fallon will give updates on his process through the summer. Readers are encouraged to use the hashtag #tonightshowsummerreads to participate in the discussion. Macmillon and the Tonight Show will be donating 3000 copies of Children of Blood and Bone through the organization First Book.