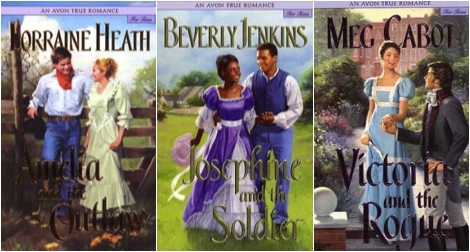 Back in 2002/’03, Avon introduced a series of novels called Avon True Romance, intended to being Avon romances to new, younger audiences. Basically, it was a line of sweet but still slightly steamy romances targeted at those of us who had been surreptitiously (or less surreptitiously) stealing romance novels from our mothers for years. Avon brought in some amazing authors to write for this line—Beverly Jenkins, Lorraine Heath, Meg Cabot, etc.—kept the novels shorter and the locales romantic, dressed each book up with a truly gorgeous cover, and marketed them to their new pre-teen/teen audience.

Unfortunately, the line was short-lived and ultimately produced only 12 novels. Though a number of the Avon True Romance novels have been re-released as ebooks over the years, most are out-of-print, and the series itself seems to have faded from the collective Romancelandia memory.

But even though the line is dead, I say long live Avon True Romance! There may have only been 12 novels, but they made for a lot of happy readers. 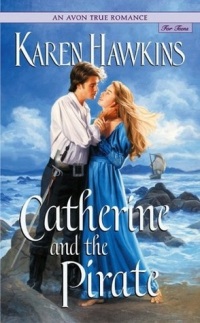 Catherine and the Pirate by Karen Hawkins

What is a line of dramatic, teen-targeted romances without a pirate? Nothing, I tell you! (Particularly for someone whose first romance was Gentle Rogue…) Privileged Catherine Markham comes from a wealthy Boston family and is bored to tears by her stifled upbringing. When her brother is kidnapped, she tries to recruit occasional-pirate Derrick St. John to help her ransom him back. Catherine and the Pirate is not currently available as an ebook, unfortunately. Hawkins had suggested that she would be revising and re-releasing it as a self-published adult romance, but it doesn’t look like that ever came about. But you can still find it used! 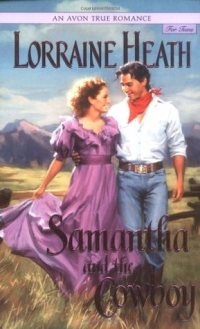 Samantha and the Cowboy by Lorraine Heath

Straight from Lorraine Heath’s western days, the next two books shift us from the East Coast to the Old West. In order to save her family’s farm, Samantha dresses herself as a boy and signs on to a cattle drive. The money it pays will be just enough to dig them out of debt. Too bad she runs into brooding cowboy and ex-soldier Matthew Hart, who sees through her disguise and is furious that Samantha has tangled him up in her mess. A heroine in disguise, a grumpy hero, and a road trip (sort of)? You know you want to read it. Thankfully you can get it as an ebook! 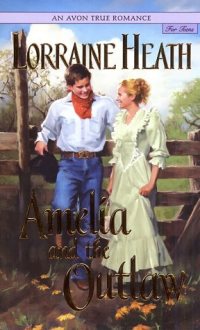 Amelia and the Outlaw by Lorraine Heath

Amelia Harper is tired of being smothered by the protective behavior of her father (a judge) and her two older brothers, and eager for love and adventure. Jesse just wants to keep his head down, his nose clean, and avoid ending up in jail…again. The last thing he needs is for Judge Harper’s—the very judge who give him his second chance—excitable daughter to come crashing down on his lap. Amelia and the Outlaw is out-of-print like the other True Romance titles but can be purchased as an ebook. 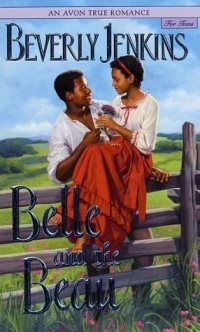 Belle and the Beau by beverly jenkins

Belle Palmer and Daniel Best come from very different worlds. Raised in the north in a free family, Daniel is educated and confident, with a bright future before him. Belle has only recently escaped from slavery in the south, and she’s free for the first time in her life. The Bests take Belle in while she finds her feet, and as she blossoms before his eyes, is it any wonder Daniel finds himself falling in love? Or that Belle should love him back? Too bad he’s already engaged. Belle and the Beau has been re-released as Belle and is available as an ebook and a paperback. 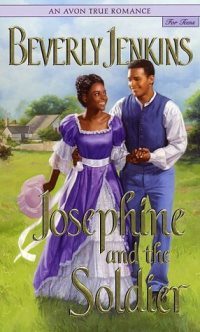 Josephine and the Soldier by Beverley Jenkins

Josephine Best is a girl with goals. She’s educated, and the owner of her own hairdressing shop! The last thing she has time for, or is the least bit interested in, is courting. Adam Morgan has come home from the war and is eager to return to his life as a practiced flirt. He used to call Josephine “Pest” when there were children, but now his Pest is all grown up and being pursued by another soldier. Jojo assumes Adam is the same old flirt. Adam is reluctant to interfere in her current relationship and risk hurting her. But they just can’t stop thinking about each other. Josephine and the Soldier has been re-released as Josephine and can be purchased as an ebook or in print. 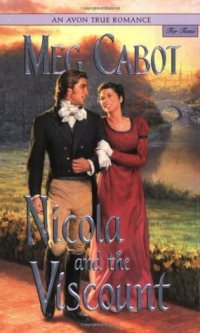 Nicola and the Viscount by Meg Cabot

I love regency romance novels. Loooove them. And I think that is due as much to Nicola and the Viscount as it is to copious viewings of the 1995 Pride and Prejudice. Nicola Sparks is your familiar “couldn’t stay out of trouble if you locked her in a box” regency heroine. She catches the eye of her dream man, Lord Sebastian Bartholomew—not bad for her first season—but Nathaniel Sheridan seems determined to throw a spanner in the works. He keeps insisting her new fiancé is a villain, but he has to be wrong. Doesn’t he? Meg Cabot re-released Nicola and the Viscount with HarperTeen and though the physical version has gone out of print again, you can still pick it up as an ebook. 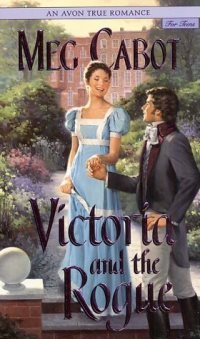 Victoria and the Rogue by Meg Cabot

Victoria is used to fending for herself. She grew up in India and is not terribly excited to find herself being shipped off to England to find a husband. But darn it, she’s Lady Victoria Arbuthnot! She actually manages to get herself engaged on the ship on the way back to England. Which is the height of impressive, really. Girl’s got game. Too bad the captain of her ship, Jacob Carstairs, is determined to meddle. Too bad also that he’s so annoyingly attractive. Like Cabot’s other Avon True Romance, Victoria and the Rogue was also re-released with Harper teen and is still available both as an ebook and in print. 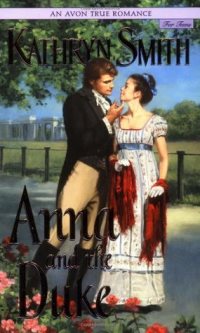 Anna and the Duke by Kathryn Smith

This was my first ever Avon True Romance. It’s also the book that introduced 13-year-old me to Lord Byron and whoooooooo boy did that become like a whole thing. A whole thing. But really, this book is just the sweetest. Anna is a poetry devotee with an obnoxiously overbearing mother who is determined that nothing will stop Anna from marrying her fiancé Richard, the eldest son of a duke. But when the duke dies and a surprise son, Ewan, appears from Scotland to (reluctantly) claim his English father’s title, Anna finds herself engaged to the second son and in danger of falling in love with the new Duke.  Sadly, Anna and the Duke is one of the few novels on this list that is only available used, as it has not been returned to print. 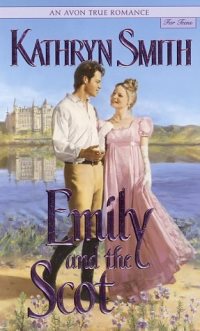 Emily and the Scot by Kathryn Smith

The sequel to Anna and the Duke stars Ewan’s half-sister Emily, who has had enough of scandal after everything that happened following her father’s death. So she makes a run for it—“it” being the Scottish border. Ewan’s told her all about his beautiful homeland and now Emily is out to see it for herself. She makes her way to Ewan’s estate and ends up in a war of wits with his cousin Jamie, who doesn’t think very highly of English Emily and her sharp tongue. You can see where this is going, right? Emily and the Scot has been allowed to fall completely out of print, but you can still find used copies of it floating about. 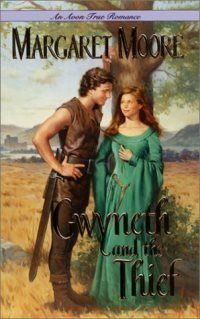 Gwyneth and the Thief by Margaret Moore

This was one of the other Avon True Romance novels that I actually managed to get my hands on. Just look at that cover. Doesn’t it give you Robin Hood vibes? Lady Gwyneth’s father is ill, her estate is in danger, and her hand in marriage is about to be claimed by her loathsome neighbor. She needs backup, and that’s where Gavin comes in. A thief by trade, left for dead and rescued by Gwyneth, he has little choice but to let her dress him up as a squire and and put him in charge of Haverleigh’s crumbling defenses. I am so sad to report that Gwyneth and the Thief has not been re-released, because this book is quite entertaining. But you can still get used copies! 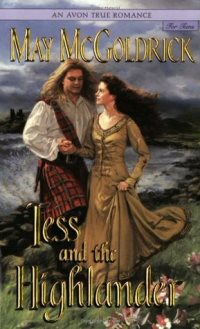 Tess and the Highlander by May McGoldrick

It’s 1543, and Tess Lindsay lives alone on the Isle of May after the deaths of her guardians, until the day a massive storm blows someone ashore. Enter Colin “A girl in every port” MacPherson. But the girl that saved him from that windswept shore is entirely unlike anyone he’s ever met. Smitten, he begins trying to earn her trust as together they unravel the clues about Tess’s mysterious past. I haven’t read Tess and the Highlander yet, but it’s $0.99 on Amazon (at the time of my writing this post) so get thee to the one-click button! I know I did! You can also purchase a self-published paperback from when McGoldrick re-released the novel in 2016.

Regarding Miranda and the Warrior: If you’ve been counting you might have noticed that there are only 11 titles on this list. The Avon True Romance line did produce 12 titles, as I mentioned at the beginning, and in the first draft of this post I included the twelfth, Miranda and the Warrior by Elaine Barbieri. Then I came back and edited it out. Native America romance novels, the kind that feature racist stereotypes and the eroticizing of Native American leads, are a disgraceful part of the romance genre’s history, and we can’t change that. But I can choose not to include one in my post, even if that means my list is incomplete.