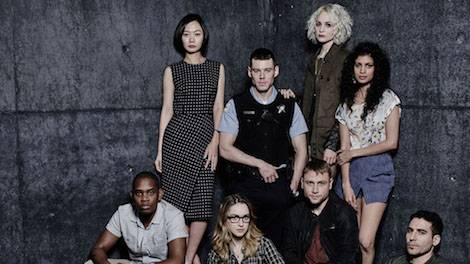 “Does any anyone need an extra ticket?” asked a man outside of Chicago’s Music Box theater. He was slight, handsome, unassuming. He had snuck outside onto the patio from the bar where the VIP party gurgled away. The Music Box is Chicago’s art theater, and like many other parts of Chicago is a funny combination of shabby and bourgie.

“Yes,” I responded in that enthusiastic, overbearing way I sometimes do. He smiled and told me he was one of the show’s composers. He handed slightly damp ticket from his pocket and asked for a hug. I am not a hugger, I often bristle and freeze up when asked for one, yet I hugged him without thinking.

The ticket was for the premiere of the series finale of Sense8, which had sold out long before I had heard about it. But as a fan of the show, I figure I would take the L down to the lobby with a book, and hope for a chance at a spare seat. Due to this stranger, I got one.

This act of kindness was just a single frame on the film roll of tiny miracles that not only made Sense8 the cult hit it is, but was also the thing that helped save it.

Sense8 is a Netflix series that follows the lives of eight people who are linked to each other telepathically. Each person comes from a different part of the world, and while their connection isn’t a choice, the way they empathize and care about each other feels like a conscious decision that they each cultivate. Each of the eight is connected to the other seven in a tiny, supportive, tight telepathic community.

It seems improbable. How does Lito, a Gay Mexican movie star, connect to Will, a blue-collar Chicago cop? How does Cepheus, a Kenyan bus driver, empathize with San, the mistreated daughter of a Korean business tycoon? Or a Berlin Gangster named Wolfgang fall in love with Kala, a pharmaceutical scientist from Mumbai? And how does an Icelandic house Musician known as Riley Blue make her way through her trauma to relate to Nomi, a Transgender computer hacker from San Francisco?

In a 2018 world where school shootings blur into refugee crises, then bleed into women crying for justice and seep into kneeling football players who are sneered at for risking it all, it’s hard to imagine tearing down all the signifiers that define us. As I walked into the season finale, I knew that the series was capable of the impossible. Sense8 doesn’t just ask us to rip open our identities, it insists on it. It is a show that demands its audience fall in love and identify with each of the main characters, even if they seem like they are nothing like us at all. In the process, we even, perhaps, fall a little bit more in love with ourselves. It is cathartic, a work of art that reminds us that we are not an us or a them but a we.

Netflix did not renew Sense8 for season 3. Outraged fans from across the globe took to their phones and their keyboards in protest. They wrote letters, canceled their subscriptions, trolled the promotions for other shows, and plastered their call to action on every social media platform. Even a fellow Rioter posted a list of books to cheer us up following the show’s cancellation.

I, too, joined in with a few polls and hashtags. I watched the whole thing play out from fan pages as a month of aggressive, well-organized protesting persisted. I was hopefully pessimistic; I wondered how much of a difference our protest could make. Even though I am not one of the LBGTQ fans, who clung to Sense8 from places across the planet where being out was a social or physical death sentence. I felt I had to do something, Because in the spring of 2017, Sense8 served as one of my lifelines to a world bigger than my own. At the time I lived in a converted garage with a view of Lake Michigan in a conservative town in Wisconsin. It was hard to find a safe place to be an artist, a single woman, or an ally to anything that might even for a moment stand outside the conservative, often fearful rhetoric of the town. Sense8’s characters were often defiantly themselves in a way that I longed to see walking down the street.

Our protest did do something.

In a letter a month after it was canceled, the show’s creator Lana Wachowski wrote in a letter to fans: “Improbably, unforeseeably, your love has brought Sense8 back to life, I could kiss every one of you!” Sense8 was renewed for a two-hour special.

“I believe in love,” Lana said tearfully on stage at the premiere, her now-famous brightly colored dreads dancing with each word. I joined the crowd in cheers that seemed to shake the old theater’s rafters. The existence of the premier was a happy ending in a time a time where happy endings have seemed rare. Listening to an impassioned audience of cast, crew, and fans laugh and gasp as if we too were connected like the cluster of characters felt more fairytale than I would have imagined last June.

Now that that the hype and joy of the series finale have slowed down and the high of it all has worn off, it’s time to get back to the grind of the world. Still, like any other beloved book or TV series, we all try to find ways to ease the goodbye on a little longer. So here are a few books that not only have the same spirit as Sense8, but I can easily imagine them on the shelves of our favorite cluster of characters.

Books for Fans of Sense8

The Lazarus Project by Aleksander Hemon

Written by one of the Sense8’s co-writers, Aleksander Hemon, The Lazarus Project is set partly in Chicago and partly in eastern Europe. It is told partly from the perspective of Vladimir Brik, a struggling Bosnian writer who wins a grant that takes him back to eastern Europe to track down the story of Lazarus Averbuch, a Jew who escaped to the Chicago in 1909 only to be killed by police when he was suspected of being an Anarchist.
Like Sense8, the story is told from multiple perspectives, that of Brik in the present day and Lazarus’s sister Olga at the turn of the century. It is also a melancholy love note to Chicago that Will the Chicago Cop would love, and has a bit of dark humor true to the fans of the series.

Wild Seed is a meditation on personhood and legacy by the one and only Octavia Butler. It also spans centuries and continents. The two main characters are Anyanwu, an immortal African shapeshifter who is the mother and grandmother of a multitude of generations, and Doro, a being that can insert his “soul” into the bodies of others.

The book is full of others with unique abilities and is also a meditation on the meaning of sex and identity, and its daring blend of history and science fiction will be a delicious delight to every member of the Sense8 fandom.

Tipping the Velvet by Sara Waters

I have always imagined a couple of dog-eared copies of Tipping the Velvet in Nomi and her girlfriend Amanita’s San Francisco apartment. This is a wonderfully queer love story that is part gothic novel and part blissful escapism…and the sex is hot!

Tipping the Velvet is about Nan King, an Oyster Girl–turned–music hall King. It is also honest about how dangerous late Victorian London could be for anyone in the LGBT community. Even so, this book is a page-turner and somehow rejoices in those who refuse to be anything but themselves.

The Collected Poems of Octavio Paz

Just like Sense8’s creator Lana Wachowski, Mexican Poet Octavio Paz understood that art was love made public. His poetry spans love, beauty, landscape, love, identity, drugs, and many other things. His lines transport us far beyond. Like Sense8 he understands that bodies and souls are not two separate entities, but things connected.

This collection is undoubtedly one that Hernando, Lito’s art professor boyfriend, probably left notes in. It is one of those books I can imagine him reading to Lito after he comes home from a long day shooting his latest film. As Hernando reads aloud, all the other Sensates stop to listen.