My husband works in a grocery store, and about a month ago he noticed that the book collection bins were overflowing. More than overflowing—several stacks of books had appeared around the collection bin and it had just started to rain. He’s a book lover, and he hates to see good books get ruined, so he talked to his manager and got permission to haul the pile indoors to await collection. His manager called the company, Big Hearted Books & Clothing, to come get their donations.

But there was a problem: Big Hearted Books never showed up and, it turned out, would not be showing up. 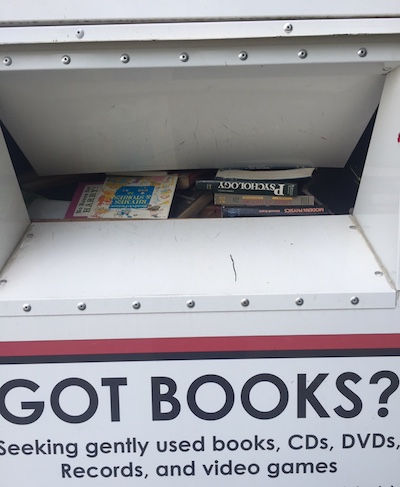 A full book donation container at my local dump in mid-May.

Death of a book recycler

Big Hearted Books & Clothing, of Canton, Massachusetts, declared Chapter 7 bankruptcy this spring. The company’s assets are being sold off by a trustee, and those proceeds are being used to pay the company’s creditors.

The company’s closure is a loss for New England readers. Big Hearted Books’s more than 1,000 donation containers have served as repositories for the region’s unwanted and used books since 2009. The company, a for-profit, collected the books, donated some, sold others, and recycled the balance.

The company’s website cites embezzlement by an employee as the reason for its bankruptcy (complete with that employee’s name and a photograph) and Worcester attorney James P. Ehrhard, who has represented Big Hearted Books during the bankruptcy proceedings, confirmed that embezzlement was a contributing factor. The company had wanted to file for Chapter 11, he said, to reorganize and keep collecting books, but was unable to do so, and forced to liquidate.

For book lovers in the Northeast, the result of the bankruptcy is closed or overflowing collection bins and one resource less for book donors and local library sales. 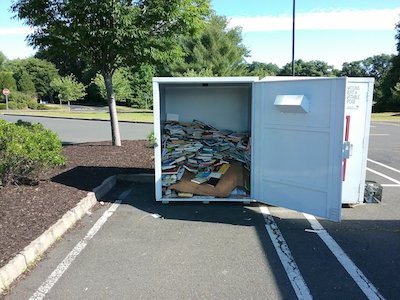 Some of the containers are periodically emptied by workers in unmarked panel trucks, others remain full, and some have been closed.

Library sales Are Down a Resource

When it became obvious that the pile of books in the grocery store was not going to be picked up, the store manager asked my husband if he could get rid of the books. Full disclosure: our family took what we wanted from the pile, and brought everything else to our local Friends of the Library group for their annual book sale. We discovered that they too were talking about Big Hearted Books.

“We don’t have any storage space, so at the end of the sale we have to find places for these books,” said Del Shilkret, president of Friends of the Granby Public Library.

Turns out, many local Friends groups in the Friends of the Connecticut Library organization relied on Big Hearted Books.

That’s a service one of its competitors charges for, and one that’s tremendously helpful to the volunteers who run book sales, many of whom are in their 60s, 70s, and 80s and can’t do a lot of hauling themselves—especially after a long sale.

“Our problem is now: what do we do with these leftover books?” said Chapron. She joked that donating books can be either very easy or very difficult and this year, donating books may be on the difficult side for Library Friends in the Northeast.

Libraries often have thousands of books left after sales. While there are still two companies that take leftover books in the area—Thrift Books and Discover Books—one company charges to remove books, and paying for book removal is counterproductive for Friends of the Library, who are trying to raise money for their local libraries, not spend it.

Big Hearted Books has also been missed earlier in the library book sale process. The donations library sales can’t use—the billionth copy of The DaVinci Code, for example, or obsolete travel guides—used to be taken by some volunteers to the Big Hearted Book containers. Now they may go into the library dumpster, something the library volunteers would like to avoid.

Chapron points out that this is not the first book recycler that’s unexpectedly closed its doors—Friends of the Connecticut Libraries have survived other closings and soldiered on with their sales, but this closing has caused distress at a time of year when many libraries are starting to get ready for their annual sales, especially since another local book donation company is moving to Baltimore, and the state has made it more difficult to donate books to prisons and prison schools.

The Book donation bins: staying, going, or filling up fast?

So what is going on with the Big Hearted Books containers?

“We have no idea,” says Ehrhard. He says his office gets a lot of calls about the donation bins. He passes those calls along to the trustee in charge of selling off Big Hearted Books’s property.

I reached out to that trustee to find out what’s happening with the containers, but calls and emails were not returned.

Those overflowing bins are being taken care of slowly by someone, although it’s unclear who is doing the collecting. Over the month I’ve been reporting this story, signs bearing the same message as the letter on Big Hearted Books’s site (complete with message about the embezzling employee) have been appearing on some of the collection bins, and panel trucks have appeared to empty others. The bin at our local transfer station has been papered over and the volunteer there told us that old books are just going straight to recycling now. 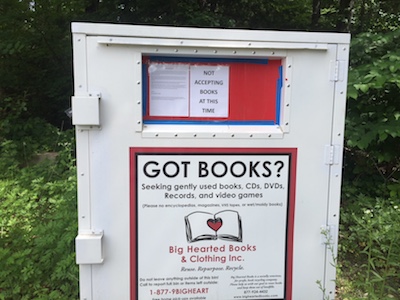 The same book donation bin at our dump, a week later.

Probably the most optimistic information comes from an unidentified person who was emptying the bin this week at my husband’s place of work. My husband, asked by his boss to collect more books that had piled up in the parking lot, came to work to find an unmarked panel truck had arrived there first.

The man unloading the bin said the books are still being taken to Sharon, Massachusetts, just as they were when Big Hearted Books was in business. The donation containers themselves will be getting new labels soon, he said.

Does that mean a new used book donation company is taking over the bins for Big Hearted Books? The man wouldn’t say, but our area sure hopes so.