Maybe you’ve seen the book challenge that’s been rocketing around Facebook lately: for a week, you post a book cover every day of a book that’s impacted your life (and tag someone, if that’s your bag).

It feels like everyone I know has been doing this challenge for the last month, and my feed has been filled with childhood reads and favorite books for weeks. But when someone finally tagged me I realized that some of my biggest life-changers, the reads that really influenced me, weren’t books I’d loved. They were the ones I hated. 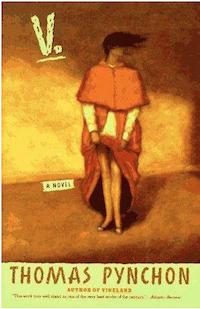 Case in point, I despise V. by Thomas Pynchon.

I hate everything about that book.

I hate the way it was introduced to me (given to me by a guy I was seeing, who felt I should read it before picking up Gravity’s Rainbow, as I’d planned to do).

I hate that I read it anyhow, twice, because I didn’t trust my own opinion of the book the first time. (I was young.)

I hate that despite the fact I’ve read it twice, I cannot remember anything about it but a ricer, something about Egypt, and a plausibly deniable misogyny that pervades the entire book and that I just could not talk to my friend the Pynchon fan about because trying to talk about it was like trying to find cockroaches in the dark with a flashlight — they’re definitely there but you can’t catch them with the beam.

As much as I hated V., though, it’s a hugely important book for me that’s impacted the way I’ve read ever since. But not for the reasons that the book’s fans might assume:

V. is just one of the books on my influential book list that I didn’t like. Others include the Orson Scott Card novel that taught me that beloved authors can and do manipulate their readership. Or Alan Moore’s The League of Extraordinary Gentlemen, which I didn’t hate exactly, but which made me question the author’s liberal use of sexual assault. Or the pop psychology book that made me so mad I nearly called the author.

I think books we don’t like sometimes impact us more than the ones we do because they make us uncomfortable. Discomfort almost always forces you to examine your choices.

If you decide to finish reading a book you hate, you’re choosing to subject to something that makes you uncomfortable. If you’re anything like me, you’ll then spend the next several years saying something like “why did I read 500 pages of a book I hated twice?” Ask yourself that question more than once and you’ll come away with some answers about yourself and your reading habits.

Have any books you hated changed your life?