Among the great feminist works of the 20th century, Angela Carter’s extensive bibliography plumbs the depths of the feminine psyche. In her many short stories, from the ever-popular Bloody Chamber to her cheeky retelling of Puss-in-Boots, she explores the rich tapestry of female sexuality and desire with more honesty than most writers would dare.

Revisit the sumptuous and insightful prose of one of the 20th century’s most beloved feminist writers with these 32 quotes. 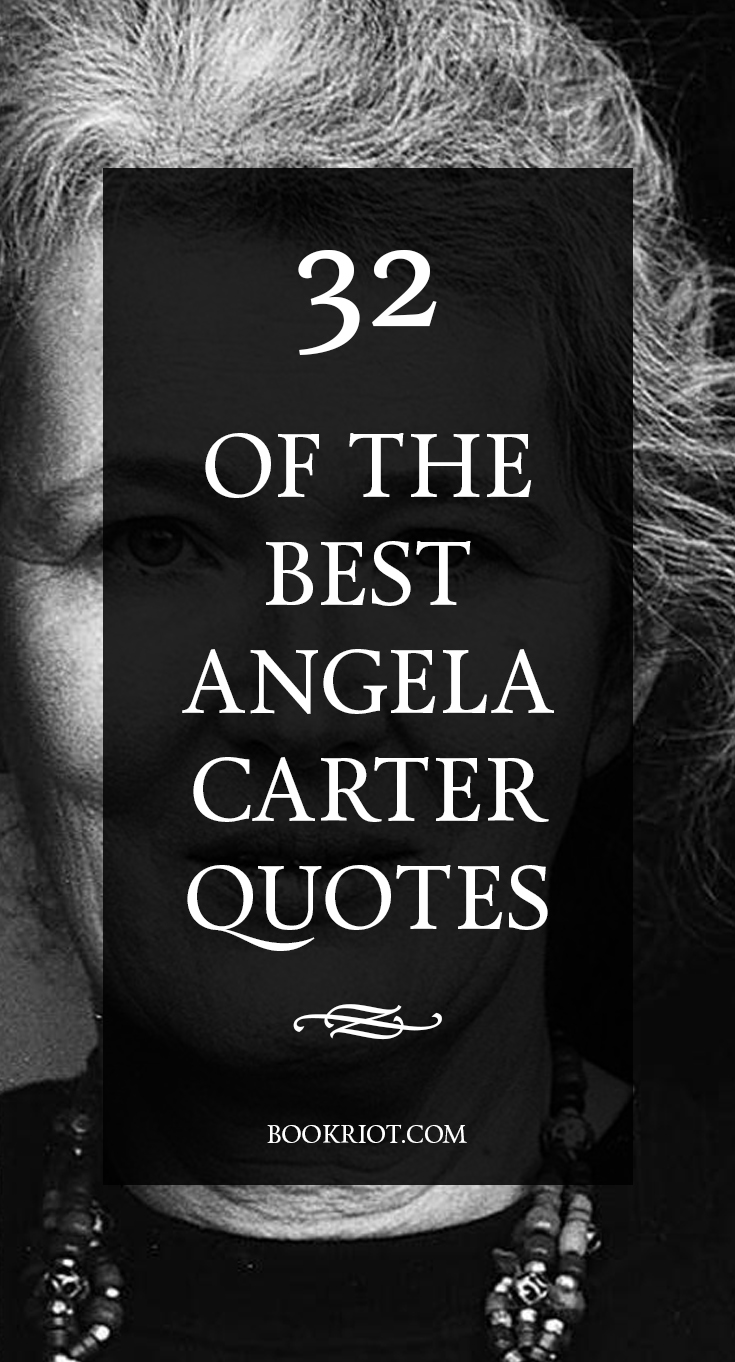 “She herself is a haunted house. She does not possess herself; her ancestors sometimes come and peer out of the windows of her eyes and that is very frightening.”

“Those are the voices of my brothers, darling; I love the company of wolves.”

“Anticipation is the greater part of pleasure.”

“There is a striking resemblance between the act of love and the ministrations of a torturer.”

“Love is desire sustained by unfulfilment.”

“For all cats have this particularity, each and every one, from the meanest alley sneaker to the proudest, whitest she that ever graced a pontiff’s pillow—we have our smiles, as it were, painted on. Those small, cool, quite Mona Lisa smiles that smile we must, no matter whether it’s been fun or it’s been not. So all cats have a politician’s air; we smile and smile and so they think we’re villains”

“Like the wild beasts, she lives without a future. She inhabits only the present tense, a fugue of the continuous, a world of sensual immediacy as without hope as it is without despair.”

“The girl burst out laughing; she knew she was nobody’s meat.”

“I desire therefore I exist.”

“Some cities are women and must be loved; others are men and can only be admired or bargained with.”

“Love is the synthesis of dream and actuality; love is the only matrix of the unprecedented; love is the tree which buds lovers like roses.”

Nights at the Circus

“Out of the frying pan into the fire! What is marriage but prostitution to one man instead of many? No different!”

“We must all make do with the rags of love we find flapping on the scarecrow of humanity.”

“Despair is the constant companion of the clown.”

“If women allow themselves to be consoled for their culturally determined lack of access to the modes of intellectual debate by the invocation of hypothetical great goddesses, they are simply flattering themselves into submission (a technique often used on them by men). All the mythic versions of women, from the myth of the redeeming purity of the virgin to that of the healing, reconciliatory mother, are consolatory nonsenses; and consolatory nonsense seems to me a fair definition of myth, anyway. Mother goddesses are just as silly a notion as father gods. If a revival of the myths gives women emotional satisfaction, it does so at the price of obscuring the real conditions of life. This is why they were invented in the first place.”

“A free woman in an unfree society will be a monster.”

“In his diabolic solitude, only the possibility of love could awake the libertine to perfect, immaculate terror. It is in this holy terror of love that we find, in both men and women themselves, the source of all opposition to the emancipation of women.”

“Hope for the best, expect the worst.”

“He was a lovely man in many ways. But he kept on insisting on forgiving me when there was nothing to forgive.”

“A mother is always a mother, since a mother is a biological fact, whilst a father is a movable feast.”

“Our fingernails match our toenails, match our lipstick match our rouge…The habit of applying warpaint outlasts the battle.”

“She was no malleable, since frigid, substance upon which desires might be executed; she was not a true prostitute for she was the object on which men prostituted themselves.”

Sayings & Quotes from Other Works

“Proposition one: time is a man, space is a woman.” –The Passion of New Eve

“She was like a piano in a country where everyone has had their hands cut off.” –Saints and Strangers

“Reading a book is like re-writing it for yourself. You bring to a novel, anything you read, all your experience of the world. You bring your history and you read it in your own terms.”

“Cities have sexes: London is a man, Paris a woman, and New York a well-adjusted transsexual.”

“Is not this world an illusion? And yet it fools everybody.”

“For most of human history, ‘literature,’ both fiction and poetry, has been narrated, not written—heard, not read. So fairy tales, folk tales, stories from the oral tradition, are all of them the most vital connection we have with the imaginations of the ordinary men and women whose labor created our world.”