Pride Month is here! Time to celebrate queer characters that make us happy. And in my case, no queer character makes me happier than Forsythe Pendleton Jones III, more commonly known as Jughead.

Every Christmas as a kid, I could rely on good ol’ Santa Claus to leave an Archie Digest or two in my stocking. I’d enjoy them, and then I’d put them on a shelf and never touch them again. Archie Andrews just couldn’t hold my interest the way Harry Potter or Steve Irwin could.

Cut to *cough, cough* years later, and the folks at Archie Comics announce they’re taking the characters in a whole new direction. Among the changes? Jughead Jones, so often the voice of wisdom among his hormone-fueled cohorts at Riverdale High, would officially come out as aromantic and asexual.

One could argue that this isn’t that big of a deal. Jughead was always basically aro-ace anyway, even if the creators never heard of such a concept. But that’s precisely what made the announcement so momentous. Before, the fact that Jughead preferred burgers over girls was just a joke, deployed for easy jokes. When girls—most notably Big Ethel—chased after him despite his obvious disinterest, we laughed. Ha, ha, isn’t it funny that no one respects Jughead’s clearly defined boundaries?

But now, in this new Jughead series, Jughead’s interests (and lack thereof) are finally being treated seriously (or at least as seriously as anything else in the series). I couldn’t get my hands on the collected editions fast enough. 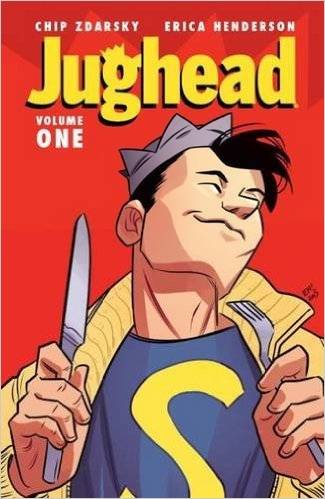 Right from the start, the comic impressed me with its vibrant artwork and intensely clever writing. But that wasn’t the best part. When Jughead bemoaned his friends’ obsession with romantic relationships and the pursuit thereof, I smiled wider. When he took Archie to task for implying asexuality wasn’t “normal,” I practically vibrated with glee. This was me! Here were my thoughts, my preferences, my confusions in the mouth of a comic book character that I’d been fond of since childhood. I’m not the crying-with-happiness type, but if I was, my Jughead TPBs would be perpetually moist.  Is this what straight people feel like all the time? This is amazing.

Now of course, like any series, this one isn’t perfect. As Nicole pointed out, the book has suffered at least one misstep in terms of portraying Jughead Jones’s asexuality. In Issue 15, Sabrina the Teenage Witch flubs a spell and accidentally makes every girl in Riverdale fall madly in love with our touch-averse protagonist. Again, it’s an accident—she only wants Josie and the Pussycats to “become big fans of Jughead Jones” so they’ll give him star treatment at their concert, and things quickly escalate from there—but it still makes for uncomfortable reading for many aromantic and/or asexual fans. And then there’s the TV show Riverdale, which has insultingly decided to ignore Jughead’s orientation all together. I have avoided Riverdale for that very reason.

It’s not as if I’ve never liked or identified with a character before now. I can enjoy romantic stories and sympathize with a character’s relationship troubles (assuming they’re well-written and not riddled with clichés or offensive tropes). Nor would I want every single character to be exactly the same; everyone should have the chance to feel like I do when I read Jughead. But aro-ace characters are still so rare that I can’t help but glom onto the one I’ve got. That may be sad, but the discovery process has been one of mind-blowing, heart-stopping excitement.

I understand this character, perhaps better than any other, and he understands me. The appearance of any LGBT character is always enough to make me giddy, but before reading Jughead, I had no clue how much I specifically wanted a character like him. A character like me. Even the mere thought of this comic is enough to fill me with pure platonic love.

In fact, why am I still writing this when I could be rereading it right now?