This post may contain mild spoilers for HBO’s Fahrenheit 451.

The day after HBO’s adaptation of Fahrenheit 451 aired in May, I scanned the headlines to see who had shared my enthusiasm for it. An unscientific survey of my Google news search told me I was in the minority; reviewers and Bradbury enthusiasts were unimpressed.

My first reaction was whaaaaaaaaaat?

It’s a beautiful film. (The fire scenes! The caches of contraband books!) The cast, led by Michael B. Jordan, does powerful work. The subject material is relevant. 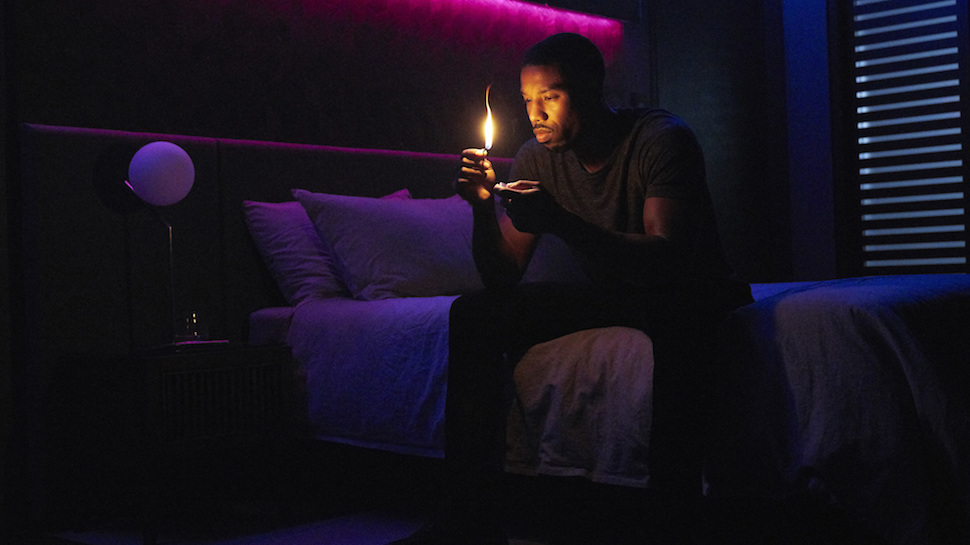 And that’s when it sank in for me that it’s not really surprising reviewers aren’t thrilled with this version of the classic, because this Fahrenheit 451 has been updated. Like, big time. It takes shots at social media, Silicon Valley, and emoji. It focuses on the identity politics angle of the source material. That refresh didn’t play well with many critics.

But you know what? I think you should give it a chance.

The Reboot is Relevant

It’s no spoiler to say that this adaptation strays from the plot of Ray Bradbury’s book. The original book was written in the 1950s about a future after 1960. In 2018, “parlor walls” (flat screen TVs, if like me you don’t remember your high school summer reading) and short attention spans are our everyday life, and books aren’t all made out of paper, so some things obviously had to change.

This movie, however, could almost be set in the same universe as the original. The firemen of this film aren’t blue-collar workers hunting down books to burn. Books have been outlawed for generations and the oldest Americans barely remember a time when people read. There just aren’t that many actual books left to burn in this universe. Despite that, the firemen still have an important role to play in society: entertainment.

In this adaptation, Jordan’s Guy Montag isn’t just some dude with a soul-crushing job—he’s a social media star. Whenever there’s anything at all to burn, he stars in something called the “fire show,” a news coverage/reality TV/propaganda exercise which is broadcast to everyone in his city and even projected onto skyscrapers. People watch and they comment, mostly using emoji, which float up the screens, Facebook-like.

The emoji are part of a 1984-style attempt to pare down language and control the public, cooked up by a government that is very likely the descendent of today’s biggest tech companies.

As is also true in Bradbury’s novel, books are outlawed because various groups of people were offended—racial minorities were offended by racist works, then white people were offended that other people were offended. (Be warned: there is a racial slur in that scene.) People demanded convenience and gave up their privacy and their rights to get it. Literature isn’t really being withheld from most of the population; most people in this society are furious at the very idea of books. They’re living in the dystopia they wanted.

These plot points have not made the interwebs happy. Which, I guess, is no surprise. Anyone looking for the ‘60s adaptation was bound to be disappointed, plus the HBO film needles us deliberately: poking at things we use and love every day, like emoji and social media. More jarringly, it invokes identity politics.

It Makes You Examine Questions You’d Rather Not

One of the questions this film Fahrenheit 451 asks is “how much are you willing to give up to avoid being offended”? In the 60-year-old source material, this question is tolerable, and almost forgettable.

In light of some of the debates and outright fights we’re having today about offensive material, censorship real and imagined, and identity politics in all its forms, addressing this question feels uncomfortable, almost problematic.

But here’s the thing. If science fiction doesn’t ask those questions, who will?

It’s science fiction’s job to pull at a loose thread in the fabric of our society, to see how far that thread will unravel before the whole piece comes undone. The book did that. The 1960s film did that. This film does that, and when it comes to addressing the banning of offensive material, I think this movie takes the debate more seriously than Bradbury did, arguing about the reasons why people ban material in a way that comes off as thoughtful, rather than glib. The result will make you recoil a bit at times, but it’s still worth seeing.

Fahrenheit 451 isn’t perfect; its plot gets kind of confusing in the second act, and it is quite literally dark (if any scenes take place during the daytime I don’t remember them), but it’s good sci-fi.