To honor fatherhood through a realistic and heart-felt view, let’s take a look at Go Because I Love You. Jared Harél’s debut full-length collection, which is also this year’s Diode Editions Book Award winner, is a collection of relationship poems. 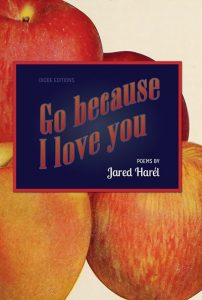 These relationships go beyond romantic couplehood and dive into family life. This caught me a little off-guard at first. Little children are not part of my wheelhouse. Still, the way in which children pop up in these poems weaves an honest story of family life. Though the book is set up in three parts; the poems speak to me in six.

A few poem titles in this collection begin with the word “first.” Relationships have a lot of firsts: the first time your eyes meet. The first words you say to each other. The first dance. The first date. The first time you meet each other’s friends. The poem “First Witness” reveals a first after this couple has been together and married. The dad reveals the “evidence / of we” between the couple. Only the couple knows that they are pregnant. It’s their secret! There are several firsts here: the first thought, the first moment of realization, and it’s their first child.

A whole lot of truth-talking comes up in several poems. “Father of Daughters” compares the instincts of an animal knowing it might one day be eaten to the instincts of knowing you might one day be a dad. The comparison seems really out there, but it makes complete sense. Both those thoughts are scary. When he says he knew he’d be a dad to a daughter, he states, “now that I am, I am torn apart.”

That line makes even more sense in light of another “first” poem: “First Mark.” There’s fear in the responsibility of keeping someone else alive. The dad says, “I fear for her life, this little life / that must be persuaded / / not to swallow glass, or dash / in front of trucks.” These day-to-day duties are constant and necessary. They are duties of love.

Part III: Fatherhood Is About Making Things Up

Kids ask a lot of questions because everything in the world is new. Parents are constantly on call for answers to every single subject. “New View” shows just that idea. The dad tells his daughter at sunset, “the sun’s going to bed, and the colors / are its pajamas.” That sounds so sweet!

The dad then admits, “I say this crap, and it becomes / / her childhood.” So while adults make things up for entertainment, kids take it all in and believe it to the end. This is the power of parenthood.

“Schoolyard with the United States Painted on Asphalt” and “Playground” both take place in kids’ spaces. In the latter, the dad says “Now that I’m a father, I am here / all the time playing…My daughter has her friends / and I have mine.” This scenario appears across every park and playground.

Yet the poem makes it intriguing and new as the dad describes how their “victories slink / / through juice box straws: / the tantrum skipped, that girl who claws / all the other girls shipped / away on vacation.” These seem like trivial occurrences, but they are essential for a pleasant day at the park. These are the victories of fatherhood.

What struck me most are the poems that keep the kids in the picture when the main topics are more political. “You Want It Darker” unfolds after the 2016United States presidential election. The dad says, “[I] strap my son into his Cheerio- / encrusted stroller and wheel him to his ‘baby-taps’ / dance class / . . . / It all culminates / in the world’s saddest rendition of ‘If you’re happy / and you know it.’”

This moment is a bit funny and a bit sad. It shows that no matter what’s happening in the world, dadhood doesn’t stop. Or maybe we pay even more attention and we feel emotions so much more intensely because that feeling of parenthood doesn’t stop.

“First Answer” sums up the essence of this collection’s take on being a parent. When asked by his daughter when he became an adult, the dad responds, “I became one / the day you were born.”

While there’s more to the collection than poems about being a dad, the dadness shines through in all those other ones, too. I guess once you have kids, they appear in everything you do.

For more fatherhood bookishness, check these out.