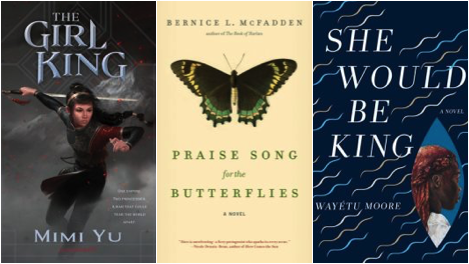 As we all know, conventions can always be more inclusive, from making sure that people with disabilities have accommodations to speak on panels to bringing in more authors and professionals of color to speak. BookExpo is no exception. Rioter Katie McClain wrote about this issue after last year’s BookExpo, and after attending more than one panel where authors, editors, agents, and publishers stressed not only the appeal of inclusive works but also the financial boon to the publishing industry of trying to be more inclusive, it’s time for our conventions to reflect our goals.

I hope that next year’s BEA continues to grow more diverse, whether on its panels, its shelves, or its attendance. Rioter Christina Orlando is holding a GoFundMe to help minority bloggers, booksellers, educators, and librarians make it to BEA in the future. Here are some reads by authors of color that were featured at the 2018 BEA. 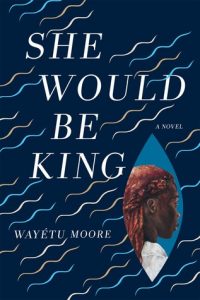 Moore’s debut novel tells a historical story of Liberia’s early years. She Would Be King tells its story through magical realism that incorporates the voice of the wind into a novel that has three other narrators. (September 11, 2018)

Another debut novel frames a multigenerational story of 12 total narrators who all find their way to the Big Oakland Powwow. I’ve heard fantastic things about this novel that attempts to tell the stories of urban Native Americans. (June 5, 2018)

A Place For Us by Fatima Farheen Mirza

In her debut, Mirza tells the story of an Indian American Muslim family who has come together for a wedding. For the first time in years, an estranged son returns to the family, and it has to cope with its intergenerational struggles and inner demons. (June 12, 2018) 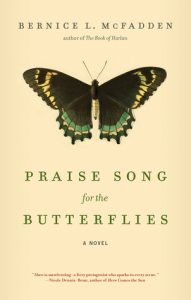 When a representative from Akashic Books pressed this into my hands, she told me two things: that it was heavy reading, but that it was beautiful. A father in West Africa presses his daughter into ritual servitude. Years later, Abeo is rescued, but the path to recovery is anything but easy. (July 3, 2018)

In yet another debut novel, two star-crossed lovers in Korea are forced to make impossible choices as the war separates families and creates refugees. It’s a story of war, ill-fated love, and an attempt at independent womanhood. (August 7, 2018) 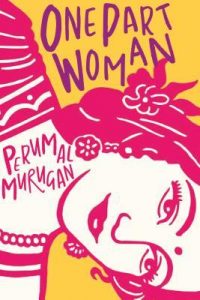 One Part Woman by Perumal Murugan

An Indian classic that was originally published in Tamil, this novel started conversations about caste and female empowerment in India, and is centered around a couple’s inability to conceive a child. Grove Press is rereleasing it this year. (October 9, 2018)

After the success of National Book Award finalist Pachinko, Grand Central Publishing is rereleasing Lee’s critically-acclaimed first novel. This one is about a daughter of Korean immigrants who desperately wants to live glamorously in Manhattan even though she can’t afford it, which is something I think many of us can relate to. (June 5, 2018)

Cas Russell is a nerd whose superpower is math, and she’s about to face a villain who can make people’s minds into Moebius strips. This sci-fi thriller is being rereleased by Tor Books, and I am unbelievably excited. (October 2, 2018) 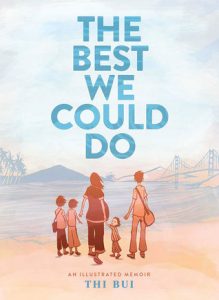 This illustrated memoir about a family immigrating to America from a war-torn Vietnam is now out in paperback. This absolutely gorgeous graphic novel outlines the struggles of motherhood and what it means to be a parent. (April 17, 2018)

John Lewis continues his March story of the Civil Rights Movement and protest with Run. This volume looks at the forces of white supremacy following the Voting Rights Act, as well as responses to it, such as the origins of the Black Panther movement. (August 14, 2018) 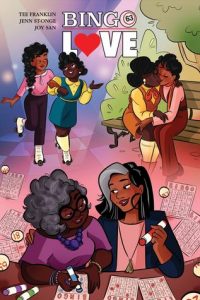 I saw not one but two different signing lines for this comic get a huge response at BookExpo. Hazel Johnson and Mari McCray met at church bingo in 1963, but forced apart due to family pressure and prejudice, they meet again at a bingo hall in their mid-60s. Once published with the help of Kickstarter, this is now being rereleased by Image Comics. (February 20, 2018)

The first in a trilogy set in Nigeria, this strange, twisting science fiction tale is about the town of Rosewater, a community residing in an alien biodome where government agent Kaaro gets sucked into a murder investigation that will reveal a lot about their future. (September 15, 2018)

Lei is horrified when she is chosen as one of eight Paper Girls to serve the king. But Lei once saw her mother snatched by the royal guards, and she isn’t content to go quietly through her training. Instead, she begins an illicit f/f romance that takes everyone by surprise. (November 6, 2018) 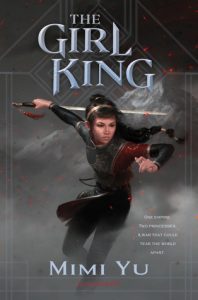 One of the most buzzed out YA upcoming releases at BookExpo, The Girl King is about two sisters who become rivals in a war to become Emperor after their father unexpectedly skips over them to make their male cousin his new heir. (January 8, 2019)

The first book in a new trilogy. Bipolar heroine Jetta sees spirits, which helps her family’s famed shadow puppets move without strings. Heilig tells a tale of colonialism, rebellion, and a struggle with mental illness, all set in front of a stunning magical backdrop. (September 25, 2018) 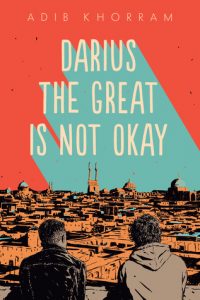 Half of the people I spoke to at BookExpo were raving about Darius the Great Is Not Okay. Darius is struggling with depression, and is making a trip to Iran that he’s not prepared to face. But his neighbor is a boy named Sohrab, who makes him feel right at home. (August 28, 2018)

The author of Dear Martin tells the story of a fun, twisty, queer love triangle about three fantastic characters and their struggle with messy line between love and friendship. (October 9, 2018)

This collection about breaking conventions is in partnership with We Need Diverse Books. It features ten short stories, a graphic novel, and a one-act play, from authors including Nicola Yoon, Malinda Lo, Daniel José Older, Melissa de la Cruz, and more. (August 14, 2018) 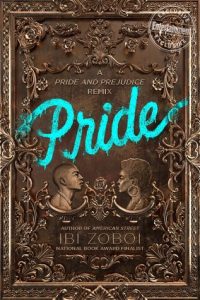 It’s a modern retelling of Pride and Prejudice featuring an Afro-Latinx heroine struggling with the gentrification of Bushwick, who is peeved when the wealthy Darcy family moves in across the street. This book hypes itself. (September 18, 2018)

Noah just got cut from the basketball team, and his love interest Sam is anything but interested in romance. He’s long given up, but luckily he has a friend Walt who is pretty sure they can make a big comeback. (October 2, 2018)

The Day You Begin by Jacqueline Woodson illustrated by Rafael López

Jacqueline Woodson, the 2018–2019 National Ambassador for Young People’s Literature and author of Brown Girl Dreaming, tells a story about being different and taking those risky first steps.