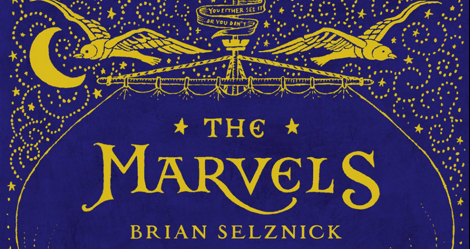 I’ve always loved illustrations in books, and it makes me sad that stories intended for adults so rarely come with them. Good illustrations go such a long way, not only to pep up my imagination and give movement to a story, but to add to the overall mood or tone I should be getting from the prose. But even in stories for young readers, the illustrations tend to be simply peppered in, or included only on the page where a new chapter begins. And so, I was pleasantly surprised, if not totally blown away, when I read a couple of books that went above and beyond.

When I first acquired a copy of The Invention of Hugo Cabret, I had no idea who the author was, or that the book was illustrated at all. I’d seen the movie about the boy in the clock tower with his automaton, and I liked it enough to go on to read it. But when I finally got it in hand, it felt way too big. Bigger than I bargained for. Scary. I didn’t even crack it open until the day I finally decided I was going to tackle the big book on my shelf, and found that it was actually a super quick read because of the sheer volume of illustrations contained therein.

I fell in love with those pencil drawings, and how simple but yet lovingly crafted the whole experience of reading Hugo was – it had me grinning from ear to ear. As such, I had no trouble picking up The Marvels, despite not having even read a synopsis. I’ll give you one here, though: “Two seemingly unrelated stories–one in words, the other in pictures–come together. The illustrated story begins in 1766 with Billy Marvel, the lone survivor of a shipwreck, and charts the adventures of his family of actors over five generations. The prose story opens in 1990 and follows Joseph, who has run away from school to an estranged uncle’s puzzling house in London, where he, along with the reader, must piece together many mysteries.” 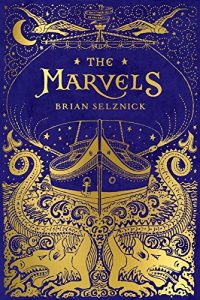 For Marvels, Selznick took his inclusion of illustrations much further than he had for Hugo. The first story, about Billy Marvel, the shipwreck, and his lineage thereafter, is told entirely in images. If you’ve ever been captivated by a silent comic, you’ll certainly be enthralled by this nearly 400-page stretch of pencil drawings. Then the story abruptly ends, and we’re thrown into the next tale about Joseph, his uncle, and the strange house he inhabits in London, which is actually modeled after a place you can visit for real. The stories eventually come together in the most beautiful way, and really examine the idea that every object has a story and can take on a life of its own. It examines loss and grief, and questioning where you come from as well as how to get to where you’re going; asking the right questions, and listening for the right answers.

The story that is told in prose could not have been told in silent pictures, and the story that is in silent pictures could not have impacted me in quite the same way if it had simply been told to me with words. Marvels is a quick read – I gobbled it right up in one sitting – but just as with my delightful experience with Hugo, it led me to question why more books aren’t so generously incorporating their prose and illustrations.

Some might make the argument that leaning too much on images takes away from the words, or speaks to laziness on the part of the author, but I don’t think that’s true. Nor is it true that the more illustrations are present in a story, the more childish the content, as we all know because we love comics, and comics are for everyone. The reality of the matter is that both can coexist in harmony, without depending too much on – but at the same time not existing without – each other. As I mentioned earlier, the story told in pictures is almost 400 pages long, and there is nary a caption in sight to expand on or explain the content. And it tied in perfectly with the mystery of the story in prose. That is pure magic.

I love that Selznick’s storytelling style is breaking new ground, but at the same time, I wish it were already ubiquitous in novels. Not just because it bridges the gap between comics and prose ever more, but because more art out there telling stories just makes the world a better place. Footnotes and captions are welcome, but not necessary. Just tell stories through the art: people examining the pages and understanding their meaning.

Silent comics are one of my favorite forms of storytelling, and my love of Selznick’s magical stories are obviously influenced by this. Tell me – what novels have you read with memorable illustrations in them? Ones that really complemented the story, gave it some special sauce? The truly delightful ones? Let me know in the comments!