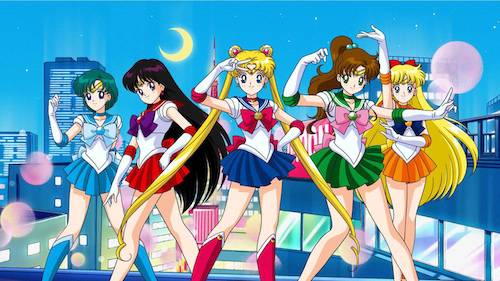 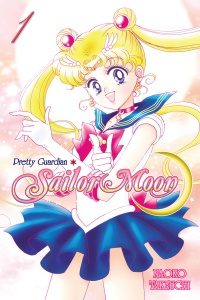 A few days ago, I was in the attic of my house, inching through the stacks of boxes left over from my last move while hunched to avoid spiking myself on the nails sticking through the roof. I had to find my boxes of books; at this point in my life I have more books than I have shelves, and it’s not like I’m going to get rid of any. And once I found that stack of former liquor boxes, I had a very specific one I wanted to find: the boxes filled with Japanese manga and the few editions I had translated to English.

I’ve been watching Sailor Moon Crystal, which mostly follows the manga (for both better and worse compared to the first anime) and I wanted to leaf through all the volumes again.

Flash back to me in high school. Sailor Moon was the first anime I ever saw—the Dic dub that came on after school. I was transfixed. It was a show about girls, focused entirely on them, about them being friends and defeating evil and then trying to go about their regular lives. I’d never seen anything like it. At a time when I was starting on the slow poison drip of “not like the other girls” and being encouraged by my peers and a lot of popular media to view female friendships with suspicion, it was a much needed antidote—one that was introduced to me by one of my few female friends. 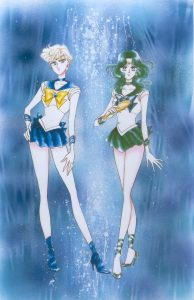 I was transfixed. I dialed in to the internet (yes, it was that long ago) and spent hours looking up everything I could about Sailor Moon. I found out that it wasn’t just a cartoon—it was a comic book, a special type called manga! I downloaded so many pictures onto the family computer that I used up all the available memory (something like all 256 MB of it…did I mention this was quite some time ago?) and got in trouble. I hunted down scanlations of the manga and read them—this was before you could buy translations, but you can bet I did that too as soon as they were available.

What I found in the manga was that there was so much more to Sailor Moon than we could get on TV. Rei and Usagi weren’t being weird and jealous at each other on the gorgeous black-and-white pages. There was Haruka and Michiru—lesbians, imagine that! And then the Sailor Starlights—in the manga, they were crossdressing women; in the anime I hadn’t gotten to see but read about eagerly online, they were men that transformed into women.

I’m not going to claim that there was a magical moment of self-realization for me there, even if I did spend part of high school with Sailor Uranus’s haircut. (And then was puzzled that my classmates all thought I was queer…funny how your peer group sometimes picks up on things about you before you notice them yourself, even if they can do it in the cruelest possible way.) But all of these things took deep root in me: the importance of women being friends with each other, their strength, their diversity, and the mutability of gender and its presentation. Sailor Moon in both anime and manga forms told me a story where women got to be as varied in personality and interest as I’d always seen men being in popular media, with the added benefit that their chief strength was love, not violence.

Which is to say that I will always be deeply grateful to Naoko Takeuchi, for teaching me to love and appreciate women, when so often we’re told to view female strength as weakness. Even if I no longer identify as female, I still identify with the Sailor Senshi, if that makes sense. I can still say that I’m definitely a Sailor Uranus kind of person. 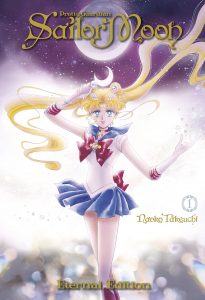 All I could find of my old manga were six volumes of the original Japanese release. I started hunting for translated volumes to finish my collection, because I’m missing half of the run. At which point I found out that there’s a new edition of Sailor Moon coming soon: Sailor Moon Eternal Edition. New art! More color pages!

Most importantly to me, it’s my old friends coming around again. I can’t say that I’ve missed them exactly, because they’ve never left my heart, but I still feel like we’re being reunited.