There’s this myth floating around that librarians have the luxury of reading for a living. While you may occasionally see a library staff member flipping through a magazine at a public service desk (these are likely to be journals that review materials, which a librarian might use to inform any new selections for the collection), chances are your local librarians are not just sitting at the desk reading. I’ve certainly been asked, “So, do librarians read all day?” and received the comment, “Wow, must be nice to have a job where you just read.” But the reality is, if I have a book in my hand at work, even if it’s open, I’m not really reading it. I might be assessing it as a candidate for weeding or determining if it’s relevant to a customer’s inquiry about a subject, but I am almost certainly not reading it. Except.

At my library, our children’s room includes eight computers (plus a catalogue computer and a reservation computer) in the children’s room. The kids like to play multiplayer games online, and it’s great to see them so excited to come in every day (every day) to play these games with each other. Some of them update us on their gaming progress, proclaiming with pride that they are now “super saiyan god” in a Dragon Ball Z game or exclaiming that one of the other players has stolen their key card in a game called Jailbreak. The eight computers sit in two rows of four so that when sitting at them, the kids face each other. With the multiplayer games, you can imagine there is a lot of communication among the kids. And sometimes, it gets loud.

When it’s unreasonably noisy, a physical reminder to manage their volume can be helpful to the kids. Depending on the time of year, either I or one of my coworkers will stake out in a chair at the end of the two rows as that physical reminder maybe two or three times a week. Sometimes, it’s less.

But it was silly to just sit there and do nothing productive other than serve as a reminder to not scream across the computers. So I started bringing books with me to the computers. Mostly, I stuck to books I would be reading for work anyway—things I had planned for the kids’ book club, new juvenile works to amp up my readers’ advisory, or things assigned by the children’s department for meeting purposes. But sometimes, just whatever I was reading in my free time. And something kind of amazing happened.

“Miss Abby,” one kid said. I braced myself for the usual question: “Do librarians read all day?”

He continued instead with, “What are you reading?”

So, I told them, I showed them, and I explained a little about whatever it was I had in my hand.

“Oh, cool,” they would say as this happened again and again, and return back to their game, satisfied.

Depending on the title, I’d recommend they look into it, or suggest similar things, as the brief conversation allowed. But this was about more than individual books, I soon realized. 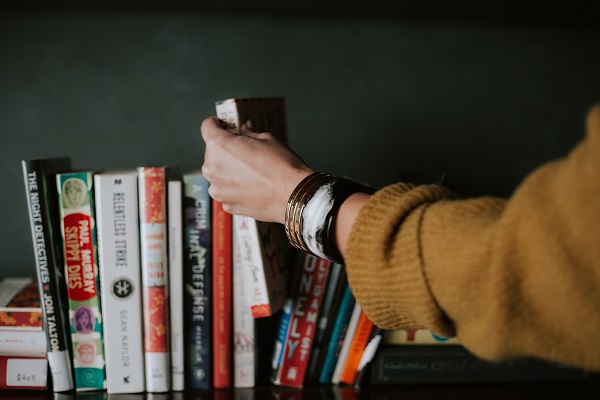 We want kids to read. We know that reading over the summer can help prevent what is called “summer slide.” And, of course, we know reading in general is a wonderful gateway to all sorts of things like increasing empathy, developing vocabulary, and improving relationships between children and their parents. But it seems we do little to promote reading, aside from annual summer reading programs (often involving some kind of prize incentive to read, which is fine but doesn’t do much to highlight the concept that reading in and of itself is a “prize” or thing to enjoy) and simply telling children and teens they should or must read because it’s “good for them” or because of some school assignment.

Meanwhile, in my weekly story time, I remind caregivers that it’s helpful to me if they model good story time behavior for their little ones. The babies, toddlers, and preschoolers learn quite a lot by observing older children and adults. Eventually, they catch on that story time is for participating and listening.

So, I thought, might the same work for older kids? If I modeled reading—if I modeled enjoying the act of reading—might it entice more kids to read?

It’s enough for me that they even ask, pretty consistently, what I’m reading anytime I’m camping out at the computers with a book. And I think it’s important to be honest with them about what I’m reading. When, last week, I had Adnan’s Story: The Search for Truth and Justice after Serial by Rabia Chaudry in hand and one kid, a twelve-year-old, asked what I was reading, I told him. He asked what it was about, and I said, “It’s about a teenager who was wrongfully convicted of killing his ex-girlfriend.” I left it at that, he nodded soundly, and went back to his game. Kids know what they’re ready for. If they’re uncomfortable with a book, they’ll put it down. And, what’s more, many of them seem to crave these seemingly taboo topics—topics that often reflect their real lives. When I demonstrate to them that these books do, in fact, exist, it’s another small temptation to read.

Librarians and library staff have been fighting the incorrect stereotype (among many others) that their jobs consist of reading all day long. And while I still have programs to plan, books to weed, research questions to respond to, and other things to worry about, I wonder if maybe, just maybe, we took a little time to read on the job and model the behavior we want to see, if we just might see our communities a little better for it.