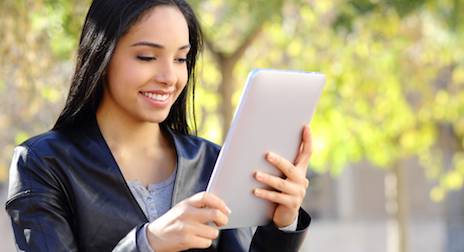 These can be depressing times if you’re a liberal. Bill Gates is promoting two new books he claims will make us optimistic. In an era where authors hawk their books as cure-alls but seldom delivery, it’s easy to dismiss Gates and his book recommendations. Especially since the two books are heavily based on statistics. However, they could be the psychological medicine we need. 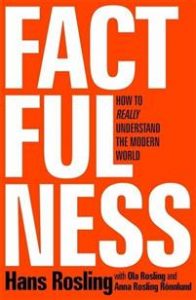 Gates recommends Enlightenment Now: The Case for Reason, Science, Humanism, and Progress by Steven Pinker and Factfulness: Ten Reasons We’re Wrong About the World and Why Things Are Better Than You Think by Hans Rosling. I find these books are making me more optimistic, but it’s very complicated to explain why. Pinker and Rosling overwhelm us with statistics and graphs. Yes, they are quite optimistic, but it’s hard to reconcile their numbers with the view of the world I get from the media every day.

These books plead with us to measure progress statistically. For example, if we graph the number of LGBTQ people getting married, it would start with 0 not too many years ago and swoop up to over 1 million people today. That’s tremendous progress. However, it’s hard to feel that when the news is full of hate from the religious right.

Reading Enlightenment Now and Factfulness can be intellectually challenging. Their statistics cheer our heads, but can that optimism overcome the gloom the daily news puts on our hearts?

Here’s another simple example. Let’s say you judge happiness by how often you get to eat Ben & Jerry’s Ice Cream. Currently, you eat it three times a week but feel deprived on the other four days. If you were shown a graph that plotted how you only ate ice cream once a week in childhood, twice a week in college, and three times a week after you got your job, would that visual representation of progress cheer you up? Probably not if you saw it on a day you didn’t eat ice cream. 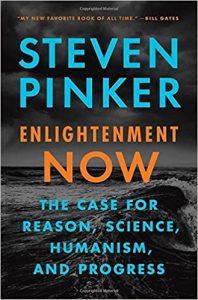 Would it help if you also saw statistics showing your weight had increased as you’ve eaten more ice cream? Does knowing you’re getting less healthy make you less hungry for ice cream? No, it doesn’t. What Pinker and Rosling are saying is we should feel good about progress even at the recognition of its cost. They also say that we can have more material progress if we learn to manage its costs.

For example, their philosophy might advise you to take the three pints of Ben & Jerry’s you’re eating now and divide them over seven days. That will make happier each night, at least statistically. Then tell you to join a gym and learn to eat healthier with the rest of your meals. That will cause you to lose weight. In other words, we should be able to solve our problems and get what we want too. My brain says that sounds good, but I’m not sure how it will feel if I think statistically rather than by emotional impressions.

Anyone who feels depressed about the future should read Enlightenment Now and Factfulness. Gates, Pinker, and Rosling might be right. We already know the news is bumming us out. Maybe knowing progress is actually progressing will make us less anxious. Understanding these books could be socially transformative. Watch the videos at “Bill Gates Wants You to Watch These 9 TED Talks” to see if you buy into this concept.