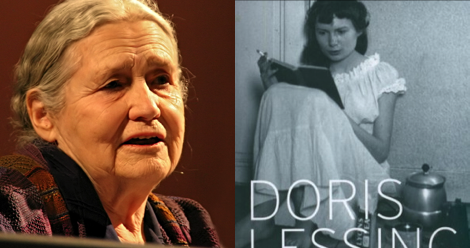 The Golden Notebook is one of those books you know you should read but need a good reason to start. So all I can say is, thank goodness for International Women’s Day! 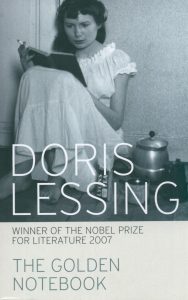 For six weeks, Doris Lessing took me and the other members of my book club back to 1950s London. Pervasive drabness, casual sexism and unglamorous Marxism; it was all there. In five differently coloured notebooks, Anna Wulf compartmentalises different aspects of her life – political, artistic, and so on. The novel tells of her struggle to attain unity out of chaos.

Though I wouldn’t call it an easy book to love, I admired her achievement. So I was surprised when our next meeting featured an impassioned debate about whether it was really a feminist book.

What follows is a short summary of that discussion (thanks to a fellow rioter for the format idea).

For: TGN shows the double standards that are applied to men and women who take multiple sexual partners. If a married man like Richard does this, it’s indulged, even considered inevitable. But when a “free woman” like Anna follows suit, she because a cause for concern, even inwardly. Especially inwardly.

Against: Even so, Lessing undermines the feminist cause by the way she portrays her female characters. They’re invariably neurotic, man-dependent, and teetering on the verge of a total breakdown (Anna and her many variations). Or they’re complacent, domineering or distant (e.g. Mother Sugar, Molly). If this is an unfair society, these women don’t seem ready for true equality. They’re weak.

For: Why is it held to be a mark of weakness to “crack up” when society seems to be cracking up all around you? All Anna does is try to live authentically in a hypocritical society. It’s a brave and noble endeavour, whatever the outcome. When Lessing wrote, only women at the margins were raising children alone, taking lovers, and having professional careers. So if these women seem vulnerable, she seems to imply that we should blame the objective social conditions that make them exceptional.

As for being sexually dependent on men, take this excerpt:

“She is falling into a lie about herself, and about women…that when she was with Paul she felt no sex hungers that were not prompted by him; that if he was apart from her for a few days, she was dormant until he returned…A woman’s sexuality is, so to speak, contained by a man, if he is a real man; she is, in a sense, put to sleep by him, she does not think about sex.”

Lessing’s women act according to such outdated ideas. They are only half-aware of their being “lies” but that is understandable, given their context.

Against: Doesn’t the ending suggest that women can lead fulfilled lives, without the need to go very far beyond first-wave feminism? Anna’s daughter, Janet, rejects her mother’s alternative lifestyle in favour of a “conventional boarding school.” Anna surrenders to her writer’s block and takes two jobs to fill an emptiness in her life. Perhaps, at a push, TGN preempts post-feminism, but that still doesn’t make it a feminist book.

For: Lessing certainly recognised that she was ahead of the curve. In her 1971 preface, she wrote: “some books are not read in the right way because they have skipped a stage of opinion.” She admitted to writing “as though the attitudes that have been created by the Women’s Liberation movements already existed.” So, far from a “happy ever after” ending, we get an advance warning of the post-feminist tide. The women who are ready to disown feminists while being all too ready to enjoy the gains they’ve won for them.

And the verdict is…

Against: I suppose your take on the novel really comes down to whether you find her chosen form—an intensely individual, personal, fragmentary perspective through which grand historical and social currents are filtered—an effective way to communicate ideas ahead of their time. Some readers will find her characters implausibly immersed in politics/philosophy, to the point that their personal and political concerns become indistinguishable. Given the seeming inability of “free women” to order and structure their lives, it’s hardly surprising if “post-feminist” readers struggle to identify with them.

For: Agreed. For others, TGN is simply the idea that “the personal is political” in novel form. And that there’s nothing inevitable about progress.