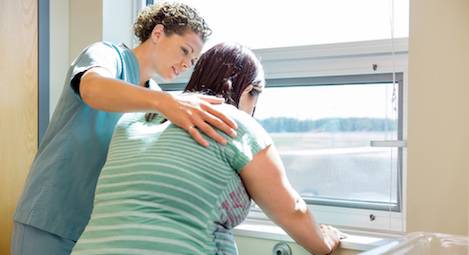 Any human who has considered having a child, whether because it was happening in nine months or because they were hoping to conceive, knows the impressive rabbit hole of thoughts connected to that concept. Even people who are 100% enthusiastic about parenting have plenty of fears and concerns.

When I got married and realized that my husband, at some point, was definitely interested in having children, I needed some time to get used to the idea. The way that I found to start processing was the same way that I’ve processed a lot of other life transitions: reading.

Specifically, though, audiobooks: I’ve found that these days, I prefer to save devoted words-on-a-page reading time for things that I’m going to truly enjoy. At the beginning, my pregnancy and birth investigation was a goal but not a pleasure, so I dug deep in my audiobook apps on my phone to find well-regarded books on the process.

In so doing, I calmed down about the process. I learned many things that actually make pregnancy more of a wonder and also more of a marathon, but in so doing I also figured out that there is so much meaning and life-affirmation and connection that comes from the incredibly hard work of being parents.

I also passed nearly every pregnancy audiobook next door to my husband, who in turn became more and more of an expert on pregnancy. I didn’t feel like being alone in such a journey, and if he knew more about what was going on, I knew he’d both be more excited and more connected to the process. 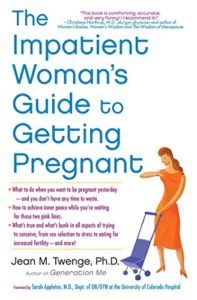 We still haven’t begun the pregnancy journey, but the first text I truly related to was The Impatient Woman’s Guide to Getting Pregnant by Jean Twenge, PhD. While there are many couples who instantly get pregnant when they desire to do so, Twenge acknowledges that there are plenty of ways to up the chances of success early. I like that she acknowledges that women don’t stop having ambitions or stop needing order just because they want to have a child. It was comforting to imagine that it is possible to control the aspects of an inherently-uncontrollable process that were in my hands, and leave the rest up to the mysteries of the womb.

Expecting Better by Emily Oster, Ph.D. The cool voice on this audiobook was especially nice because the whole thing is about bringing science and evidence to many of the hunches that govern the guidelines for pregnancy. If you’ve ever worried about whether the food you like to eat or the drinks you like to drink will harm your unborn child, this book is for you. While she tries to respect women’s desires to be cautious, she also wants women to have the power to make their own choices when needed, and that gave me such a boost in thinking about the whole process. 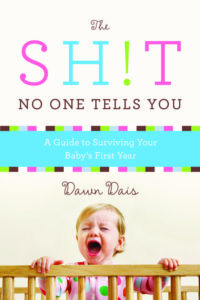 The Shit Nobody Tells You by Dawn Dais was a book that a friend of mine read during her first 6 months of parenting, and I thought that perhaps it was a nice audiobook for me to try, even though I wasn’t in the thick of it in any way. This book uses humor and honesty to acknowledge that the incredibly overwhelming aspects of the first year of parenting an infant are normal. This book seems to take as its method that some complaining and a whole lot of self-affirmation are essential in realizing that children are inherently unpredictable and amazing beings, so feeling underprepared is a pretty universal experience.

There are many, many other pregnancy audiobooks, and I’ve only just scratched the surface. Book Riot’s other lists, including this 100 Must-Reads and these books that tell it like it is, form the bulk of my to-read list for the future, but I think there is something especially helpful when listening to these books (the ones available in audio form!). I don’t yet feel comfortable asking for advice or thoughts about raising children from all the people around me, especially since I am not having a child any time soon, but these books feel like a person a little older and wiser than me sharing her story with me through my earphones. They aren’t judgmental or harsh, but they also don’t make pregnancy or parenting sound easier than it is.

In short, listening to these books makes a hard thing seem more doable, and for that gift, I am definitely grateful.