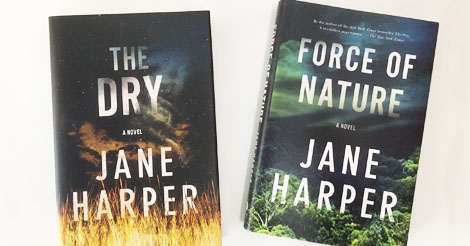 In Previously On we give you a quick reminder of what happened in the previous book in a series, like television shows so helpfully do. ALL THE SPOILERS.

Force of Nature, the sequel in Jane Harper’s Aaron Falk series, is now out in the wild (yay!), but if it’s been a year since you read The Dry you may be pleading with your brain to remember more than it does about what happened. Plead no more, here is a quick rundown on all the major details from The Dry.

LAST WARNING: This is only for people who have read The Dry and want a recap before starting Force of Nature because I give away all the mystery solves!

Aaron Falk, a Federal Agent in Melbourne, got a threatening note saying he’d lied and Luke had lied and he better go to Luke’s funeral. Why the need to threaten? Falk, now 36, hadn’t been back to Kiewarra since him and his father had hightailed out of there in his teens when Falk had been suspected of murder. I know!—this was the “past” mystery storyline: Ellie, a girl in Falk’s group of friends, suspiciously drowned when they were teenagers. Falk and his friend Luke had alibied each other, but they’d lied. At the end of the book Falk finally gets peace of mind that Luke hadn’t been involved, it had been Ellie’s father and cousin who’d been responsible for her death all along.

As for the present events, Falk is kept in Kiewarra working with a local investigator, Raco, trying to figure out if Luke Hadler had in fact murdered his family and then taken his own life. You probably remember that Luke had been a victim himself, but why, and who was responsible? It turns out the entire awful murders had been triggered by Luke’s wife Karen realizing something was wrong with the local school’s grant money, thus triggering Scott Whitlam, the principal, to think he needed to murder them to keep his gambling secret. But Whitlam got tipped that the police had now solved Luke’s murder and there is a search team out looking for him in the bushland (it’s Australia!) behind the school. Falk and Raco find themselves in a version of a shootout, but while they have a gun Whitlam has a lighter and a flask in the driest land imaginable. So if you vaguely remember a tense fiery ending, A+: Raco and Falk end up charging at Whitlam to save everything from going up in flames and all three end up burned but live.

And now you’re ready for Force of Nature. Enjoy!