Today is Robert Cormier’s birthday. Born in 1925, Cormier wrote suspenseful and twisty young adult novels throughout the ’60s, ’70s, ’80s, and ’90s. Even if you don’t know his name, if you were a teenager or preteen during those years, there’s a good chance you heard about or read The Chocolate War, I Am the Cheese, or The Bumblebee Flies Anyway.

I somehow missed out on reading Cormier when I was young, but I was introduced to him in college in the early ’90s. It was one of the most memorable literary experiences of my college years, and his birthday seems like the perfect time to share the story. 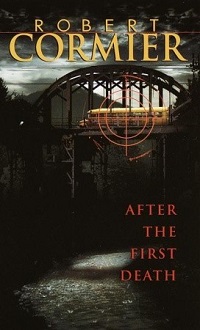 The book was the 1979 thriller After the First Death, assigned reading for my adolescent literature class, a class I took for my teaching certification. It’s a gripping read about a terrorist hijacking of a school bus filled with 5-year-old kids. It’s a terrifying, high-stakes story that you know from the start can’t end well for everyone.

But that’s not the part that stuck with me. The story of the bus is told in the third person in chapters that alternate with the first-person narrative of Ben Marchand and his father, General Mark Marchand. The bus hijacking took place near the military base where the Marchands live, and Mark was involved in the plan to save the hostages.

As the book begins, Ben is at school, waiting for a visit from his father, and remembering the day he got shot. Mark also gets space to speak in these chapters, as he worries about seeing his son again and fails to make a connection with him. It’s weird stuff, presented in a dreamlike manner where nothing is fully explained and nothing seemed quite right.

In college, I was assigned to a group that was to lead the class discussion on the book, which meant we had to get a grip on what was happening. Let me tell you, it was a challenge. Here we were, a group of English majors, most of us just a couple of semesters from graduating, and a young adult novel had left us bewildered! We were readers of Shakespeare, Milton, and Nabokov for crying out loud!

It turns out that Nabokov was the key. I’d studied Lolita earlier that semester, and our professor had sent us on a merry hunt for clues that Humbert Humbert wasn’t telling the truth. So I’d learned to read closely, looking for small discrepancies. We took the same approach to After the First Death, looking at all the bits that didn’t make sense and seeing if, together, they added up to anything. And we cracked it! It’s a weird theory, and we couldn’t quite believe it as we were building it, but it fit. (And I’m not going to share it here—that would be spoiling.)

Before this class, I’d developed a snobbery about young adult fiction. It was easy, simplistic, and not worth my time. I might read it as junk food or as preparation for my teaching career, but it wasn’t real. Cormier showed me I was wrong. Young adult fiction can be as elaborate and sophisticated as adult fiction. In this case, the pacing is quicker, the vocabulary simpler, the relationships spelled out a little more than you might find in an adult book. But it’s not lacking in complexity or difficulty.

So thanks for that, Robert Cormier.

Sign up for What's Up In YA? to receive all things young adult literature.
Thank you for signing up! Keep an eye on your inbox.
By signing up you agree to our Terms of Service
#Young Adult Literature#robert cormier