2017, for me, was The Year of the Book. I read 319 books in 2017. Even writing this absurd number feels strange—reading so much in one year seems like a superhuman feat, not something a mere mortal like me could ever achieve. I have never read so many books in one year before, and I doubt I will ever again.

As I reflect on 2017 and set my reading goals for the new year, I’ve been thinking a lot about how much reading I did last year. How did I manage to read so many books? Was it worth it? Should I try to do it again? There were a lot of factors in my personal life that allowed me more reading time than I’ve had in recent years—I sold a business, took some time off, and started a much less demanding job. I also kept a reading spreadsheet, set reading goals, and started a reading journal. I intended to read more in 2017 than I ever had before.

But when I took a close look at my reading spreadsheet, it immediately became clear that the reason I read so many books last year wasn’t because I had more time to read (even though I did), or because I set out to read more (even though I did). I read so many books in 2017 because I allowed myself to read broadly. I gave myself permission to read all sorts of books I wouldn’t have considered three years ago.

I used to read contemporary literary fiction almost exclusively, with some science fiction, fantasy, and the occasional memoir thrown in to mix it up. Friends kept telling me to try audiobooks; I ignored them. I assumed romance would be a boring, cliched waste of time. Picking up a YA novel never occurred to me. In short, I used to be a major book snob.

Then, last year, I finally realized that all my pronouncements of “but I don’t read that kind of book!” were seriously limiting my enjoyment of reading. I decided to try something new: read indiscriminately across all formats and genres. My one requirement for reading a book became: is this experience pleasurable/moving/illuminating?

What a revelation! I learned that romance novels are not cliched and boring, and that they provide comfort and escape when I need it the way no other books can. I became flat-out obsessed with audiobooks. I discovered comics, and fell in love, hard. Reading so much was mostly a side effect of the thing that really made 2017 the best year of my reading life: daring to try so many books I had previously considered “not my type”.

In this context, that ridiculous number—319—makes a lot more sense. In 2016, I read 102 books. I did not listen to a single audiobook. I did not read any comics or any YA novels. I only started reading romance in late December. In 2017, I listened to 77 audiobooks. I read 75 comics, 55 romance novels, and 31 YA books. Subtract all of that from 319 and you get something more reasonable: 81. 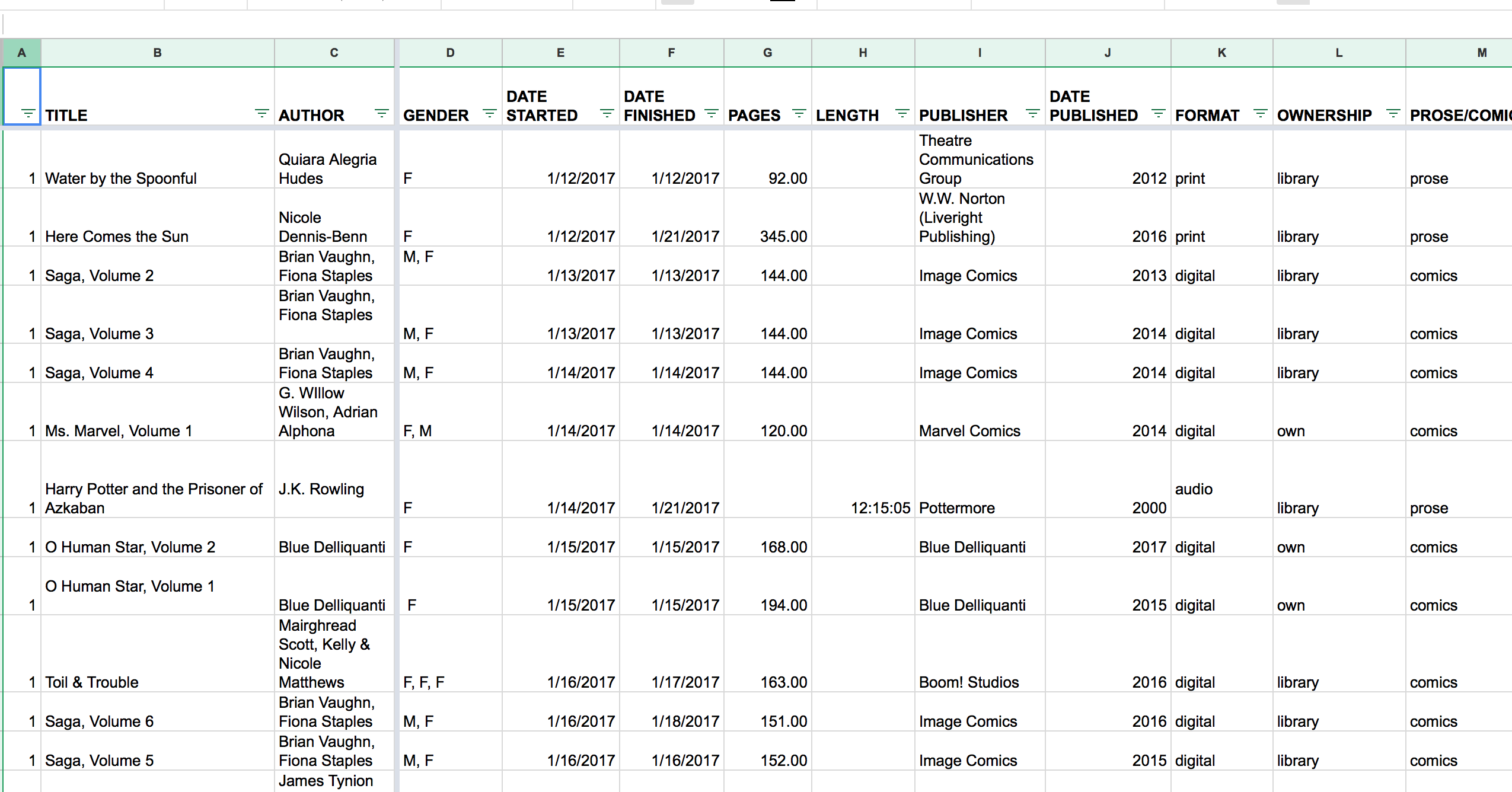 A screenshot of part of my 2017 reading spreadsheet—lots of comics!

I read so much because in 2017 because I fell in love with several kinds of books that I read quickly. It wasn’t because I hid on my couch and did not speak to other humans. It was because I was listening to audiobooks while cooking, driving, and walking the dog. It was because comic books are often short, one-sitting reads. It was because I can devour romance novels much faster than I can read a 400 page work of literary fiction. Last year, on average, it took me 2.5 days to read a romance novel and 3 days to read a comic book. These statistics help quantify the most important takeaway from my year of over-reading: the freedom to read whatever I want is much more important to me than how many books I actually read.

I don’t know how many books I’ll read in 2018. I’m trying to slow down and take more time to savor hard books, but I know I’ll still tear through a lot of pages. I can’t pretend that reading over 300 books in a year isn’t an accomplishment I’m proud of. So I set my 2018 Goodreads goal at 200, and it’s even odds whether I’ll surpass that goal or not make it. It doesn’t matter to me either way. What matters is that 2018 is going to be full of books as different from each other as the humans that write them. I’m going to listen to incredible audiobooks, and read beautiful fluffy romance and dig into massive classics. I’m going to read piles of comics, and gorgeous literary novels, and children’s books, and challenging nonfiction, and funny YA, and, and, AND…