This is a guest post from Alexis Daria. Alexis is a contemporary romance author, artist, and native New Yorker. Her debut, TAKE THE LEAD, was a 2017 Golden Heart® finalist and was named one of The Washington Post’s 5 Best Romances of 2017. DANCE WITH ME, book 2 in the Dance Off series, is out now. She loves social media, and you can find her live-tweeting her favorite TV shows at @alexisdaria, or talking about writing and books on her blog at alexisdaria.com. Follow her on Twitter @alexisdaria.

For writers and creatives, inspiration can pop up anywhere. It’s partly why authors are told to read widely—filling our brains with stories begets more stories. When I’m burned out on writing, I turn to books, movies, binge-watching TV shows, and even stuff like crocheting, walking tours, and museum visits to get the creative juices flowing again. For the most part, I’ve set aside my TV obsession to focus more on writing, with a few exceptions. Dancing with the Stars is one of my not-so-guilty pleasures, and I had no idea it would inspire a whole series of books.

I started watching Dancing with the Stars during Season 8, which aired in the spring of 2009. My cousin was a fan, and since she was visiting me when the season premiered, we watched it together. I’d heard of the show before that, of course, but I thought I wouldn’t like it. (I was so wrong.) In Season 8, gold-medal winning Olympic gymnast Shawn Johnson, French actor Gilles Marini, and Bachelor winner Melissa Rycroft made up the top three. Shawn, paired with longtime pro Mark Ballas, took home the Mirrorball Trophy. After watching the premiere with my cousin, I was hooked. I watched the rest of that season, and most of them since. 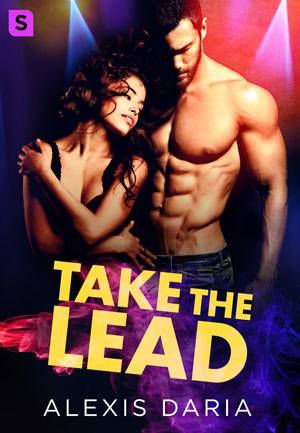 This year I published the first two books in a contemporary romance series where the characters work on a show called The Dance Off, similar to DWTS. In the first book, Take the Lead, the heroine is a pro dancer who falls for her celebrity partner, a survivalist from a reality TV show set in Alaska. The second, Dance with Me, takes place during the off season, and follows another dancer who falls for one of the show’s judges.

It didn’t occur to me on my own that I should write a story inspired by Dancing with the Stars. My original plan was to write scenes or short stories inspired by some of the dance numbers. At the same time, I wanted to read some survivalist romances, because I didn’t think I could write them myself. (I can count the number of times I’ve been camping on one hand, and none of those experiences really count as “roughing it.”) While chatting on Twitter with Sasha Devlin (author of Beary Christmas, Baby) about having too many ideas, she suggested I combine them. And thus, the idea for Take the Lead was born.

I had a blast plotting Take the Lead. Developing a full cast of characters and an episode list was a ton of fun, and indulged the organizational side of my creative process. I got to design the dances and the strategy the main characters used, and all the behind the scenes drama. At first, I thought it would be a standalone book, which in hindsight, was naive of me. There are too many characters for this not to be a series, and I’m not done yet with The Dance Off world.

One last note about guilty pleasures. If something brings you pleasure and isn’t hurting anyone else, why feel guilty about it? Don’t discount the things you love and enjoy. Don’t discount your bonkers ideas. The things you love can inspire you creatively, and your creative community can help you bring those ideas from essence into form. If you’re open to it, inspiration is everywhere. Even on reality TV.