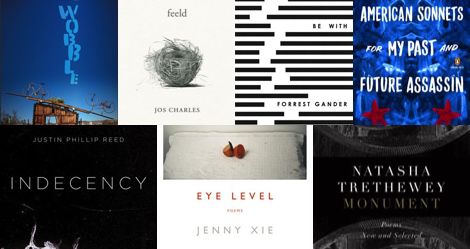 The national book foundation just released its longlist for the 2018 National Book Award for poetry. The 2018 poetry longlist includes both household names and new contenders with books from Big Five publishers and perennial favorite small presses. With a judging panel made up of beloved poets, like Mary Jo Bang and Danez Smith, the picks for this year’s National Book Award for Poetry are sure to inspire. If you haven’t read them already, they should all go on your TBR list.

Armantrout is no stranger to prizes. Her poetry has already won the Pulitzer Prize. Now this could be her year for the NBA. Wobble is both playful and foreboding, calling on and calling out the wasteland that could have been the American Dream.

In feeld, Charles illuminates the nuances of the trans experience by creating a linguistic conversation with the past. With language that feels Chaucerian but is wholly her own, Charles calls the reader to look at powerful ideas that usually remain hidden.

Be With by Forrest Gander:

Gander weaves many languages and experiences in these poems that draw on his background as a translator. With some poems like hymns and others like cultural meditations, this collection is eclectic, personal, and timely. 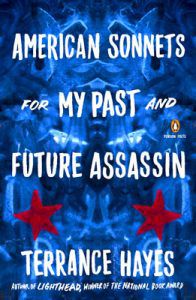 American Sonnets for My Past and Future Assassin by Terrance Hayes:

This collection by Hayes is definitely of the moment. With poems exploring the meaning of the words American and assassin, Hayes comments on the time when these poems were written, the first 200 days of the Trump presidency.

Museum of the Americas by J. Michael Martinez

Martinez engages in ekphrasis—i.e. describing and commenting on art—in this hybrid collection that comments on the racialized experience of the body in the Americas. A valuable collection that is personal, political, and historical at the same time, Museum of the Americas deserves to be heard.

Ghost of by Diana Khoi Nguyen

Ghost of is a haunting, otherworldly collection that uses photographs as a touchstone to reach forward into the future and back into the past. A commentary on history and family, Nguyen captures what is left behind by death.

Injustice and inequality are on the chopping block in Reed’s collection. With incredibly timely themes like white supremacy, toxic masculinity, and the prison industrial complex, Indecency accesses and critiques out volatile modern world.

Decolonization is at the front of Rivera’s argument in lo terciario / the tertiary, which was originally written as a response to the Puerto Rico Oversight, Management, and Economic Stability Act. Another very political contender, this book brings queerness and Marxism into the fray as well. 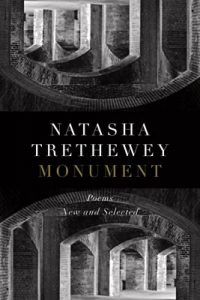 A former poet laureate of the United States, Trethewey is back with a multifaceted collection that speaks to the problems of cultural erasure and white supremacy. Drawing on art and events from the past and present, Trethewey weaves her own history with the resilience of the most downtrodden.

In this remarkable debut collection, Xie embraces departure. With locales ranging from Asia, Europe, and the U.S., these poems bring the longing of travel to all of the reader’s senses.

With so many phenomenal books of poetry contending for the 2018 National Book Award for poetry, it’s going to be a tight race. Look for finalists to be announced on October 10, with the winner named on November 14. Which do you think will win?