I am a Neil Gaiman superfan. I have been collecting his work since I first read my now-totally-beat-up (but also signed!) trade paperback of Neverwhere back in middle school with my Harry-Potter-turned-fantasy book club. I’ve been obsessed with his hopeful, visually fantastic, dark, and vibrant novels ever since.

This is a set of book recommendations for which Neil Gaiman adult-level novels you should buy, which you should borrow, and which you can bypass (skip over). Spoiler alert, though: I’m a Neil Gaiman super-fan. So as critical as I tried to be, I will not recommend any of these novels as a Bypass. But I explained my reasoning for each novel, which will hopefully help you decide which of these novels is perfect for you. Enjoy! 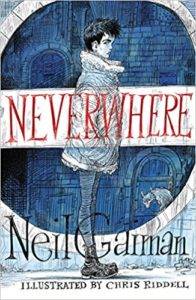 This is my favorite Neil Gaiman book in all the land. Richard Mayhew is an exceedingly normal man who is also kind. One day, he helps a young girl named Door he finds bleeding on the street. That one act of kindness transforms his life irrevocably, and he is dragged into a world that exists in, around, below, within the London Underground, populated with angels, vampires, and a bridge that will give you nightmares.

What makes this novel my favorite is the way that Richard Mayhew really isn’t a hero. This isn’t one of those Chosen One stories—Richard is terrified by the world he encounters, and really just wants to go home. But he is kind, and that’s what got him to this place, and his kindness is what defines his character. It’s a book of fun characters and poignant moments. I recommend the version that came out recently that includes illustrations by Chris Riddell.

Shadow Moon is released from jail a few days early—yay!—with the heartbreaking news that his wife has died—bummer. On the plane ride home he meets a man named Mr. Wednesday, who wants Shadow to work for him. It’s fair to say that Shadow doesn’t know just what he’s getting into when he says yes and is embroiled in a world of gods, goddesses, fables, and entities, all of whom were brought to America long ago, and all of whom have a strange interest in Shadow’s fate.

"I think I would rather be a man than a god. We don’t need anyone to believe in us. We just keep going anyhow. It’s what we do." ⚡️⚡️⚡️

This novel is not for everyone. I believe you should buy this book, but I’ve given it to a lot of people in the past, and many really struggle with it, from the drifting structure to the length of the thing. I love it all, front to back, but Neil Gaiman himself once said that American Gods is a book that people either love or hate. So I would recommend you borrow this one and see if you’re a fan before you invest.

(Also, if you were wondering: Yes, I adore the TV adaptation.) 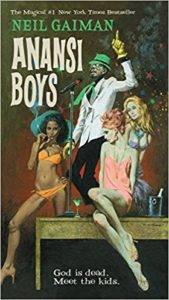 Fat Charlie Nancy’s life was rather acceptable—very normal, and very average. At least until his father dropped dead on a Florida stage, and until his brother Spider decided to show up, making Fat Charlie’s life, to his distress, significantly more interesting.

This is probably the most underestimated, under-appreciated of Neil Gaiman’s novels, and a lot of people would even label this as a Bypass. But I have to disagree—for a long time, I considered this my favorite Gaiman novel. It moves from the breadth and huge scope of American Gods into the smaller family of Anansi—this book is often mislabeled as American Gods #2, when actually this is more of a spin-off than a sequel. Because I recommended you borrow American Gods, I’ll also recommend you borrow this one, but if the breadth of the first is what bothered you, I urge you to still give this one a try.

I’ll close with one of my favorite book quotes of all time, which is from this book: “Each person who ever was or is or will be has a song. It isn’t a song that anybody else wrote. It has its own melody, it has its own words. Very few people get to sing their song. Most of us fear that we cannot do it justice with our voices, or that our words are too foolish or too honest, or too odd. So people live their song instead.” 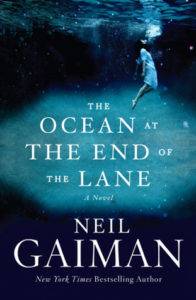 This book began as a short story written to Amanda Palmer about Neil Gaiman’s childhood, and expanded into a breathtaking novel about childhood, friendship, and memory. After his father’s funeral, our narrator is drawn to the farm at the end of the lane where he grew up. As he sits next to its pond, his friendship with Lettie Hempstock—a young girl who may be much older than she appears—and the terrifying things they once faced, all rushes back.

This novel digs deep into what frightens us as children while really being about what frightens us as adults. Children experience a world all their own, and no writer is able to access it quite as well as Neil Gaiman. The world of childhood is dark, because there is so much that we can access that is unexplained, and so much that we can imagine that as adults, we perhaps choose to forget. This book will take you back into the days you believed in monsters, and it will make you wonder if you were right about them being real all along. 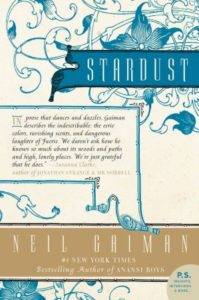 Stardust is Neil Gaiman’s fairytale fantasy. Romantic and a bit more sparkly than most of Gaiman’s fantasy, this book features Tristran Thorn, who sets out into a fantasy realm to retrieve a fallen star so that his unrequited true love, the gorgeous Victoria, will marry him. But when he arrives he is surprised to find not a sparkling star still ablaze, nor a meteoric rock, but a young woman named Yvaine who hurt her ankle in the fall. The novel includes pirates who catch and sell lightning, snowdrops that bestow protection, and a jewel that will give the kingship to its rightful heir.

Stardust is inspired by classic fantasy but adds a twist of darkness and vibrance. It has a true romance tale that’s anything but stereotypical or fluffy—its closest parallel in my mind would be The Princess Bride, which, yes, is a high order to match. It challenges the traditional concept of fairytale romance while also raising love to the level of the stars, having a fantastic sense of humor, and resisting predictability at every turn. It also holds the proud honor of being one of the best-ever book-to-movie adaptations out there. I recommend you buy the book so that you can read it before watching the movie with your friends, a good glass of wine, and a bucket of popcorn.

Do you agree or disagree with my verdicts? Leave your thoughts in the comments.