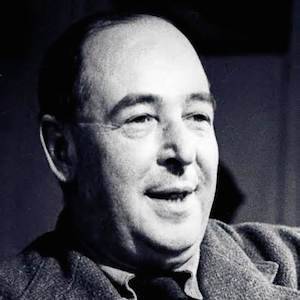 The C.S. Lewis Trail in Belfast, Northern Ireland, is a self-guided walk taking fans of this literary giant through his childhood haunts and exhibitions on his life. For Lewis-themed tourism, most people head to Oxford, England, but the man who brought us The Chronicles of Narnia and countless Christian apologetic works is actually an Irishman by birth. Clive Staples Lewis was born in east Belfast on November 29, 1898, in what is now Northern Ireland.

Though a self-proclaimed Lewis fan, I didn’t know this until I studied abroad at Queen’s University Belfast in the fall of 2014. With the help of the Connswater Greenway C.S. Lewis Trail map, my QUB library card, and some internet research, I tracked down the top Lewis spots in Belfast during the annual C.S. Lewis Festival that November. From his birthplace, to his childhood home, to the numerous Lewis memorials around the city.

To help you on your own literary explorations in Belfast, I’ve compiled this detailed guide and a Google map itinerary of the top spots on and off the official C.S. Lewis Trail in Belfast. Hop on bus lines 3 or 4 from the city centre and tell the driver you’d like to stop at the Holywood Arches Library. 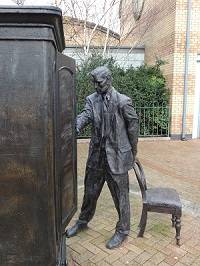 The first stop on the C.S. Lewis Trail in Belfast is this statue of Lewis, unveiled on his 100th birthday in 1998. This work by Northern Irish artist Ross Wilson depicts Lewis as his character Professor Digory Kirke entering the wardrobe portal to Narnia.

The back of the wardrobe features a lion’s head and a letter Lewis wrote to 10-year-old Anne Jenkins in 1961. In it, he explains how the Narnia series can be read as an allegory for Christianity. Fun fact: Jenkins attended the statue’s 1998 unveiling. 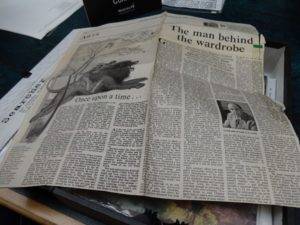 When I visited during the 2014 C.S. Lewis Festival, the librarians presented me with a map of the C.S. Lewis Trail and a bookmark featuring “The Searcher.” They also let my friends and me peruse their archives of newspaper clippings about Lewis.

One was a story about Conor Anderson, whose family was living in Lewis’ childhood home. At age 11, Conor was selected to read part of The Lion, the Witch, and the Wardrobe in the BBC Radio Ulster serial. 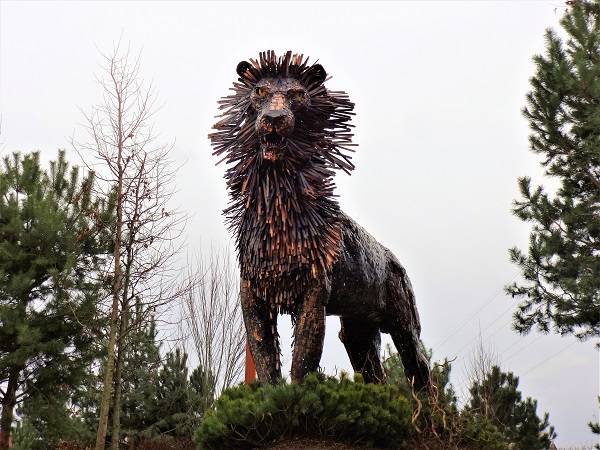 The square opened on November 22, 2016, making it the newest spot on the C.S. Lewis Trail in Belfast. It’s a community space dedicated to Lewis and featuring sculptures of his characters by Irish artist Maurice Harron. 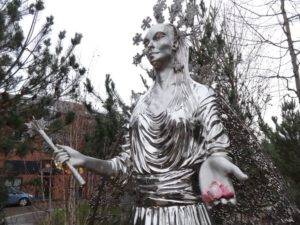 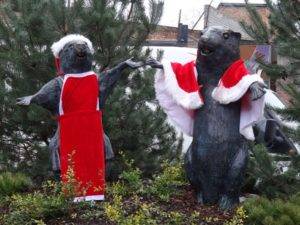 I was lucky enough to visit Belfast again last winter just after this opened; I followed the path from “The Searcher” and met Mr. and Mrs. Beaver, Mr. Tumnus, and Aslan himself, along with a few of the series’ villains. The artist used different sculptural styles for different characters, but I noticed that he used the same style for Aslan and Maugrim, chief of the White Witch’s secret police. I suppose this makes sense—as true Narnia fans know, “He is not a tame lion.”

There are two Lewis-inspired cafes near the square. JACK Coffee Bar–named after the author’s nickname–is inside the EastSide Visitor Centre, which also features an exhibit on East-side history. The Lamppost Café is a small, cozy café just down the street. Lewis himself famously said, “You can never get a cup of tea large enough or a book long enough to suit me,” so take some time for a cuppa at either of these two spots. 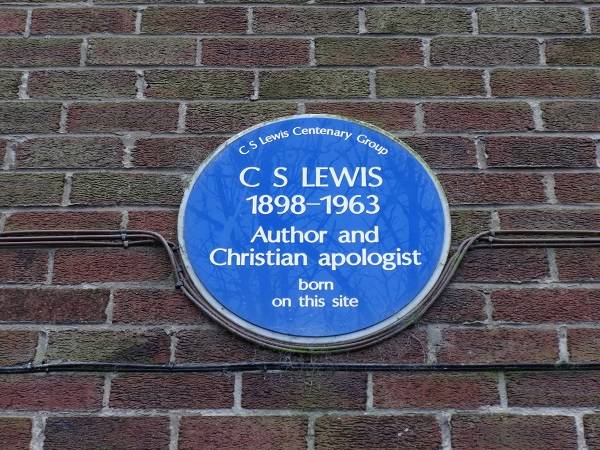 While the original building no longer stands, a blue plaque marks the spot of Lewis’ birth. 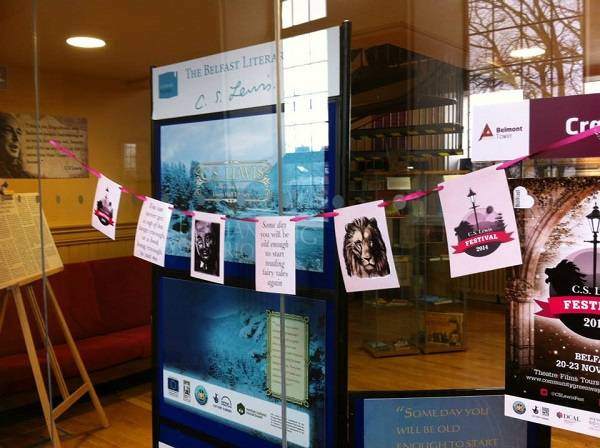 The historic Belmont Tower is located in the heart of the neighborhood Lewis grew up in. It houses a Lewis exhibition displaying first editions of the Narnia books, some of his letters, and copies of his academic work from The Inklings, the literary group he co-founded with J.R.R. Tolkien while at Oxford.

The walls are peppered with quotes, including this one that shows how Lewis felt about his neighbors: “I think we Strandtown and Belmont people had among us as much kindness, wit, beauty, and taste as any circle of the same size I have ever known.” 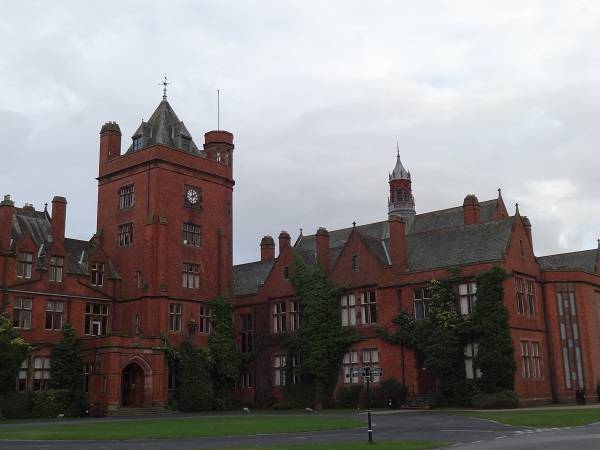 Lewis spent one semester at Campbell College in 1910 before dropping out due to ill health. While he was not there long, an old-fashioned gas lamp on the driveway is said to be the inspiration for the lamppost in Narnia. Lewis’ name can also be found on the College War Memorial, which is dedicated to pupils who served in World War I. 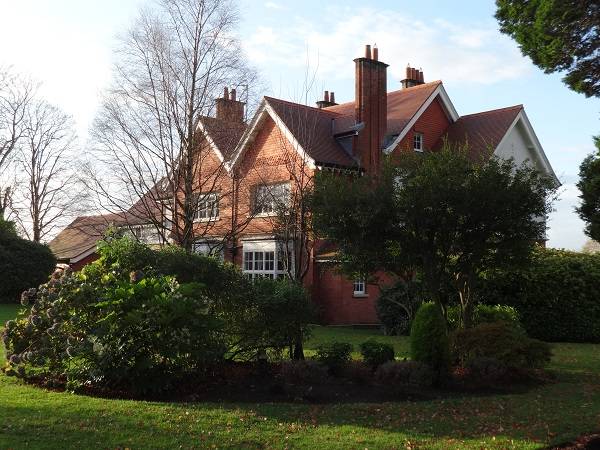 Lewis’ family moved to 76 Circular Road in the Strandtown neighborhood in 1905. In the home, dubbed “Little Lea,” Lewis wrote and illustrated his earliest stories in the fictional world Boxen alongside his brother Warren. Lewis says in Surprised by Joy that the house was “almost a major character in my story. I am a product of long corridors, empty sunlit rooms, upstairs indoor silences, attics explored in solitude, distant noises of gurgling cisterns and pipes, and the noise of wind under the tiles. Also of endless books.” Lewis’ father had an extensive library in Little Lea.

Unfortunately, this home is now a private residence. The front gate is marked “Little Lea,” though, and if you peek over the fence you can see the commemorative blue plaque stating: “C.S. Lewis – author and critic – lived here 1905-1917.” 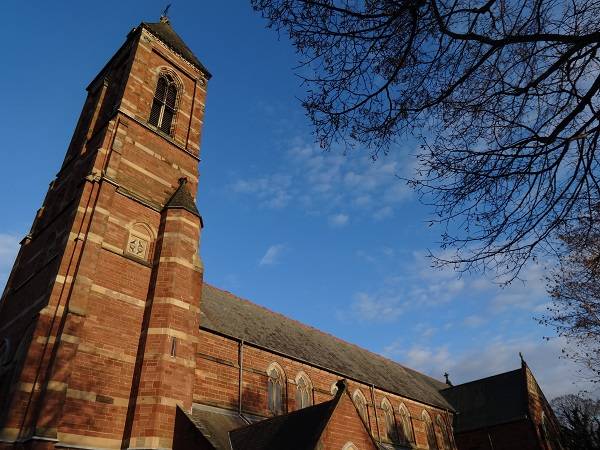 C.S. Lewis was baptized in St. Mark’s Church, known locally as “The Lion on the Hill.” Lewis’ grandfather worked as a rector here. Anytime Lewis visited him, he would have stared right into the lion-shaped door handle leading to the rector’s office.

The Lion Doorknob at St. Mark’s

While Lewis denounced his faith in his teen years, he returned to Christianity in 1931. A few years later, he and his brother donated a set of three stained glass windows to St. Mark’s as a memorial to their parents. 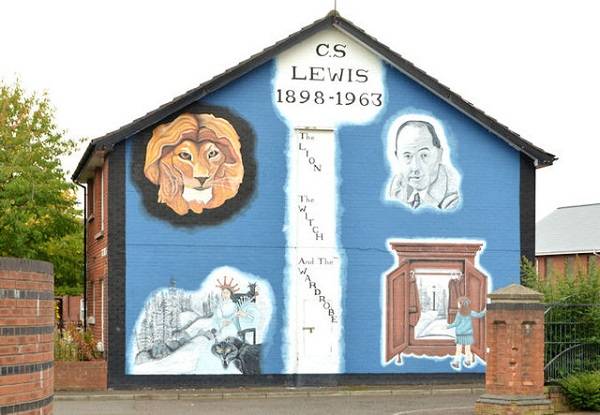 Image courtesy of Albert Bridge (licensed for reuse under a creative commons license).

While the Narnia-themed murals are mentioned on the C.S. Lewis Trail map, the exact addresses aren’t listed. Belfast murals can be hard to track down because they’re painted on the sides of buildings and walls in the middle of residential neighborhoods. Without taking a Black Cab Taxi tour, you’ll have to hunt them down on foot.

The Narnia mural is located by 5 Pansy St., just off of Dee St. The C.S. Lewis mural is located at approximately 30 Convention Court in east Belfast, just off where Ballymacarrett Rd. becomes Island St. Once you’ve found these, walk down to Newtownards Road and catch a bus back to the city centre.

The C.S. Lewis Association of Ireland donated a set of works by and about Lewis to the library in 2004. Lewis was a childhood friend of Arthur Greeves, who went on to become president of the Linen Hall Library. The library occasionally hosts an exhibit on this friendship and more called “C.S. Lewis: Through the Wardrobe.” It’s open this year as part of the C.S. Lewis Festival until November 30. 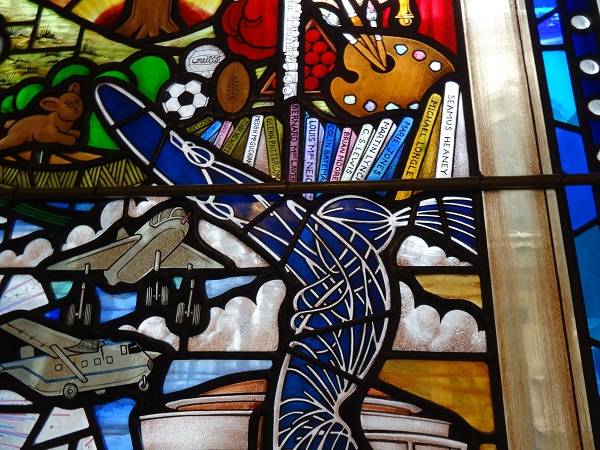 This impressive building houses one tiny nod to Lewis (and the city’s immense literary heritage), too small to be on the official trail. However, if you’re already in the neighborhood, the building itself is worth a stop. While you’re inside, turn left down the front hall to see a stained glass window featuring a shelf of Northern Irish authors, including Seamus Heaney and C.S. Lewis. 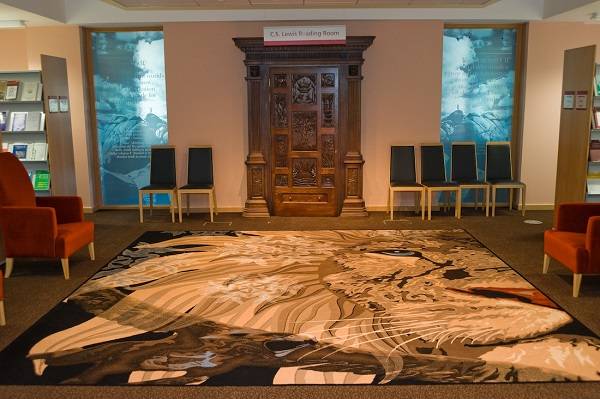 This stop is off the official C.S. Lewis Trail in Belfast, but it’s a must nonetheless. Take any 8 bus down to Queen’s University Belfast and visit the McClay Library. The library is for students only, but tell the clerks you want to visit the C.S. Lewis Reading Room, and they’ll let direct you to the first floor. A giant lion rug carpets the floor outside the wardrobe door entrance. 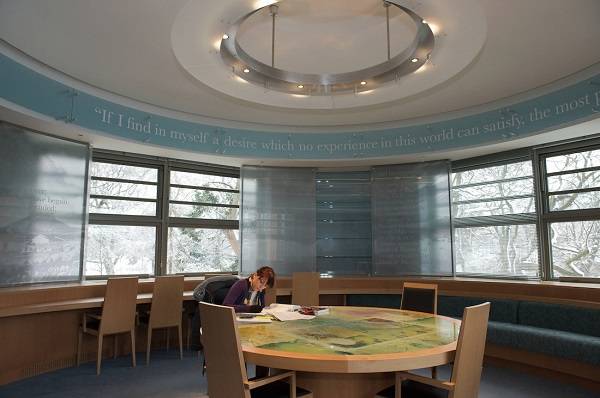 Inside, the room features a round table with a map of Narnia, displays of Lewis’ books, and quotes engraved on glass. You can also people watch as students hustle about between the library, the students’ union, and the Hogwarts-like Lanyon Building. And since you’re already in the Queen’s Quarter, pop around the corner to Maggie Mays for a pint-sized milkshake or an Ulster Fry. (I still get cravings.) 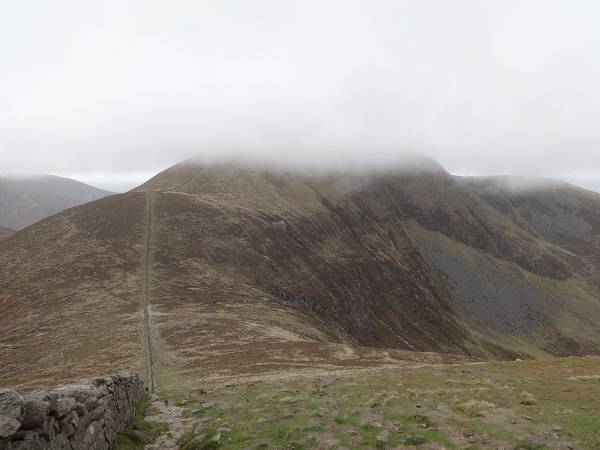 In his essay “On Stories,” Lewis writes, “I have seen landscapes, notably in the Mourne Mountains and southwards which under a particular light made me feel that at any moment a giant might raise his head over the next ridge.” To experience this same sense of the fantastical, head south to the Mourne Mountains. I can attest to the magic of the experience–the day I hiked up Slieve Donard with friends, I saw a half-buried formation of rocks that I believed, for all of five seconds, to be the remains of a giant. Perhaps the particular light Lewis spoke of was the same dim, gray mist that hung over the mountain the day I visited, soft and gentle in its foreboding ambiance.

The librarians at the Holywood Arches Library told me they didn’t think people in Belfast gave enough consideration to C.S. Lewis. He is often disassociated with his homeland, far more likely to be associated with England. He himself did have mixed feelings about his native land. A Lewis quote I found in the Holywood Arches archive says: “I am crossing over to Ireland: my birthplace and dearest refuge although most dreadful because of the strife, hatred and often civil war between dissenting faiths.”

Lewis lived through Ireland’s split in 1921, and the conflict both before and after. Biographer A.N. Wilson speculates that Lewis’ ecumenical approach to Christianity may have arisen from his disdain for the sectarian conflict of his homeland. Lewis died in 1963, however, before “The Troubles,” when the sectarian conflict became worse than it had ever been. To learn more about this time, check out Aisling’s list of books about the Troubles in Northern Ireland.

Now that things are peaceful, however, there’s never been a better time to visit. Since 2013, the city has hosted an annual C.S. Lewis Festival every November. This, along with the recent addition of the C.S. Lewis Square, show a renewed interest in celebrating one of Belfast’s great literary sons.

Want more Lewis? Check out Kate’s introduction to C.S. Lewis’ major works, these five books about C.S. Lewis’ life and work, and Amanda’s round-up of Lewis links around the web. For Lewis fans stuck in America, check out Christy’s post on the Lewis memorabilia in the Wade Center outside of Chicago.