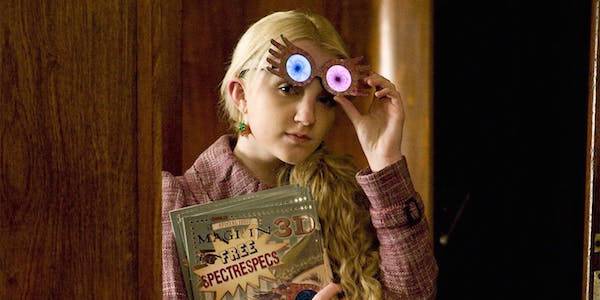 I first took the Pottermore Sorting Hat quiz a few years ago. And at first, I was delighted to find out I got Ravenclaw. I mean, they’re smart, thoughtful, inquisitive, and more importantly, know the value of a good book.

But I realized I had never truly identified with that House in all my years reading the Harry Potter books or watching the Warner Bros. movies. Maybe it’s because J.K. Rowling didn’t develop many Ravenclaw characters, at least compared to the Gryffindors and Slytherins, or even Hufflepuffs for that matter.

But I think it was because that, although I’ve always been a pretty nerdy person who loves reading and writing and all that good stuff, there was something missing in the overall Ravenclaw aesthetic; something that I could really, truly identify with.

And then I remembered: Luna Lovegood.

To me, she embodies the true essence of a Ravenclaw…or, at least, of some Ravenclaws, like myself.

See, at first, it doesn’t really make sense she was sorted into the house best known for studiousness and skepticism. Whereas Ravenclaws love to be grounded in logic, facts, and the real-world (well, as “real” as the Wizarding World is), Luna spends her time hunting Nargles and Wrackspurts or  reading conspiracy theories in the Quibbler. She’s seen as a bit absent-minded, is easily distracted, and is extremely eccentric in both her disposition and general outward appearance.

But that’s what makes her a perfect Ravenclaw. She loves learning, but unlike many of her housemates (or Hermione, for that matter), she can never know enough. Her curiosity for understanding the world isn’t sated just because she reads something in a book. Luna is always looking for new truths about the world, new secrets to uncover. Sure, not every Blibbering Humdinger will turn out to be real, but that doesn’t stop her from leaving no stone unturned, no belief unchallenged, and no conspiracy theory, however untenable or unrealistic, unscrutinized.

Category ID: 13193
Category ID: 4284
Category ID: 468
What’s Up in YA? Newsletter
Sign up for What's Up In YA? to receive all things young adult literature.
Thank you for signing up! Keep an eye on your inbox.
By signing up you agree to our terms of use

This is why I identify with her so much. Like I said, I’m a big ol’ book nerd, and as such, I spent most of my school days reading classic literature. But sometimes it was too…conventional. Books from certain genres like Hemingway-style post-war modernism or Austen-like novels of manners became predictable after a while. My natural curiosity to know and learn more drove me to seek out the unconventional, so I got into the magic realism of Isabel Allende, the fabulist short stories of Helen Oyeyemi and Angela Carter, and the surreal dreamscapes of Haruki Murakami and Samuel R. Delany.

And I enjoy reading books that a lot of Ravenclaws may not classify as “smart” reading. I love reading ridiculously silly stuff like Ryan North’s work on Squirrel Girl. I also enjoy intense crime thrillers like Natsuo Kirino’s Out. I may even enjoy some fan-fiction now and then, who’s to say?

The point is that I think Luna embodies the very best characteristics of Ravenclaws: she’s inquisitive, never satisfied with just a little bit of knowledge, and she’s drawn to mysteries and the unknown. Plus, she’s smart enough to know society’s definitions of what is “normal” are complete crap, so she doesn’t let anyone but herself dictate what she needs to wear or how she needs to act.

Basically, the more she has learned about the world around her, the more she is freed to do what she wants and be who she wants to be. Knowledge is power, is what I’m saying. Or, put a better way:

“Wit beyond measure is man’s [and woman’s and everyone’s] greatest treasure.“