The date of November 8th now has several strong associations with it. I am choosing to focus on the positive: the civic engagement bonfire that was lit last fall after November 8th. In particular, the nonviolent protests we’ve been seeing on the streets, on TV, and on Twitter.

Yet the 20th Century was full of amazing nonviolent protest, with Gandhi’s push for an independent India, the American Civil Rights Movement, the Tiananmen Square protests, and The Baltic Singing Revolution as only a few examples.

Here is a list of books to get you started on the history and the practice of nonviolence. Maybe you’ll find your feet on the pavement the next time five million women across the globe need to march. Or scientists, or working people, or supporters of black life, or defending Native land rights, or fighting religious intolerance, etc.

This Is An Uprising: How Nonviolent Revolt is Shaping the 21st Century by Mark Engler and Paul Engler

“From protests around climate change and immigrant rights, to Occupy, the Arab Spring, and #BlackLivesMatter, a new generation is unleashing strategic nonviolent action to shape public debate and force political change. Nonviolence is usually seen simply as a philosophy or moral code. This Is an Uprising shows how it can instead be deployed as a method of political conflict, disruption, and escalation. It argues that if we are always taken by surprise by dramatic outbreaks of revolt, we pass up the chance to truly understand how social transformation happens.” 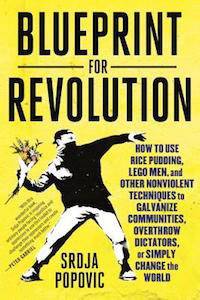 Blueprint for Revolution: How to Use Rice Pudding, Lego Men, and Other Nonviolent Techniques to Galvanize Communities, Overthrow Dictators, or Simply Change the World by Srdja Popovic and Matthew Miller

“A handbook for anyone who wants to effectively (and peacefully) improve your neighborhood, make a difference in your community, or change the world.”

Non-Violence in an Aggressive World by A.J. Muste

“The thoughts and methods of Abraham Johannes Muste, a social activist and clergyman integral to the labor movement, the pacifist movement, the anti-war movement, and the Civil Rights Movement.”

An Autobiography: My Experiments with Truth by Mahatma Ghandi

“Mohandas K. Gandhi (Mahatma is a title) is one of the most inspiring figures of our time. In his classic autobiography he recounts the story of his life and how he developed his concept of active nonviolent resistance, which propelled the Indian struggle for independence and countless other nonviolent struggles of the twentieth century.”

Visions of a Better Tomorrow: Howard Thurman’s Pilgrimage to India and the Origins of African American Nonviolence by Quinton Dixie and Peter Eisenstadt

“In 1935, at the height of his powers, Howard Thurman, one of the most influential African American religious thinkers of the 20th century, took a pivotal trip to India and became the first African American to meet with Mahatma Gandhi. The trip left Thurman changed him and ultimately shaped the course of the civil rights movement in the United States.” 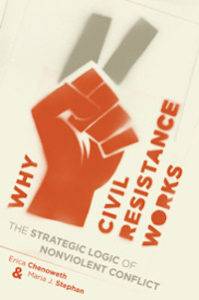 “For more than a century, from 1900 to 2006, campaigns of nonviolent resistance were more than twice as effective as their violent counterparts in achieving their stated goals. Combining statistical analysis with case studies of specific countries and territories, Erica Chenoweth and Maria J. Stephan detail the factors enabling such campaigns to succeed and, sometimes, causing them to fail. They find that nonviolent resistance presents fewer obstacles to moral and physical involvement and commitment, and that higher levels of participation contribute to enhanced resilience, greater opportunities for tactical innovation and civic disruption (and therefore less incentive for a regime to maintain its status quo), and shifts in loyalty among opponents’ erstwhile supporters, including members of the military establishment.”

Nonviolence: The History of a Dangerous Idea by Mark Kurlansky

“‘Nonviolence’ is a sweeping yet concise history that moves from ancient Hindu times to present-day conflicts raging in the Middle East and elsewhere. Kurlansky draws from history twenty-five provocative lessons on the subject that we can use to effect change today. He shows how, time and again, violence is used to suppress nonviolence and its practitioners—Gandhi and Martin Luther King, for example; that the stated deterrence value of standing national armies and huge weapons arsenals is, at best, negligible; and, encouragingly, that much of the hard work necessary to begin a movement to end war is already complete.”