Listen, I loooove Lord of the Rings. I mean, love. I read the books annually for a long time, and I have Fellowship of the Ring pretty much memorized. Like, could recite the extended edition almost word for word through the Council of Elrond memorized. (I know, I didn’t have much of a life in high school. That would also explain my self-insert Legolas fanfiction). I read all the appendices, and The Silmarillion about five times, and for a long time playing LOTR Trivial Pursuit was an annual birthday tradition (finally broken this year, because I decided I like my friends and I shouldn’t torture them).

So when I saw the news that Lord of the Rings is being shopped around for a possible TV series I had two thoughts:

Sean Astin is forever my Samwise Gamgee, and Ian Mckellan is a fantastic Gandalf and why would we redo this? I mean, OFFENSE.

And, wait a second, do we really need ANOTHER epic fantasy series about    a lot of white guys?

So, for real, Samwise Gamgee is Sean Astin to me and I love Ian Mckellan and New Zealand and *sniff*, BUT times change, right? Don’t be one of those nerds, Sonja. People deserve to like what they like, and maybe a new take could be interesting. (Will their Aragorn help a new generation of teenager girls really understand the appeal of rugged manliness and scruffy beards, because DAMN. Hello, puberty). 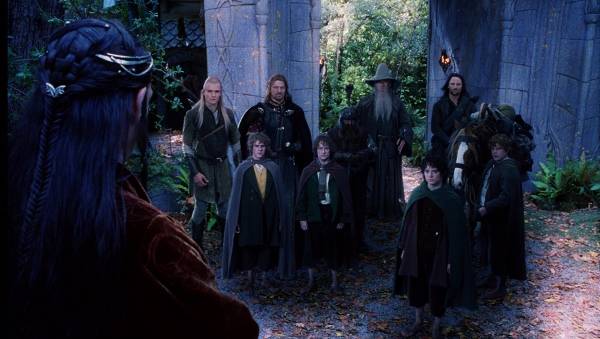 But also, MAN. Look at all those white guys.  That’s not even all of them! So many.

Does fantasy TV (or TV in general) really need more men going on epic quests with a smattering of women and literally not a single person of color except for maybe in the background scene of that one town scene? Do we really need more white dudes being angsty about stuff they may have fucked up while saving the world? Like, we already sat through 10 hours of Frodo’s pain/orgasm face, can we just not? And in today’s world where men are literally making decisions about women’s health, do we need to be more invested in fantasy dudes too? Like, enough.

And I hear you. It could be REALLY cool if they racebent and genderbent and actually made the Legolas/Gimli love story text instead of super obvious subtext.

Friend, my foot. Gimli goes with Legolas to the Undying Lands. COME ON! That is not hey friendo, that’s I love you forever, romantic styles. Come fight me about it. So, yes that would be amazing, but I don’t think that would happen for a lot of reasons, and honestly I think the Tolkien estate would  probably say stuff about that when they sell the rights. If I am wrong, we will throw a very unexpected party. *Snort*.

Also, this is being shopped around for a ton of money (like $200 MILLION BIG), and I for one think we need to be giving less dude authors who write/wrote badly or not really about anyone besides straight men less money and instead, like, I don’t know give that money to women and people of color to tell their own fantastical stories? Because, dude, we have given straight white men a TON of money. Now give me V.E. Schwab’s Darker Shade series, N.K. Jemison‘s Broken Earth, Saladin Ahmed’s Throne of the Crescent Moon, Majorie Liu’s Monstress, Sofia Samatar’s Stranger in Olandria, Kristin Cashore’s Graceling, or Cinda William Chima’s Seven Realms instead. And those are just off the top of my head, and yes, I know there are rumors about some of these, but I am trying to make a point here.

Like I said, I love Lord of the Rings deeply. Come talk to me about Tom Bombadil or how much you love Samwise Gamgee or Eowyn , and I will be your friend, but also, there is a ton of problematic stuff in them and isn’t it time to move on different fantasy worlds? If we are building any kind of world we want, shouldn’t we have more imagination instead of using the same old template?

I’m just saying, I think we’ve had a ton of white guys already, and I am ready for someone else’s story, that isn’t like “Hey, I was a farmer dude and then I got this quest and then I met up with all these other dudes who also have feelings and things, but must hide them under lots of dirt and weaponry.”

I’m so ready for fantasy that doesn’t have to rely on women as sex objects or mainly as romantic partners (And before some smartass says something, yes, I know and love Eowyn, but that is one warrior lady to 100000 men. Not great bob).

Lord of the Rings is awesome, but maybe its time to dream of a bigger, wider world where we don’t pay millions of dollars to watch more white dudes wander around green screens hitting each other with swords.