Do you think civilization is collapsing? Or do you have hope, believing humanity is on the cusp of a new renaissance? Does your attitude towards the future come from science fiction or science fact? Science fiction usually takes one of two paths. Either we’re reading about exciting futures we can’t wait to see, or we’re reading about nightmare futures we hope never to see. 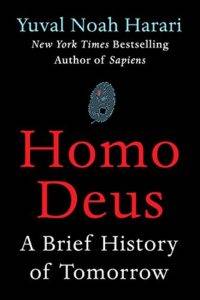 2017 has been a bumper year for science fiction that speculates about the future, what I call nonfiction science fiction. It started off with Homo Deus: A Brief History of Tomorrow by Yuval Noah Harari, the follow-up to his 2014 international bestseller, Sapiens: A Brief History of Mankind. Harari has taken on the job of psychoanalyzing our species, and in his new book speculates on what we might become. Homo Deus is rather down-to-Earth, mostly dealing with current politics, science, history, psychology, and popular culture. It’s not until Harari begins talking about post-humanism that I get worried. Harari’s work is a philosophical summation of our species, and his subtitle is truly accurate, it’s only a brief history of tomorrow, but one where humans are more self-aware of their true nature and limitations. 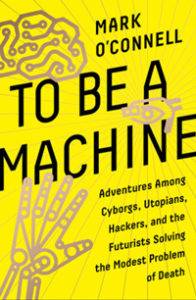 Next up is To Be a Machine: Adventures Among Cyborgs, Utopians, Hackers, and the Futurists Solving the Modest Problem of Death by Mark O’Connell. This nonfiction science fiction book is about transhumanists, a group of true believers raised on science fiction working to make their science fictional dreams come true. They want to extend the average life-span, integrated humans with machines, expand the feature set of Homo sapiens, and ultimately cheat death by copying their souls to computers or clones. At my blog, I annotated this book chapter-by-chapter with links to all the people and organizations O’Connell profiled. This work is fascinating, but I can’t help feeling transhumanists want what religion promised and can’t deliver. I don’t believe faith or science can give us everlasting life. 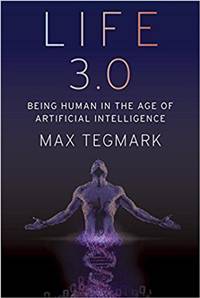 The newest nonfiction science fiction book is Life 3.0 by Max Tegmark. Tegmark is a professor at MIT and co-founder of the Future of Life Institute. He wrote the 2014 book Our Mathematical Universe: My Quest for the Ultimate Nature of Reality which was a philosophical overview of physics, astronomy, and mathematics and an excellent companion to Sapiens. Like Harari, his new book is about the future, but Tegmark is a prophet of artificial intelligence (AI). If Superintelligence (2014) by Nick Bostrom was the nightmare vision of AI, then Life 3.0 is its Pollyanna daydream. Don’t get me wrong, Life 3.0 is brilliant, deep, visionary, hopeful, and astounding. It’s more science fiction than science fiction. I thought To Be A Machine profiled unrealistic dreamers, but Life 3.0 is about practical scientists working towards an even wilder future.

As I’ve gotten older I’ve become skeptical of science fiction. When I was young I wanted everything good science fiction imagined coming true and everything we feared to be conquered by our species’ growing wisdom. Age has shown me our species doesn’t change. What I wanted isn’t possible for Homo sapiens. Yuval Noah Harari knows this and gives a wise assessment of our future. O’Connell profiles people who know this but think they can overcome this knowledge with magical technology. Tegmark knows this and expects humans to be supplanted by a new species, intelligent machines. He also believes AI minds will help us. His dreams could come true, but we will still be Homo sapiens and not Homo superior.

Harari is essentially a philosopher who understands our limitations. O’Connell is a philosophical journalist, skeptical of the visionaries he profiles. He knows they are Dr. Frankenstein tragically striving for immortality. Tegmark understands the larger vision of evolution. Reality constantly is spinning off greater complexity. Life 1.0 is a spinoff of chemistry, which was a spinoff of physics. Life 2.0 is us, and yes we’re amazing, but we’re not the final spinoff. Life 3.0 goes beyond us.

In 1818 Mary Shelley first speculated about how we might overcome death, which makes Frankenstein’s monster the first transhuman. A few decades after Darwin, H. G. Wells imagined humans evolving into two new species in his 1895 novel The Time Machine. In 1911 J. D. Beresford came out with The Hampdenshire Wonder about a human mutation with psychic powers. Then Philip Whylie wrote Gladiator in 1930 that imagined creating superhumans (which probably inspired the creation of Superman in the comics). Also in 1930, British author Olaf Stapledon published Last and First Men: A Story of the Near and Far Future. Stapledon imagines eighteen species of humans evolving over two billion years.

Science fiction keeps wondering about what new species will replace our species. Transhumanists want to make themselves into that next species, but I believe we’ll create Life 3.0 like Tegmark imagines. Most people still hope we can become a better species. Early next year Steven Pinker comes out with his new book, Enlightenment Now: The Case for Reason, Science, Humanism, and Progress. I’m curious why so many writers are speculating about the future of our species. I’m afraid it’s because everyone feels we’re living at the end-of-days.