When talking about a character’s voice, we’re really talking about three voices: the character’s outer voice (dialogue), their internal voice (thought captions), and the author’s voice (the driving force behind all the voices). In order for a character’s voice to ring true, there needs to be consistency between the inner and outer voices while the author drives the voice bus that is writing. If there’s a stronger, more singular voice in superhero comics than Kate Bishop, I sure as hell haven’t heard it. Created by Allan Heinberg and Jim Cheung back in 2005, Kate Bishop has always been a clearly defined character of snark and heart and only been furthered developed under the likes of writers like Matt Fraction and Kieron Gillen. But it’s in her current and first ongoing solo title, Hawkeye, that we get to see Kate at her sarcastic and confident best. Thanks to writer Kelly Thompson, and her perfectly in-sync creative collaborators (artist Leonardo Romero, artist Michael Walsh, colorist Jordie Bellaire, and letterer Joe Sabino) Kate Bishop’s as well defined a superhero can be with a smart and concise cohesion of internal and external voice. She’s good y’all, she’s just too good. 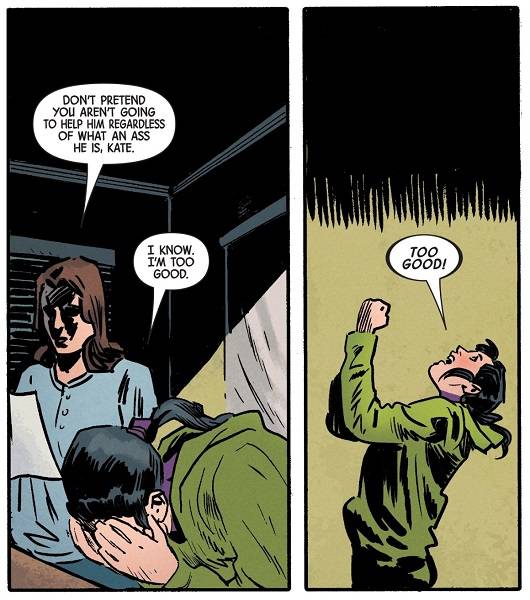 The thing about banter is that it’s usually a cover for a whole mess of emotional insecurities. You see that pretty often with Spider-Man, a wise cracking superhero that’s actually a big blubbery mess of guilt and dead parents and dead uncles and dead girlfriends and dead friends and…yikes, when you type it all out, all those jokes make a lot more sense considering the alternative is just to never ever stop crying. The point is, a character’s outer voice can be used to contrast their inner voice in order to give them more depth. In some writers’ hands, this can come across as jarring more than deftly contrasted. There’s also Deadpool, a character with 50 million comics for some reason, that also basically never shuts up as a means of covering up his incessant need to be liked by both the characters he interacts with and you the reader through some sort of meta fourth wall breaking. Kate Bishop and Kelly Thompson say nuts to all that noise and instead marry the requisite voices into one consistent and fearless hero.

When Kate’s confident on the outside, she’s confident on the inside. When she doubts herself, her speech and demeanor reflect it. When she’s a smartass, it’s not an act to hide insecurity; she’s just a lovable smartass. This isn’t to say that Thompson hasn’t provided Kate with depth, but rather that depth is found through the consistency of Kate’s voice as it presents her many facets sincerely; including her sarcasm. It’s refreshing to see a superhero, and especially welcome to see a female superhero, that’s as sure of herself as Kate is, and Thompson manages to balance Kate’s selflessness and all the jokes with aplomb. It reads effortlessly, as though Kate herself simply told Thompson exactly how to write her and then to get out of the way. As such, Thompson never has Kate betray herself through either her internal or external voice; there are secrets she keeps, of course, as detectives do when they’re working a case, but there’s never a true disconnect or feeling that her actions aren’t justified by her inner thoughts.

Because the comic is a first-person protagonist narrative, we rely on Kate’s inner thoughts to direct us through the story, but it’s all unfolding in real time, so we the reader know only as much as she does in the moment. Obviously, this is a pretty common narrative technique, especially in comics, but Thompson utilizes it exceptionally well by maintaining the consistency of the voices while marrying them to the detective genre. Whereas noir traditionally features a flawed protagonist that seemingly stumbles into a sequence of invents almost unwittingly, Thompson adds the superhero flair of having Kate be the driving force of her cases because Kate is, above all, a hero—as supported through her internal and external voice. 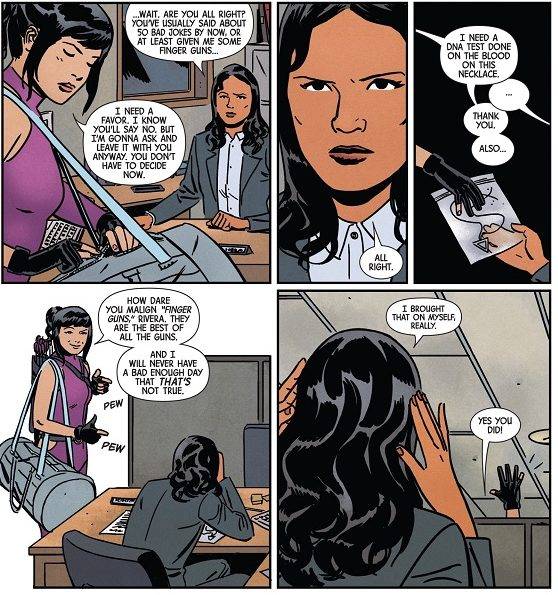 Throughout the series (currently ten issues), Thompson has repeatedly shown that Kate helps others because she truly believes it’s the right thing to do, which sounds simple, but it’s something that’s often lost in a lot of superhero comics that keep pushing towards being direly serious and away from anything that sounds remotely corny. Thompson instead blends that (totally not) corniness of being heroic on principle with a litany of self-aware comments, pop-culture references, and utterly relatable feelings of frustration. Thompson rejects cynicism and instead replaces it with a facetiousness that is far more “are you serious right now?” than it is a nihilistic sense of questioning the traditional trappings of either the superhero or noir genres. There’s an awareness of the tropes in play that’s held in check so as to not delve into that Deadpool style of meta-commentary, but rather embrace them. In doing so, Thompson assures greater believability and thus, a stronger connection to Kate via a voice that rings true in all its permutations. 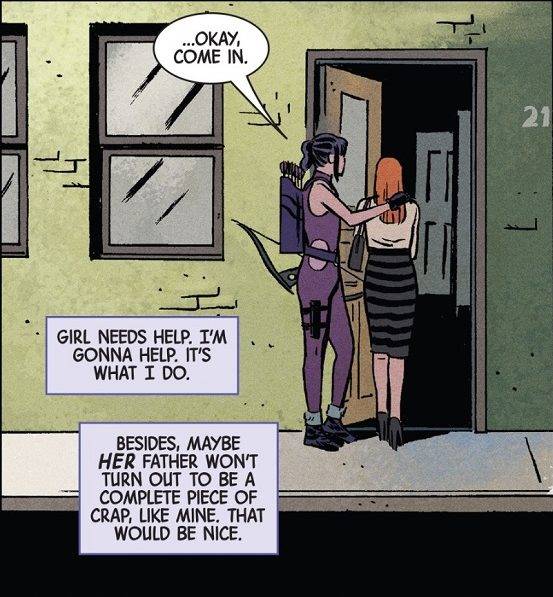 With the current arc, we get to see just how effective Thompson has been writing Kate’s voice, because the latest issue features Madame Masque impersonating our heroine. The reader is left out in the cold as to what’s really going on because the normally ever-present thought captions are nowhere to be found, leaving only the odd behavior and dialogue of “Kate” to show us just how off the character is. Before even reading a word of “Kate’s” dialogue, the absence of those thought captions is our first clue because of how essential Thompson has made them both to the character as well as the experience of reading the character. When we reach the final act of the latest issue, the real Kate is reintroduced in classic Kate fashion and the only way she really could be: via her internal voice. 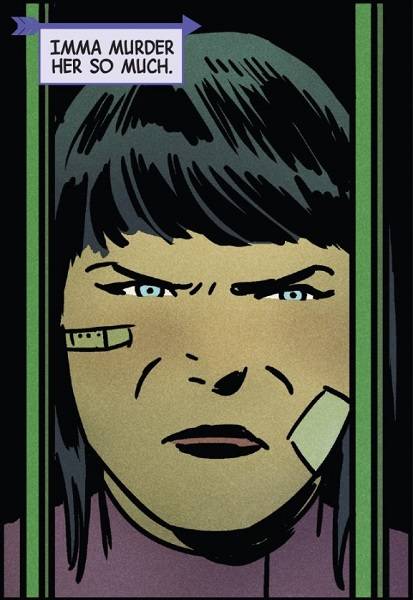 See? That’s the Kate we know and love. Thompson may have taken over a popular character already known for sass and heroism, but she’s now redefined how we interact and understand that character. Clearly, it’s the entire team’s contributions that make it all work; the terrific body language and expressions from Romero and Walsh, the rich textures and clever color theory utilization of Bellaire, and the seamless way dialogue interacts with the art courtesy of Sabino. The sum of all these parts is a fully-realized Kate Bishop, presented with a consistent voice that lets her shine like never before. Thompson isn’t merely preserving a beloved character here, she’s now the defining voice.