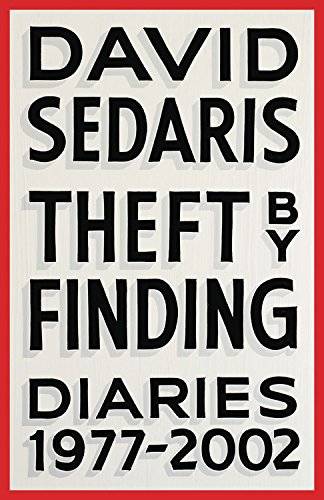 Yesterday, the man across the aisle from me on my evening flight from Cleveland back to New York pointed at my crisp new copy of David Sedaris’ latest release, Theft By Finding.

“Because I went to a reading he did a while ago and it just seemed like random stories.”

At the time, I agreed with him that the book felt “random.” Some entries consisted of only a sentence, while others were meandering descriptions of conversations. Some entries were simple notations of offensive jokes Sedaris had heard from a coworker, or the money he spent that day. In other words, it felt like an actual diary, because it is: a bound compilation of Sedaris’ real diaries beginning in 1977.

My fellow passenger had chatted to me about the book just as the flight attendant was closing the boarding door; by the time we landed at JFK, I had decided two things: first, that Theft By Finding’s “randomness” was part, maybe even the majority, of its value; and second, that I was going to start keeping a diary again.

NPR called Theft By Finding a “great junk store: chaotic, arbitrary, delightful,” and I agree with that assessment totally. Rather than meticulously recording the events of every day or filling the pages only when inspiration or tragedy struck, which seem to be two popular formats of diary books, Sedaris’s main criteria for what he wrote down seems to be “interesting,” which covers everything from the spectacles put on by the regular customers at a Chicago IHOP to the shock and sadness of his mother’s death. Unlike his essays, which, by the nature of the genre, are structured as a narrative and tailored to elicit laughter, Sedaris’ diaries actually feel like life.

Which is a weird thing to say, given that the book begins with Sedaris hitchhiking across the country working odd jobs and moves swiftly through art school in Chicago, the showbiz success of his sister Amy, to a series of misadventures in New York that coincide with the beginning of his success as a writer. But what I liked best about the book was that rather than coming away with the sense that Sedaris has had a more interesting life than most people, I merely felt that he had a better record of it. In other words, it felt so much like a real diary that I was inspired to start writing one of my own—because even though Sedaris is undoubtedly one of the best humor writers of our generation, I think that if anyone took the time to write down every single interesting thing that happened to them, it would probably be worth reading.

I’ve written before that Sedaris’ tendency toward exaggeration and truth-bending doesn’t bother me, because I think that there are a million ways of telling the truth in memoir that have little to do with actual fact. In Theft By Finding, the believability factor is even more of an issue than his essays, and yet I find myself less concerned than ever with whether or not Sedaris is “lying” to me as a reader. I think anyone Sedaris’ age, in his generation, probably has a million weird stories to tell (I have about ten thousand, and I’m 22), and given his talent for wry observation and a career defined by capturing the truly strange things that occur in his life, he could easily fill a book with nothing but “truths.” But that’s not what a diary is. A diary is an artifact of varying states of mind, the product of narcissism, nostalgia, and perceptions altered if not by drugs than at least by hormones. Diaries are by nature “chaotic and arbitrary.” What feels the most authentic in Theft By Finding is Sedaris’ attitudes towards himself, his surroundings, and his purpose in the world—as well as the fact that these attitudes are constantly fluctuating.

What I do know for certain is that when I’m older, I’m going to want to remember how funny, exciting, depressing or downright bizarre my life is right this second. I definitely owe Sedaris for that reminder.