Outside the realm of comedy, memes are kind of the worst. As any reader knows, words stripped of their context can be used for all sorts of ill purposes. Combine those out of context words with a powerful image? Oof. Combine those words and images with ideas from a book? Double oof. Triple oof. Octuple oof! We are maybe wired as a people to respond emotionally to memes rather than critically. I mean, they use adorable dogs and kitties all the time, which we all know are the shortcut right to our feel factory. I do it, and maybe you do, too. But there is a special place in my personal hell for 1984 memes.

I get why people make them—the book is a political manifesto dressed in the false mustache, nose, and glasses of fiction. But we see it for what it is, or was: a meditation on the terrors of a deceitful, destructive government grown out of control. It’s not a far stretch to apply the book to the times in which we live, by any means. But it’s interesting how both ends of America’s political spectrum hurl 1984 memes at each other accusingly, confident that their own party is the enemy of Orwell’s Party.

It came to my attention when I saw this little number posted in my social media feed. 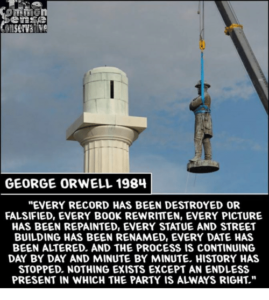 My immediate response was something along the lines of wait—can’t the person posting this understand that attempting to change our records of historical events and attempting to change the way in which we honor or do not honor historical figures who acted dishonorably are very different things? Even if they don’t agree with the removal of monuments, can they at least understand the difference? My internal response might have included some swears, because this meme really got my electronic goat, you might say.

In 1984, Winston’s job is changing historical records to match the present, in order to distort public understanding of the past and eliminate any contextual examination of what’s going on in the world. What a dream gig, right? If set today, maybe Winston would work from a Troll Farm writing memes or disguising rumor as news. Who knows.

The political Left isn’t above using 1984 memes either, of course—“alternative facts” was a gift of linguistic doublespeak. And America has, for a long time now, been at war with an intangible enemy under the blanket term “Terror.” I openly confess I see more fascist warning signs from the far political Right (who generally are more supportive of massive wars and attacks on intellectualism, both of which are features in 1984), but I can understand why big government brings Big Brother to mind for some. Mass surveillance isn’t so good, and government so big that it’s downsized to one singular party is even worse. So Conservatives who read the book as a warning against Liberals do have some grounds to support their argument, to be fair.

It would undoubtedly do us all some good to scroll past oversimplified, over meme-ified snippits and pick up the book and give it a thorough read. The warnings are there, painted in horrific detail, and the warnings are against numbness, against being swept up in floods of the lowest common emotional denominator, against forsaking reason so that others will do the critical thinking for us, against letting a culture become gutted of everything except war and ignorance.

I love 1984, and maybe you do or don’t. I lean politically Left, and maybe you do or you don’t. But maybe we can all agree that misleading 1984 memes, though they may be satisfying to post and feel like you are making an invincible argument against your political enemies, only reinforce one of the tenets of The Party: “Ignorance Is Strength.” And that’s not so good.